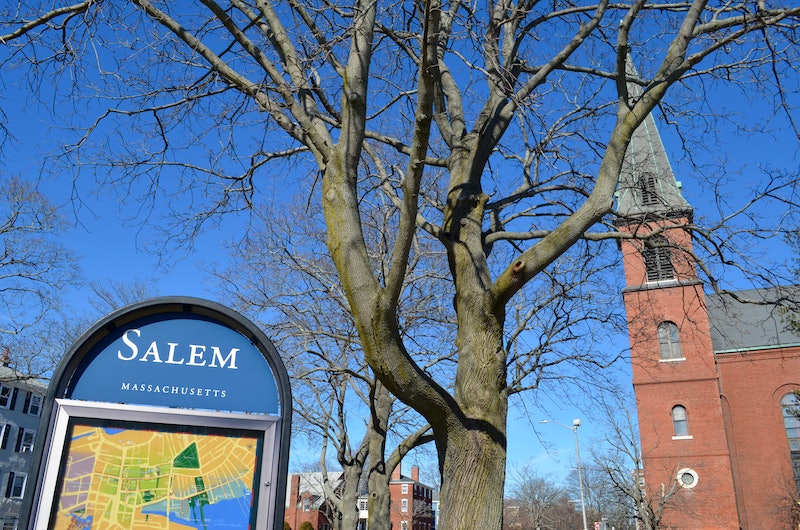 Full confession: When it comes to horror, I'm a total chicken. Until earlier this year, I probably hadn't seen a horror move since 2002's The Ring, and that one led me to spend the night of the screening sleeping in the bed with my mom with the light on. So why then would I make my way to Salem, Massachusetts for a two-day event celebrating the release of Robert Eggers' new horror film, The Witch ? Two big reasons: I wanted to be able to get over my fear, as being a film journalist means being open to all genres out there, and I wanted to get a taste of the supernatural. Luckily, in Salem, I got to do a little bit of both.

My aversion to horror contradicts my lifetime of interest in magic. Like many teenage girls in the '90s, I had an infatuation with witchcraft, performing my share of séances and spells. Even now, I'm generally inclined to believe that magical things exist, which is maybe why horror films frighten me so. Whenever I experience any instance of what I might consider a supernatural occurrence, my first instinct has always been to accept it as truth. Sure, skepticism eventually sets in, but much like The Witch star Anya Taylor-Joy, I sometimes actively seek out sources of magic in the hopes of being persuaded they're real. I'd like to think ghosts and other spooky creatures are real, but believing in horrors makes seeing them on-screen even scarier.

Yet I found myself traveling north to Salem this week to visit the very location where either Satan took hold of 20 people, threatening the very souls of the entire colony, or a grave injustice took place at the result of religious fervor that got extremely out of hand. My first stop was the grey and looming Witch House (above), the only structure remaining from the period of the Salem Witch Trials, which began in 1692, and the home of Jonathan Corwin, one of the judges involved in the trials. Though Salem is the site most associated in this country with witch hysteria, witch historian and expert Emerson W. Baker assured me that witch trials were happening all over the young country, and many had taken place in Europe by the time Salem's begun. Of the 100,000 people throughout history who were accused of being witches, Baker said, about half were put to death. So it was with an eerie hesitancy that I stepped into the house of the man who made some of those killings possible.

"I felt a true air of evil about the entire house, not that of an otherworldly, Satan-imposed evil, but that of unjust persecution."

Standing on his same floorboards as Corwin, who ultimately sent 20 alleged witches to their deaths, once did, I wondered what inherited, primal fear must exist in a person to allow them to declare someone else worthy of execution. "Satan was everywhere," explained Baker, who likened the fear of witches in the 17th century to today's vigilance and fear of terrorism. "Witchcraft was a religious crime. People here were very much in fear for their souls."

The entire house gave me the chills, and not because of the ghosts potentially wandering the rooms; I felt a true air of evil about the entire house, not that of an otherworldly, Satan-imposed evil, but that of unjust persecution caused by such a morally corrupt man.

Yet the House was only the beginning. We soon stopped at the Salem Witch Museum, a refurbished brownstone church from the 1840s that looms over its neighboring square. Red light pours out of the blood-colored stained glass windows, and approaching the building in the evening hours makes for an intimidating sight. Inside, stories of trials and testimonies are depicted in life-size dioramas, with many set high above the museum's visiting eyes. The names of the accused twist in a deep red circle on the floor (seen above). The place doesn't shy away from utilizing supernatural scares; at one point I turned to face what I thought was a dark corner of the exhibit only to find an enormous hanging devil figure appear out of the shadows. I stopped to stare, grasping my chest, and for the first time felt the terror that might have permeated those who feared for their lives over 300 years ago.

For me, having been raised Catholic, possible damnation was always a lingering lesson. But studying their lives, the Puritans' Calvinist beliefs in pre-destination (the fact that your damnation or salvation was decided upon before you even existed and no amount of goodliness on Earth could change your fate) gave me a profound sense of hopelessness. The idea of a devil possessing your soul is less frightening, in my opinion, than having no control over it to begin with.

"My trip was bringing a terror that I didn't expect —the realization that an entire town had let many of their own die because of religious hysteria and backwards views of women."

Then again, it could always be worse, as I saw the next morning, when I visited the Charter Street Cemetery. The area features what's called "The Burying Point," the oldest burying ground in the town where some key figures in the trials were laid to rest. I wove between the graves, noting the names of those who died during the time of the trails, many of which were women; I had come to Salem in search of horror, but my trip was bringing a terror that I didn't expect —the realization that an entire town had let many of their own die because of religious hysteria and backwards views of women.

Next to the cemetery, there is the Salem Witch Trials Memorial, a courtyard surrounded by a heaping stone wall and with a solid slab bench for every executed "witch," featuring each name, date, and method of death engraved in the rock. I somberly stopped at every one, and when I got to the slab for Sarah Wildes, I noticed the remains of a potted plant that had been left, with a burlap label reading, "From your Maine relatives." It was the first time during the trip that I had thought of the witches' lineage. According to Baker and his colleague, author Brinonia Barry, many of the residents of Salem were related to those involved with the trials, and a large number of the bright flowers or memorial trinkets I saw left behind at the graves were left by descendants of both the accusers and the accused.

Even more interestingly, Barry revealed that since the trials, Salem has become a haven for over 3,000 Pagans, Wiccans, Pantheists, and those who call themselves witches and practice what we'd call magic. Said Barry, "The irony is that now Salem is a safe place."

It was at that point that I decided to call Lori Bruno, whom I had met the night before at The Witch's Salem premiere, and see about a meeting. Generally clad in all black, with about 10 long necklaces hanging around her neck, a ring on each finger, and a cane with a silver skull handle, Bruno is known around Salem as an honest-to-goodness witch. According to her biography, she is a Hereditary High Priestess and Elder of the Sicilian Strega line of the Craft of the Wise, founder and Head Mother of Our Lord and Lady of the Trinacrian Rose Church. During the Q&A after The Witch, Bruno offered an intense history of her ancestor, Giordano Bruno, who was burned at the stake for such heresies as suggesting that distant stars may in fact be suns with their own planets. Today, his descendent runs a little shop in Salem called Magika, where she sells magic paraphernalia and performs psychic readings.

"The whole trip reignited a belief in something that I had thought I'd left behind in my teenage spell books."

Perhaps it's just my tendency to impulsively believe in these types of things, but during my conversation with Bruno, she said things to me that suggested knowledge of truths I felt like she couldn't possibly have known were it not for some imbued powers. Earlier in the trip, Witch star Taylor-Joy relayed to me the same sentiment — that Bruno had called out a personal matter of hers within moments of the two being introduced.

Bruno was booked solid that day, but her insights over the phone were enough to convince me to come to her shop and see her colleague Rich, who proceeded to give me a reading unlike any I had experienced before. In the past, my friends and I had dabbled in tarot cards, but this was my first true "psychic reading." I won't divulge all the details of what Rich told me; but I can admit that while, as expected, some of it was vague, other parts were eerily spot on. For example, out of the blue he said, "Your friend is planning a trip to Europe. You should go with her." A good friend is actually heading to Europe in April — perhaps a visit from me is in store. And even the parts of our talk that made no sense at the time have, over the course of the last few days, come true. Rich said there would be a Fran coming into my life; not two days later, another good friend gave birth to her first baby, a girl she named Frances. I might be a skeptic, but each time one of these instances comes true, a little smile pops up on my face.

So while my trip to Salem didn't end up curing my fear of horror; I didn't come away with nothing, either. The Witch still scared the heck out of me, and the whole trip reignited a belief in something that I had thought I'd left behind in my teenage spell books. I'm not saying I'm about to become a Wiccan or move to Salem, but perhaps I'll start taking that world a bit more seriously. The horrors that occurred in that town have imbued it with a 21st century essence of magic, and it's certainly made me consider looking at the spirit world for occasional guidance. Maybe I'll start looking at coincidences a little differently, or maybe I'll get a past life regression. Who knows —maybe in another time, I, too, was a Salem witch.

More like this
A 'Bridgerton' Star Just Dropped A Major Hint About Joining The Live-Action Barbie Cast
By Bustle UK
Who Are The 6 Illuminati Heroes in 'Doctor Strange 2'?
By Grace Wehniainen
The 'Hocus Pocus' Sequel Finally Has A Release Date & It Makes Total Sense
By Shannon Barbour and Radhika Menon
10 Must-Read New Books Out This Week
By K.W. Colyard
Get Even More From Bustle — Sign Up For The Newsletter