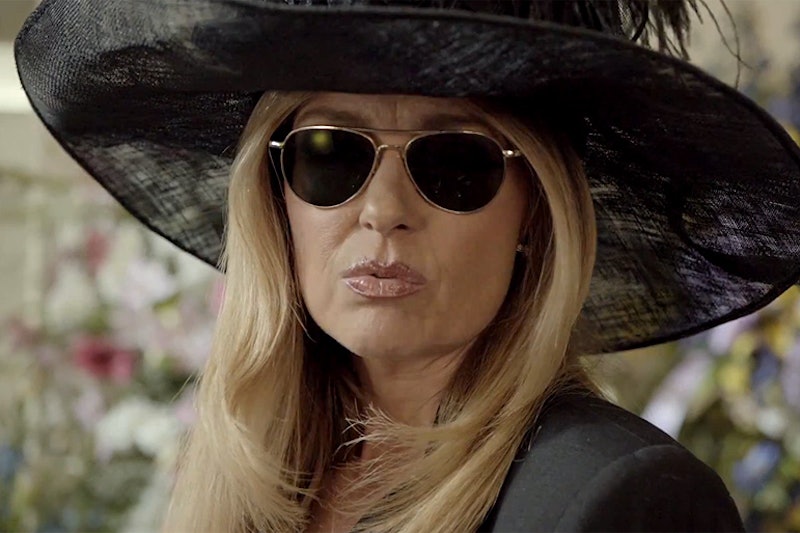 Connie Britton is an incredible actress, who has showed off her acting chops starring on shows like Nashville, Friday Night Lights, and American Horror Story: Murder House. But as Faye Resnick in American Crime Story , Britton shows off a whole other side I never expected to see from her, and it's glorious. Thanks to an amazing performance by Britton, American Crime Story 's "Brentwood Hello" scene is the most insane of the series, airing on Tuesday night. Britton shines as Faye Resnick, playing a character that viewers haven't seen from her yet: A Beverly Hills socialite who wrote a tell-all book about her close friend's murder. It's as close as the audience will get to seeing Britton play a Real Housewife (the real Resnick went on to appear on the Beverly Hills edition of Bravo's reality franchise) and let me tell you, it's spectacular.

In Tuesday night's American Crime Story, Resnick arrives at the office of two men, telling them that her psychic has told her that "Nicole wants you to write a book." Naturally, these two men wholeheartedly agree with dollar signs in their eyes, but more reassuring words coming out of their mouths: "We promise this won't be exploitative." Resnick reiterates that and says she wants this book to tell Brown Simpson's side of the story, since she isn't there to speak up for herself during the trial of ex-husband O.J. Simpson, who was eventually acquitted for the murders of Brown Simpson and Ronald Goldman. That book would become Nicole Brown Simpson: The Private Diary of a Life Interrupted, and the truth of some of its claims have been disputed, as the New York Times reported that Brown Simpson's father called it "T-R-A-S-H." In the most brilliantly insane part of the scene, Resnick munches on carrots and drops tons of claims to use in her book, creating one of the greatest monologues from this series, if not ever. I'm just going to let it stand alone, because wow.

Nicole was a wonderful person. She was a terrific mother. We need to stress that. We had wonderful times together. We'd go clubbing and go to parties, and, you know, Starbucks. Sometimes a little cocaine. We loved to eat at La Scala...There's no good time to find out that your best friend has been murdered, but particularly not three days into cocaine treatment. Did you know that Nicole had breast implants? It was O.J.'s idea, but I'll be honest with you, she loved them. What else can I tell you about Nicole? She loved to give a "Brentwood Hello." It was a little joke we had. She would go into a man's bedroom while he was asleep and go down on him.

It may seem long and super expository, but Britton sells the hell out of it and makes it entertaining in a way only she can. Connie Britton forever.

There's also the incredible irony and meta-ness of the scene that is totally mind-blowing. One of the editors excitedly says "We're going to sell so many copies" and then pauses, to add, "In a non-exploitative way." He, Resnick, and the gentlemen taking notes all give each other a knowing nod, as if to say they know that's a total lie. The subtext is all there and it's gold.

Not only that, but I think it's pretty meta that a series that is dramatizing the Simpson trial has a scene in which two writers/editors are getting information to write up a tell-all/dramatization of Brown Simpson's life. It wouldn't be the first time American Crime Story has gone meta — remember when Robert Kardashian (David Schwimmer) told his kids that fame is terrible? There's something so satisfying about a knowing wink and nod to the present and the "Brentwood Hello" scene adds to the series' perfect use of such moments.

More like this
What Does Michael Peterson’s Family Think Of 'The Staircase'?
By Arya Roshanian
Michael Peterson & Sophie Brunet’s Relationship Timeline
By Morgan Leigh Davies
All The Theories About Kathleen Peterson’s Death
By Morgan Leigh Davies
Jennifer Aniston Joked About Ending 'Friends' With Therapy & Divorce
By Grace Wehniainen
Get Even More From Bustle — Sign Up For The Newsletter