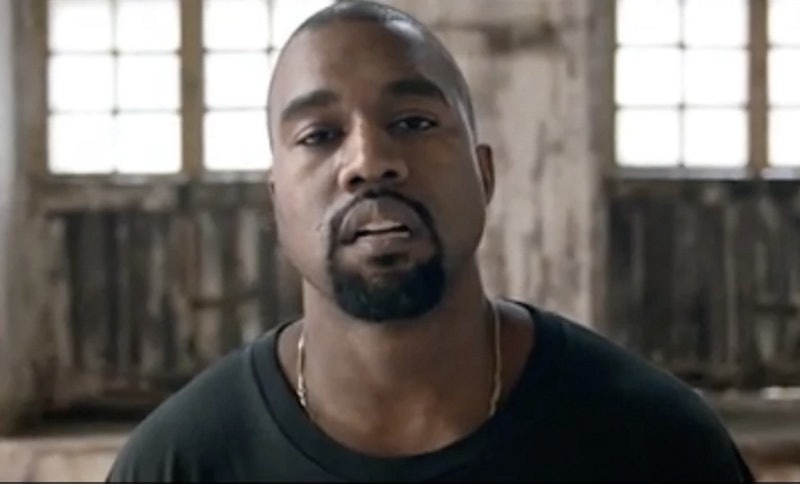 Brace yourselves, Kanye fans, because the artist is showing a whole new side to himself. The rapper may be known for production-heavy tours and performances, but in Kanye's video for “All Day/I Fell Like That,” the artist tries a totally different technique. Instead of technically savvy sets and light shows that are in time with the music, Kanye West is decidedly stripped down for this latest video, which was screened in March of 2015 during his residency for Fondation Louis Vuitton but is only seeing wide release now. If you ask me, this minimalistic video shows Kanye in his truest sense: Without all of the stage production and hoopla that usually accompanies his presence at galas, award ceremonies, and on the road.

Instead, the video captures Kanye as he really is. The video may be nine minutes long, but, from what I can tell, it is a single shot. In the first few minutes, we see Kanye act out his conflicted relationship with the camera and with his own fame, alternating between evading the camera and trying to force it to be on him. The camera chases him around the bare room (with the exception of a few speakers) as the artist raps and dodges in and out of the frame. But, halfway through, it looks like Kanye is exhausted. He’s sweating, he’s breathing hard, and, as the music transitions between songs, you can hear him breathing heavily. It’s 100 percent real. There’s no music to cover up the sound of his breathing, no makeup crew stepping in between takes to make his brow look less shiny.

The message here seems to be one thing and one thing only: It’s hard being Kanye, man. But this is definitely a Kanye West we rarely get to see. With the single-shot style and the shoddy room with barely anything in it (when the camera zooms in on Kanye’s face you can see that the wall behind him is crumbling, that there are cobwebs in the corner), it’s clear that Kanye is showing us the real him, stripped down. Or at least the realest version of him that we’ve seen in his videos.

Of course, the minimalist style of this Steve McQueen-directed video isn’t new for the artist. With his recent fashion line and with his video for “Only One,” which was shot on an iPhone, this bare bones style is becoming a trend for the artist. And, if it means getting more real and closer to the heart of the artist himself, I’m all for it.

More like this
Watch Pete Davidson Joke About The “Really Weird” Kanye West Drama On Stage
By Brad Witter
Kanye Walked Out Of Kim's 'SNL' Monologue Because Of These 2 Words
By Jake Viswanath
Are The Names Of Kim K & Kanye's Kids Tattooed On Pete Davidson's Neck?
By Bustle Editors
Rihanna Says "I Do" To A$AP Rocky In A New Music Video — With Her Grill
By Jake Viswanath
Get Even More From Bustle — Sign Up For The Newsletter