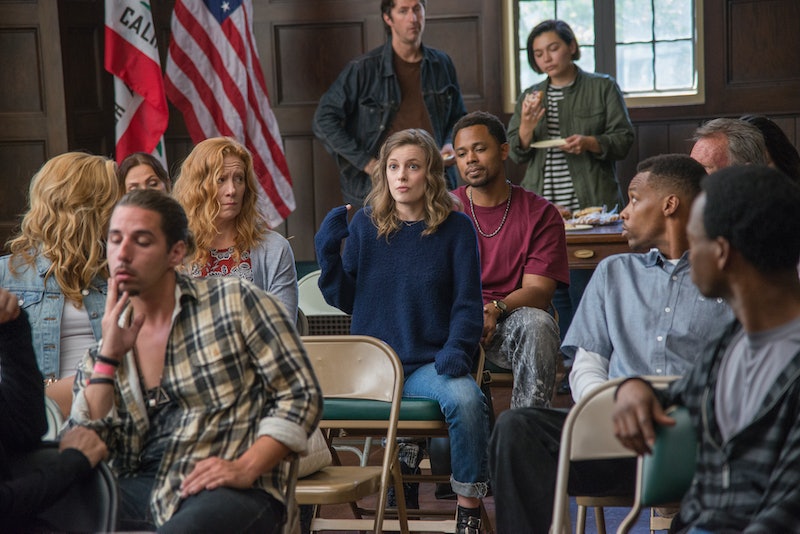 Television is not usually a medium associated with subtlety. While addiction and substance abuse take many forms in the real world, it can feel like television's version of addiction is larger-than-life, especially when watching reality shows like Intervention and Celebrity Rehab. The realm of fiction usually isn't much better, with shows often using substance abuse merely as a way to give a character something difficult to go through. For every show like House and Nurse Jackie that attempts to show the realities of addiction on screen, there's a show like 24 that uses a heroin addiction as motivation for their character, and then seems to forget the addiction when it doesn't affect the main story — or, of course, we get Jesse Spano. That's why Netflix's Love marks an important shift in how addiction is portrayed on television.

On Love, addiction isn't made into a spectacle. Mickey relies on drugs and alcohol to keep herself invested in the world around her, but she never reaches a "rock bottom," which is what many shows would have a character do. Addiction doesn't affect Mickey's job and it doesn't push those close to her away — but it does keep her from connecting with others in meaningful, honest ways. Addiction, in this case, doesn't take something away from her, but it prevents her from living a full life.

In Episode 5 of Season 1, we see Mickey on one of many first days of sobriety while Gus and Bertie go on their disastrous first date. She lounges around her house, unsure of what to do with herself. She reads, masturbates, re-organizes the furniture, resets her sobriety app calendar (which she had been lying to), attempts to enjoy green smoothies — anything to keep her from reaching for a drink or a pill. It raises the important question, when so much of your life revolves around doing drugs and getting drunk, what do you do if you're not doing that? Her only entertainment that evening is pulling the strings of Gus and Bertie's date as it begins to tailspin, but that plays into her other addiction: her relationships with others.

In a confrontation with her co-worker Dr. Greg, he accuses Mickey of "bingeing on other people." While it's part of a harsh verbal attack against Mickey, it's also not entirely untrue. Her many relationships all seem to involve her keeping others at a distance. She gets to know the basic details about her roommate Bertie, but only calls on her when she needs another person to act as a prop to make her feel supported. She gets to know Gus, but forms an idea of who he is and then struggles to deal with his many flaws as she gets to know him better. Mickey's addictions to drugs and alcohol have helped her live with reality at an arm's length away, and that approach to life carries over into her relationships with others.

Mickey's rock bottom isn't a stranger's bed or the side of a road. Instead, it's on the LA subway sitting next to Andy Dick. Dick, playing himself, encourages Mickey to relapse with him and partake in some Sasparilla (which Mickey equates to Ecstasy) and go for a ride on the subway. There's dancing, conversation with strangers, and talk about deeper aspects of living, but something strikes Mickey differently. There's no big revelation about how the people in her life are more important than drugs, or that she doesn't need drugs to be happy — she just realizes it's not fun anymore. Drugs and alcohol used to be the things that made her happy, and now they keep her from being able to appreciate what makes her happy and are allowing her to lose the things that she enjoys about her life. Dick seems to share her sentiment, saying, "Every bad choice I've made is drinking. Everything I've lost — Drinking."

When Dick and Mickey leave the subway, they exchange their NA/AA meeting locations and encourage each other to meet there, where they know they'll see each other because addiction isn't cured — it's managed. Mickey may not be sober, but in that moment, she realizes that she wants to be, which is just as important. She also realizes that drugs and alcohol aren't her only addictions and a few weeks later, she goes to another type of meeting: a love and sex addiction meeting. Addiction takes many forms, and can affect those who struggle with it in many ways. Love understands the small pieces of addiction that stack up and make someone's whole life seem like it's just a conduit for the overpowering impulses that encourage us to drink, smoke, or give ourselves over to something that doesn't make us feel good about ourselves. Love also understands that it only takes little steps to start living a life that doesn't let addiction get in the way of honest, productive relationships with other people, which is what makes Mickey's journey so refreshingly nuanced and important.