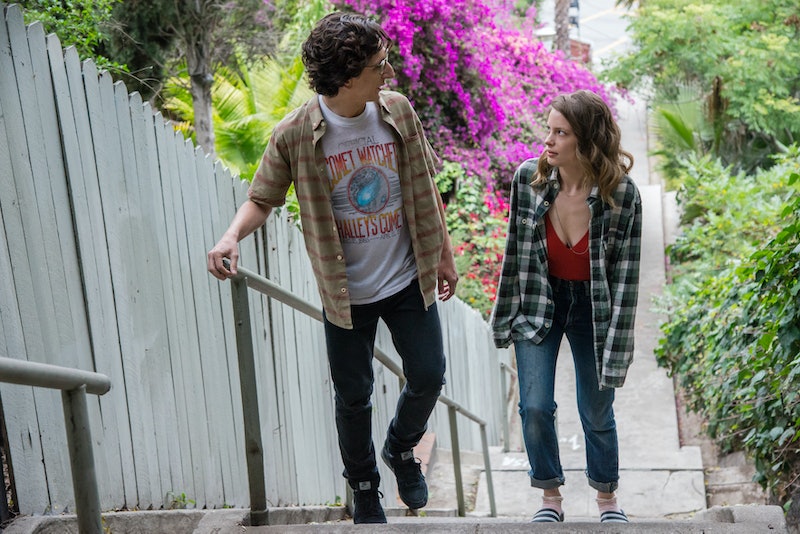 When Gus orders a Sea Breeze in the fifth episode of the new series Love, you know you aren't watching a typical male character. As the male waiter fumbles with the order, viewers of the new series can cheer since Love on Netflix consistently mixes up gender roles, thanks to its lead characters of Gus and Mickey. While the series isn't immune to veering into familiar territory — from Gus being a typical Judd Apatow leading guy to other characters' quirks meeting established expectations from the entertainment industry — Gus and Mickey are on the opposite spectrum of how romantic male and female leads are usually portrayed on TV and in movies.

Gender roles have become more fluid in the media and although it's not at the pace I'd prefer to see, comedic female characters who do not have their lives totally together are finally being embraced. Thanks to movies like Bridesmaids and Trainwreck (which Apatow directed), women who are openly sexual, depend on substances, competent at their jobs, and make bad decisions are finally getting their time in the spotlight. And these women, with all of their strengths and flaws, are loved by not only their friends, but by the characters they have romantic relationships with.

Mickey in Love epitomizes this new brand of female character. She has a slew of ex-boyfriends that she hurt. She cares about her job and the company she works for. She's an alcoholic with a dependency on drugs. She will show up hours late or not at all. The point is: Mickey isn't a 30-something-year-old woman who has it all figured out and is just waiting for the perfect man to come along. She can be the life of the party, but she also has a nice apartment and a steady job that she's good at.

Then, you've got Gus. As previously mentioned, he's the kind of guy who will without shame order a Sea Breeze on a date (with Mickey's roommate Bertie no less) and correct the waiter when he assumes that Gus ordered the red wine and Bertie ordered the Sea Breeze. (My fiancé and I had a similar mix-up with a waiter when I ordered a burger and he ordered a salad, so I could personally relate to this awkward, gender-based assumption.)

Gus is the guy who owns Blu-rays of Pleasantville, Pretty Woman, Sweet Home Alabama, and What Woman Want. He drives a Prius. His ex-girlfriend complained that he said "I love you" too much in their relationship. He's the guy who shows up to a party extremely on time and ends up doing chores for the hosts. Yet, he's also the guy who is willing to cheat to keep his job and excels at writing hilarious songs based on movies.

When the pair first meets, Gus can't handle getting high in the daytime, so Mickey escorts him back to his apartment and tucks him into bed. Later, at the aforementioned party, Gus calls his female friend in the bathroom to overanalyze what he's doing at the party and if Mickey likes him. Meanwhile, Mickey is getting lambasted by her ex-boyfriends, one who still loves her and the other who is busy calling her a wh*re for cheating on him years earlier. She deals with this by deciding to get wasted and turn the party into a rager from her youth.

Both Mickey and Gus are messes and contradictory in their own right, though Mickey's self-destructive tendencies are of the more troubling sort. And while judgemental viewers could use gendered expectations to write off Gus as being too sensitive or Mickey as being too sexual, Love does not encourage those simplistic and derogatory views. Other characters, like their respective exes, may be rude and minimize the characters to such offensive stereotypes, but both Gus and Mickey are more complex than just the "nice guy" and "cool girl." They both can be equally nice and mean. They both can be cool and not cool. But most importantly, both of them do not have their sh*t together.

Typically in the media, women are shown as much mature than their male counterparts (just think back to other Apatow projects like Knocked Up), but anyone living in the real world knows that's not a hard and fast rule. Love is willing to show that these characters, like real people, can't simply be defined by what is expected of them in their gender roles. And beyond that, Love takes it a step further, since the show doesn't even seem willing to make commentary on what Gus and Mickey's gender roles "should" be. Although Love isn't perfect when it comes to dealing with men and women, it is willing to turn an assumption on its head. The crux of the show really is that Mickey and Gus are just two messy people dealing with one of the most messy emotions of them all — Love. Gender norms be damned.