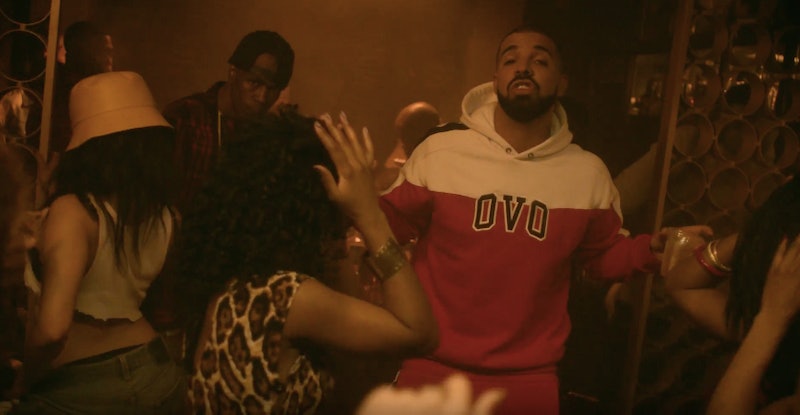 If you've been on the Internet for more than five minutes, there's no doubt you've seen Rihanna and Drake's "Work" music video... or more accurately, both of them. The sultry track off Rihanna's eighth studio album ANTI is enough to get your blood pumping and your computer screen steamy, but throw in two videos and a dollop of Drake in there and it's almost too much to handle. But when you're actually ready to handle it, I want us to take a closer look at Drake hanging in the background and see what kind of physical artistry he's up to. That is, you have to wonder how does Drake's "Work" dance moves compare to his dance moves in "Hotline Bling"?

I know, I know, it almost feels like no other dance moves ever will hold up to the almost beautiful neon-and-blacklight awkwardness of "Hotline Bling." To assume that Drake will live up to that masterpiece, even in a dual music video, is a heavy burden. But I examined "Work" and "Hotline Bling" side by side and saw that he actually recycled some of his most iconic moves... and amped or downplayed others.

So for your entertainment, here is a delightful comparison of Drake's most recent music video dance moves.

Look at Drake, always so progressive, always moving towards the future. In "Hotline Bling" he's free and inhabited to roll on with his arms as much as he wants, but in "Work" he's a bit roadblocked by Rihanna who's like, "Drake, shhhh, stop talking and just hold me."

Pondering The Meaning Of Life

So in "Work" Drake looks as though he's gently thinking about life's bigger question, but then he gets distracted by the hottie in the bucket hat. In "Hotline Bling," though, Drake is solitude and free to get as existential as humanly possible.

Something That Makes Me Profoundly Uncomfortable

It's just... grinding up like that is not my style, ok? It just always looks really lazy, and it seems more like public dry-humping than an actual dance move. That said, when Drake gets low in "Hotline Bling" in a very non-sexy way, that also makes me side-eye pretty deep.

It seems as though Drake's range of motion and, um, direction of shimmying changes when there's a Rihanna involved, as you can see above.

Overall I have to say that "Hotline Bling" Drake is the superior dancing... it really seems like Rihanna's doing all the work in the "Work" video, what with her sick floor-humping and what-have you. But hey, you can check out "Work" below and check out all of the dance moves for yourself.