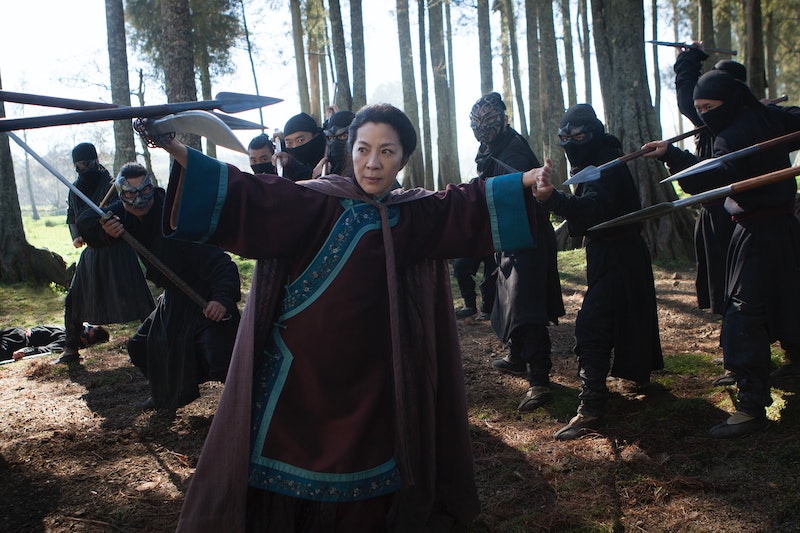 16 years after the original Crouching Tiger, Hidden Dragon film became an unprecedented international success, a sequel is on its way. Crouching Tiger, Hidden Dragon: Sword Of Destiny is a feature continuation of the period Chinese martial-arts drama that won the 2000 Oscar for Best Foreign Language Film. Like the first film, Sword Of Destiny's source material is the Crane-Iron series of novels by Chinese author Wang Dulu. Iron Knight, Silver Vase is the last book in the series, and also one of the handful of titles the movie cycled through while in development. Yuen Woo-ping takes over directing duties from Ang Lee, and the film features a largely new cast aside from returning star Michelle Yeoh. If you were as transported by the 2000 film as I was, then you'd probably like to know where you can watch Crouching Tiger, Hidden Dragon: Sword Of Destiny when it's released on Feb 26.

Netflix subscribers, rejoice. Sword Of Destiny will be released on Netflix streaming exclusively. That means that if you have an account with the service, you can queue up the sequel at no additional cost. You don't even have to put pants on, if you don't feel like it. That's the beauty of nontraditional distribution methods, at least from a consumer point of few. According to a Netflix press release, Sword Of Destiny "tells an epic story of lost love, young love, a legendary sword and one last opportunity at redemption, set against breathtaking action in an epic martial arts battle between good and evil that will decide the fate of the Martial World." In other words, this is gonna be interesting.

Interestingly, the studio's original plans for Sword Of Destiny included a theatrical release. Producer Harvey Weinstein and The Weinstein Company intended to drop the film onto Netflix and into IMAX theaters at the same, giving audience the choice of how they'd like to experience Sword Of Destiny. Theater owners balked at the proposal and withdrew, perhaps to avoid setting a precedent that they saw as being detrimental to the industry in the long run. Deadline reported in 2014 that IMAX operators like AMC, Carmike, Regal, and Cinemark would refuse to screen the film in theaters if it were simultaneously available in other formats. It all raised an important question: with the steady rise of alternative viewing opportunities, how long can theaters avoid being carried along on the wave of change?

There's no easy answer, but for the moment, nix your plans to hit the IMAX this weekend and make sure your Netflix membership is up to date. It's the only way you can watch Crouching Tiger, Hidden Dragon: Sword Of Destiny...at least for now.

More like this
'The Princess Diaries 3' May Go Ahead Without Anne Hathaway
By Darshita Goyal
'Bridgerton' S3 Teases Exciting Social Season For Penelope Featherington
By Bustle
You’ll Be Able To Stream Bullet Train Before The Holidays
By Arya Roshanian and Radhika Menon
How To Stream Knives Out 2: When Will Glass Onion Be On Netflix?
By Radhika Menon
Get Even More From Bustle — Sign Up For The Newsletter