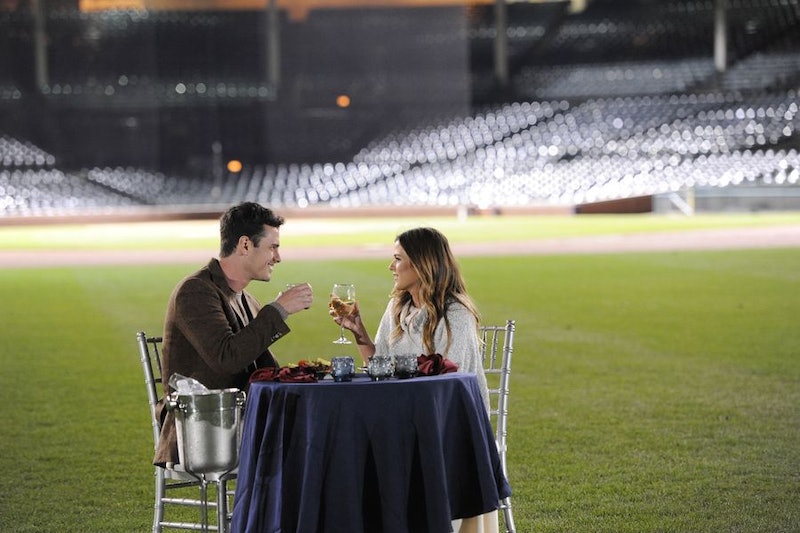 One of the most exciting (and terrifying) weeks of The Bachelor is the hometown dates. At this point in the show, the Bachelor visits four women in their hometowns and meets their family. It's a huge step forward for the relationships on the show, but sometimes it can also be detrimental. On JoJo's hometown date, Ben will meet her family, including her two brothers, Matt and Ben. If Ben Patton looks familiar while on The Bachelor , it's because you might have seen him looking for the love of his own life on another reality show — guess it runs in the family.

In the preview for Monday's episode, it appears that JoJo's brothers accuse Ben of brainwashing the women on the show. (Bustle has reached out to Higgins, but has not yet heard back regarding the accusation.) On Sean Lowe's season, Desiree's brother also questioned the process, and she went home that week. Could JoJo's hometown date threaten her relationship with Ben, too?

He Was On Ready For Love

Back in 2013, Eva Longoria put her hat in the ring for reality TV with her own dating show called Ready for Love. The show featured three bachelors and 36 bachelorettes, and was unfortunately pulled from NBC after two low-rating episodes (but played out on Hulu). Ben, far left, was one of the bachelors on the show. Although he chose a winner, he was rumored to be dating Bachelor 16 's Jamie Otis in 2013, according to Life & Style.

Success runs in the family, according to Ben's Ready for Love profile. According to the bio, Ben has worked in investment banking and investment properties (all while being under the age of 25-years-old). He was "the youngest investment manager" at the sovereign wealth fund for the royal family of Abu Dhabi and, at the time of Ready for Love, was the CEO of a private hospital in Texas.

Ben's Ready for Love bio also says that he has a softer side, having helped build an orphanage in Uganda and donating the profits of his company to a charity.

If Ben Higgins ends up choosing JoJo at the end of the show, let's hope JoJo's brothers grow to like Ben. Just go onto JoJo's Instagram account and you'll see that this family is very close.