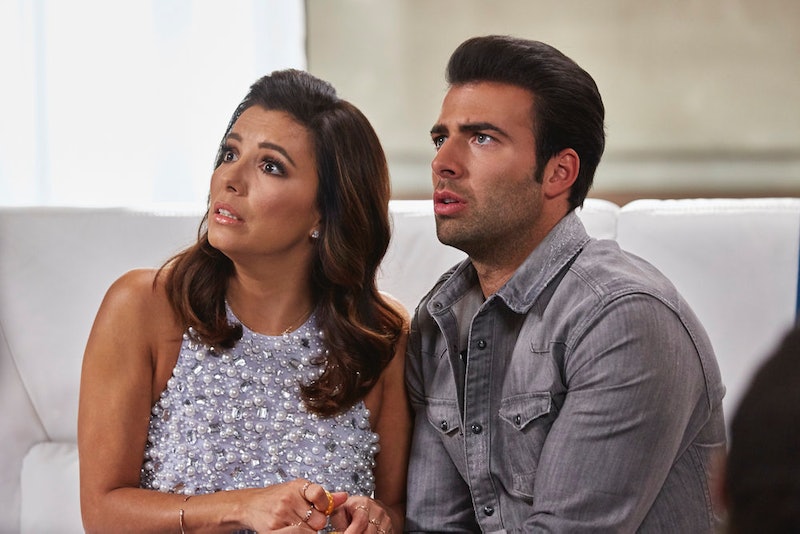 Eva Longoria's return to comedy has been well-received, but will Telenovela be renewed for Season 2? It's definitely been fun seeing Longoria and America Ferrera team up to promote their respective NBC series for commercials and the Golden Globes. The freshman series' ratings have been moderate, so what's the word?

The Season 1 finale airs Monday night, but there's no official announcement from NBC at this moment. In an interview with TVInsider, Longoria said she's hoping for a pickup. "NBC has been super happy with the ratings and the critical acclaim," she said. "They were blown away by all our great reviews. And they’ve been 100 percent supportive from, 'Let’s shoot more promos!' to 'Hey, let’s name Monday Queens of Comedy Night!' They’ve had great social media ideas and are always thinking about how to help the show. It’s a great vote of confidence."

So that's a good sign. There's still plenty of time for NBC to decide, so I wouldn't be too worried. TVLine's Renewal Scorecard lists Telenovela as too early to tell, and I think that's a fair evaluation. The show only premiered in December, so even if it was renewed for Season 2, the new season might not air until midseason — December 2016 or even January 2017. The first season was only 11 episodes long, so that gives them the option to pick them up for another short season or a traditional 22 episode order. This show is in a good position, flexibility-wise.

Plus, with their Monday night lineup and additionally the launch of the streaming subscription service Seeso, NBC is committing to comedy again, and keeping a show like Telenovela on the air would be a smart move. So, keep your fingers crossed!

More like this
'Who Killed Sara?' Won’t Return For Season 4
By Brad Witter
What’s New On Netflix: A Victoria Justice Rom-Com & The Return Of David Letterman
By Arya Roshanian
What’s New On Netflix: The Return Of 'Bling Empire' & A Rebel Wilson Comedy
By Arya Roshanian
Two Iconic ‘00s Doctor Who Stars Are Returning To The Series
By Shahed Ezaydi
Get Even More From Bustle — Sign Up For The Newsletter