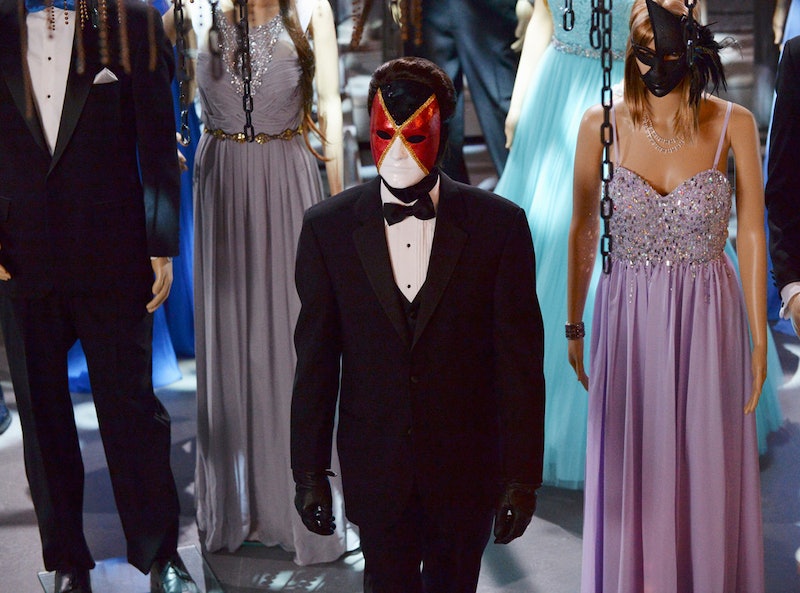 After over five seasons, we're finally approaching the end of Pretty Little Liars ' Big A story. Before summer is over, we're going to know exactly who has been terrorizing the Liars for all these years, and there's absolutely no way that the reveal won't blow our minds. The episodes leading up to the reveal are giving me tiny little brain explosions as is — like the fact that Charles' identity has been hidden from Jason and Ali for a very long time. We learned in last week's episode that Charles was part of their family, and is likely a secret sibling of Jason and Ali, but now a sneak preview for the episode "Don't Look Now" shows that their dad thinks Charles DiLaurentis is dead. Is it possible? Are we looking in the entirely wrong place for Big A? There's a far more likely explanation to how Charles could be both "dead" and Big A, and it all goes back to Sara Shepard's Pretty Little Liars book series. (Spoilers for the books ahead!)

We know that the ABC Family series doesn't always follow the books, and the two stories have diverged a lot. But that doesn't mean that the TV show won't ever borrow from the books. In Shepard's series, Big A is revealed to be Alison DiLaurentis herself, who was put in a mental institution due to a bizarre case of mistaken identity involving her twin sister, Courtney. Ali eventually murdered Courtney and took her place in the mental hospital, waiting for the day she could be released so that she could stalk all of Courtney's friends and take back the life she felt was stolen from her. There's definitely no Courtney in the television series, but that doesn't mean that the show can't borrow the concept — we just need to swap in Jason for Courtney.

Mr. DiLaurentis might not be lying when he says that Charles is dead. Perhaps he really does believe that, because one of his identical twin sons did die. Charles might have forced Jason to switch places with him, just like the books' Ali and Courtney, and then Jason died while everyone still believed him to be Charles. That would mean that Mr. D thinks he really did bury Charles, and the story he told Ali wouldn't necessarily be a lie: he just wouldn't know that the person he thinks of as Jason is Charles.

There are a few holes in the theory — like, say, the fact that Charles and Jason don't necessarily look like identical twins — but I'm not completely writing off the idea that Charles could have faked his death in some way. It's an interesting twist to borrow from the books, and the TV show could really make this story its own and tweak the details in exciting ways. Only time will tell what really happened to Charles, but there's no way this guy is really dead and gone on Pretty Little Liars. For more theories on Charles' supposed death, check out Bustle's PLL podcast below.