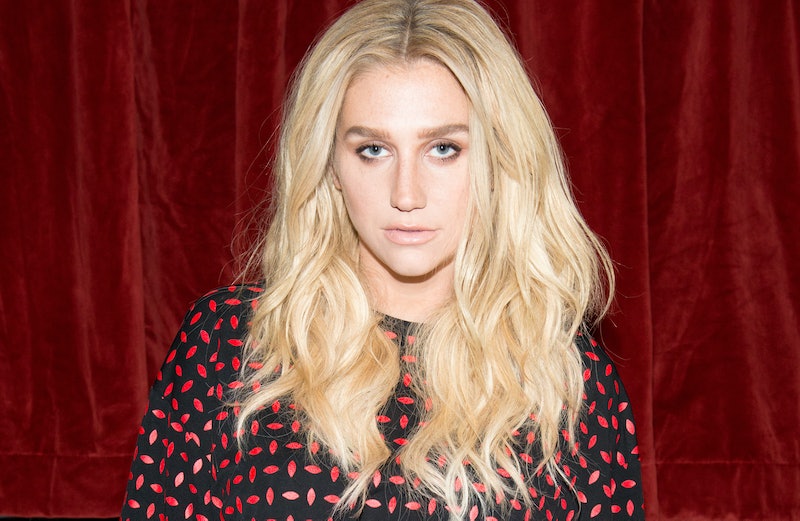 Lena Dunham stands with Kesha. The Girls creator and star made this very clear in her latest Lenny Letter. Dunham begins her essay “Why Kesha’s Case Is About More Than Kesha” with: "When I saw the outcome of Kesha’s court case last Friday, I felt sick.” Last week, the Manhattan Supreme Court in New York City denied the singer's request to be released from her current contract with Sony. This ruling comes nearly two years after Kesha accused her longtime producer at the company, Lukasz "Dr. Luke" Gottwald, of assaulting her sexually, verbally, and physically over the course of a decade. Dr. Luke has repeatedly denied these allegations, and has countersued Kesha for defamation. The image of Kesha crying in the courtroom after the verdict is one that has struck a lot of people, specifically female celebrities, who started tweeting their support via the hashtag #FreeKesha. But as Dunham points out, just as Kesha's case is about more than Kesha, this very public support for Kesha isn't just good for her. It's good for all women.

Every tweet, Facebook post, comment, and essay about Kesha shows that women who come forward to talk about abuse will not be ignored. Even better, they will be supported for their bravery in standing up for themselves. It's something Lady Gaga mentioned in a tweet: "There are people all over the world who love you... And I can say truly I am in awe of your bravery." Taylor Swift donated $250,000 to Kesha "to help with any of her financial needs during this trying time," according to a statement from Swift's spokesperson. Dunham's boyfriend Jack Antonoff tweeted that he would produce music for Kesha and "leak it" or just "wait until that creep can't block [her] anymore."

Demi Lovato tried to push the conversation further. In a series of tweets, Lovato urged more people to speak out not just for Kesha, but for any woman who has been "shot down, not believed & disrespected for their bravery in taking action." "I'm ready for women to be taken just as seriously as men," she wrote, before writing the many ways she would define "women empowerment."

Dunham gets at a similar sentiment in her essay, making it clear that Kesha's case isn't just about a pop star fighting to make another album "free from a man who she says terrifies her." No, as Dunham writes, "What’s happening to Kesha highlights the way that the American legal system continues to hurt women by failing to protect them from the men they identify as their abusers.”

As Alice Vachss, an assistant district attorney in New York who specialized in sex crimes, told The Washington Post in 2003, victims of sexual assault are also victims of "rape myths." This idea that a woman is not a "real" victim if she didn't fight her attacker, if she spent time with her attacker before the assault, and/or if she continues to spend time with the attacker after the first assault. Kesha's claims, unfortunately, fall into all of these categories, which make it harder to find solace in the legal system. Vachss says that we cannot promise "those coming forward with reports of rapes that they will be treated with the same neutrality that we treat someone reporting burglary or armed robbery."

Because of this unfair scrutiny, which often includes the victim's sexual history, Vachss said that alleged victims do not get fair trials. But when they do, there is one clear difference: "I have seen some dignified, skilled, extremely effective defenses in sexual assault trials. What they all had in common is that they spoke to the facts at issue, instead of trying to smear the witnesses."

After the recent court ruling, Dr. Luke's lawyers released a statement to Rolling Stone, claiming that Kesha's accusations are untrue and that she has “cavalierly subjected Dr. Luke and his family to trial by Twitter, using a vicious smear campaign to ruin his reputation for financial gain while failing to support their claims.” Dr. Luke tweeted, "It’s sad that [Kesha] would turn a contract negotiation into something so horrendous and untrue."

While the hope is that the American legal system is there to support the people who need it most, there are many laws that seem to work against the survivors of sexual assault and abuse. They turn those who come forward into double victims: first through the assault, and then at the hands of the system. As Dunham points out in her essay, the Rape, Abuse and Incest National Network (RAINN) reported that 19 states in America still allow rapists to have parental rights over children born from rape (while only seven of those force these rapists to pay child support for those children if their parental rights are terminated).

Dunham comes out in support of Kesha, but her real message is that women and men need to put our personal views on this specific case aside and look at the larger picture. As a society, we need to show support for survivors of sexual assault by looking to change the laws that do not benefit them, by making sure that no law is used to keep victims from reporting their assaults for fear they will be persecuted. Kesha's case has been very public, playing out both in the legal court and the court of public opinion. And while Twitter hashtags are a good way to show support, they will not solve the much larger problem of how sexual assault cases are handled.

It's true that in the past few years, the media has started moving away from blaming alleged victims. We've seen this in the ongoing Bill Cosby allegations, with many publications reporting on the more than 45 women who have accused the comedian of drugging and sexually assaulting them in a way that doesn't question their motives. Instead, it is Cosby and his lawyers who are doing the questioning.

But the example of Cosby's accusers — who have historically not seen much support from the legal system — doesn't mean we've fixed the problem of how society views victims or those who assault them. A recent SB Nation story about convicted serial rapist Daniel Holtzclaw, which tries to deny that the former police officer abused at least eight black women by choosing to only show his side of the story, saw backlash from many, who saw it as tone-deaf and insensitive to survivors of sexual assault. This included the outlet itself, which deleted the story and issued an apology: "There is no qualification: it was a complete failure."

"Failure" is a good word to not only describe that article, but also how the legal system handles sexual abuse cases. More people need to speak out about these failures to show that we stand with the victims of these crimes. That it is their alleged attackers who are on trial, not them, and that anyone on trial is innocent until proven guilty. When we stand with Kesha, we stand with all women. But more importantly, in standing with alleged victims of sexual assault, we send the message that our laws need to protect those who need the protection most — those who were brave enough to come forward.