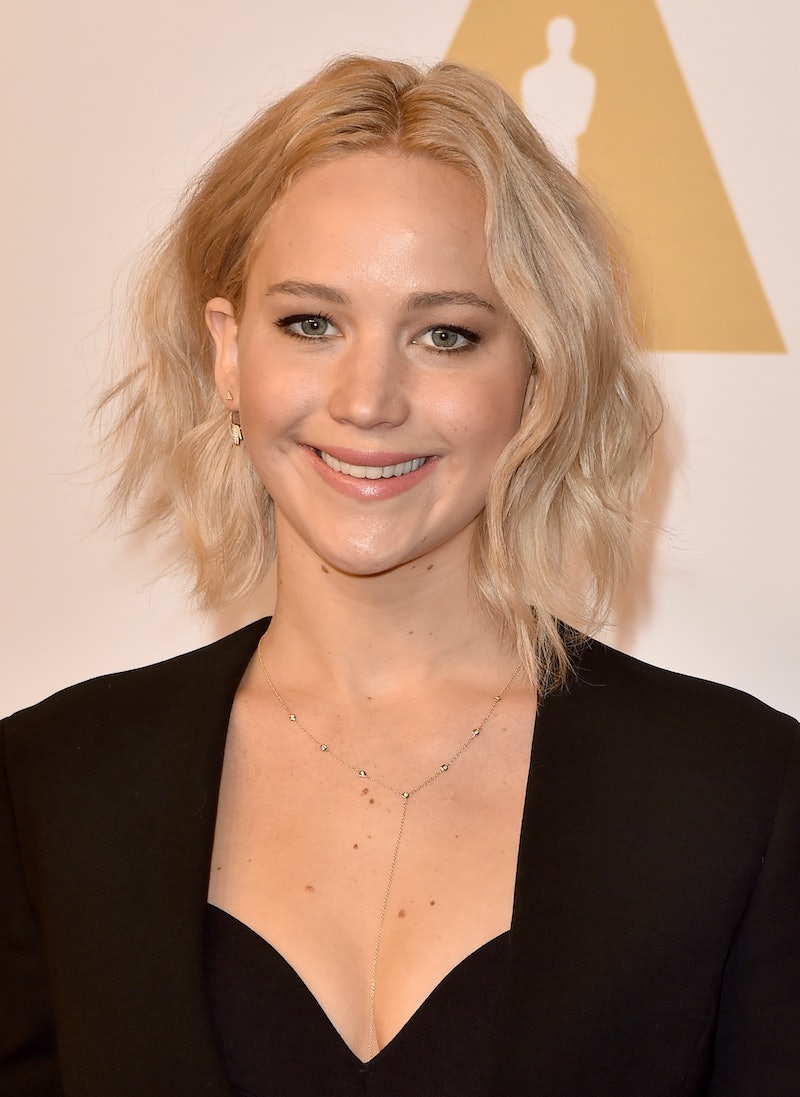 Another Oscars ceremony, another opportunity for Jennifer Lawrence to take home another award. This year, Lawrence is nominated for Best Actress for her starring role in Joy, and even though she's up against some pretty tough competition, this means we have a serious shot at enjoying yet another endearing speech (and fall down the stairs) from her. And although I'm pretty sure she's currently more concerned with more important things, like whether or not she's going to win and what fabulous dress she's going to wear, I can't help but wonder who Jennifer Lawrence's Oscar date will be. You can't take just anyone to the biggest night in entertainment!

Unfortunately, a definitive answer to that question doesn't exist. Lawrence, who happened to release a very gracious statement on how happy she is to be nominated, has yet to reveal who she plans to bring with her. Will it be a friend? Will it be an actual date?

But knowing Lawrence and her usual crowd, I have a few guesses about who could be on her arm come Sunday night. And honestly, I'd be happy to see any of these people with her... although if they aren't into it, I'll totally go in their place.

Since Lawrence and Schumer are super BFFs these days, it wouldn't be surprising if she decided to bring her as her date. Plus, I have a feeling the red carpet photos would be hilarious. Their friendship is just so adorable!

Lawrence has been spending a lot of time around Ansari lately, and even if they aren't dating, it would be really cute if she decided to bring him with her. As far as I'm concerned, Ansari is the ideal date to an event like this, which I can imagine gets a little stuffy. Having him in the chair next to you, doing funny commentary all night? Sign me up.

In 2014, Lawrence's real life best friend, Laura Simpson, was her date to the Oscars, and she wrote a feature on MySpace (yes, MySpace) about what it was like to be her date. It was equal parts funny and interesting, so if they decide to keep the tradition alive, I hope Simpson provides us with another post like this.

Lawrence is close with her parents and does occasionally bring them with her to events, so this one wouldn't be a shocker. Although, she did say her mom made her do a lot of chores growing up, so leaving her at home could be the perfect delayed revenge...

There is absolutely no evidence that this relationship has been resurrected, but stranger things certainly have happened. It's at least a possibility — albeit a teeny, tiny one.

Whoever Lawrence decides to bring is super lucky — and no matter what, they're going to have fun. It's the Oscars. But if I had to pick one? Amy Schumer, all the way. Fingers crossed!

More like this
Long Live Bennifer!
By Allie Jones
'Heartstopper’s Joe Locke Is Manifesting A Jennifer Coolidge Cameo Next
By Nola Ojomu
Watch The Dramatic First Trailer For Netflix's Jennifer Lopez Documentary
By Alyssa Lapid
'Dirty Dancing's Jennifer Grey On The Tearful Moment That Changed Her Relationship With Patrick Swayze
By Sam Ramsden
Get Even More From Bustle — Sign Up For The Newsletter