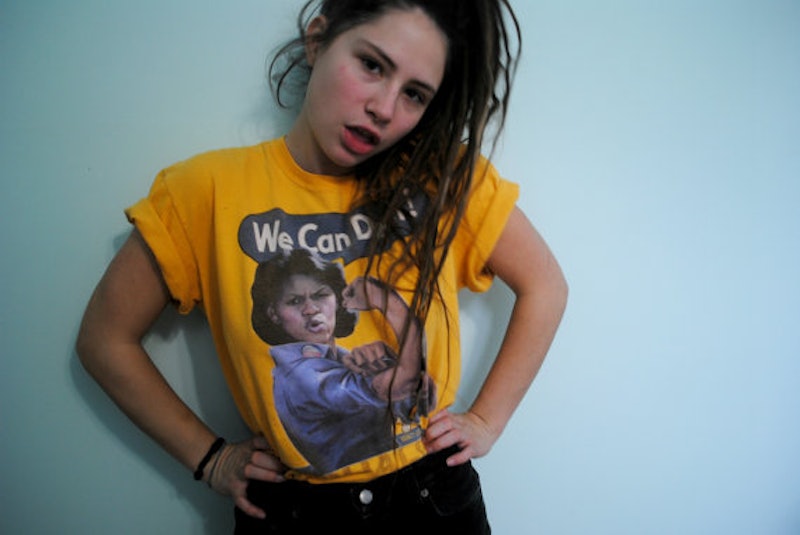 Feminism is awesome. It fights long-entrenched gender inequalities based on the really fundamental belief that women deserve the same economic, social and educational privileges as men. (Not that hard, really.) There are a lot of undeniable plus-sides to being a feminist, from standing up for your fellow women to being on the right side of history, but science is also finding that feminism and the equality it creates can have some serious health benefits, too. Quoting Chimamanda Ngozi Adichie can make us healthier? Sweet, let's get campaigning!

There are several relationships between feminist thinking and better health outcomes. One is that of consequences: better equality, for instance, leads to more wealth for women, which tends to lead to more access to healthcare, more educated decisions about childbearing, and other health-positive stuff. Another is a bit more direct: it seems that thinking like a feminist seems to have genuine positive psychological benefits for our mental health. And then there's the health benefit of having a medical system that takes women's pain seriously, which is definitely a feminist issue.

Here are five different ways in which being a feminist will boost your mental and physical health, from the more abstract to the tangible. A dose of feminism may keep the doctor away more effectively than any old apple.

Feminism is about many things, but one particular fight is about the right of all women for equal access to education at any level. And educated women are healthier women. Why? It's actually a pretty complicated answer, but Kathy Matsui of Goldman Sachs sums it up nicely: "Educated women are better at managing their own and their family’s health issues, thereby reducing infant and maternal mortality, as well as health-care costs, and improving demographic structures."

Some landmark studies have found that having a feminist outlook seems to impact positively on women's capacity for depression and general psychological wellbeing. A famous 1982 study of 73 women in Connecticut showed that joining a "feminist consciousness-raising group" seemed to improve self-esteem and lower feelings of depression, while another study from 2002 of 244 women found that being a feminist was associated with better psychological wellbeing all-round. They're small samples, but it seems thinking of your gender in an empowering way may be a serious psychological boost.

In more abstract terms, there's been discussion recently about how feminism is trying to combat the devastating psychological effects of patriarchy, which cause real damage to mental health across both genders. (The high rate of suicide and depression among men is often connected to the emotional straitjacket placed on them by expectations of toxic masculinity.) Meanwhile, the World Health Organization explains that women's mental illness can be significantly linked to "gender-based roles," and that "gender based violence, socioeconomic disadvantage, low income and income inequality, low or subordinate social status and rank and unremitting responsibility for the care of others" are all serious contributors to female mental health problems. Equality is clearly in everybody's best interest.

This seems pretty straightforward: the more a woman is allowed to participate in the workforce at an equal level, including owning businesses and having significant assets (a process called "economic empowerment,") the more likely it is that she'll be able to keep herself healthy. An entire conference was based around this idea in 2015, and points out that it's a self-fulfilling cycle. Women who are economically engaged "are more likely to have fewer children, more likely to access health services and have control over health resources, and less likely to suffer domestic violence," the conference found, and healthy women can take on economic responsibility with confidence. It's a win-win.

There is another side to this, though. A now-famous study published in 2005 of Swedish couples found that women who had more "equal" as opposed to "traditional" jobs and income in the 1980s were more likely to get sick or die early. (The study didn't focus on educational factors.) Scientists behind it think there's a double-work problem here; women who were in the workforce were often shouldering domestic burdens too, which would cause increased stress and risk of illness in anybody. And the danger of death and illness are raised if you enter an occupation with high risks, like mining, which is traditionally male. But it's important to understand that striving for equality in an unequal world may take its toll.

Feminism attempts to correct gender-based misconceptions and myths. That's one of its most basic purposes. And one bit where it's particularly of use is in the chronic, gendered underestimation of women's pain. When compared to men, women are believed far less when they state they're in excruciating agony, resulting in longer emergency room waiting times and chronic medical conditions being overlooked or minimised. Why? Because of what Hannah Bradby calls "the myth of female frailty;" women are seen as weaker, more dramatic and less capable of handling this stuff, and so aren't believed as readily.

Bradby also points out that this gendered problem creates diagnostic difficulties: women are less likely to be accurately diagnosed with heart disease than men, with doctors instead attributing symptoms to "age," even though it is the number one killer for women. Alongside the myth of frailty, apparently, we've also got to combat invisibility. Feminist jumping up and down seems necessary right about now.

5. Feminism Lowers Your Risk Of An Eating Disorder

This isn't just supported by one study; it's supported by 26. In 2009, scientists compiled a meta-analysis of 26 different studies in North America looking at links between feminist thinking and a lowered risk of eating disorders. And while the studies themselves differed, the results were pretty solid: particularly among older women and actively engaged feminists, there was a strong positive link between feminism and better body image, and a negative relationship between feminist thoughts and eating problems.

"It is proposed that a consolidated feminist identity that likely exists among those who proclaim themselves to be feminists, and who have had a significant amount of experience with their feminist identity, helps protect against extreme dissatisfaction with the body that can result when one internalizes unrealistic cultural ideals," the study reads. Developed feminist identity also coincided with fewer signs of eating disorders. Even though this is just a North American slice of thought, it's still important: a good body image is essential to good health. High five to feminist thinking.

More like this
An Honest Review Of The TikTok-Famous WalkingPad
By Kaitlyn Wylde
How To Protect Your Digital Privacy If You Need An Abortion Post Roe v. Wade
By Kaitlyn Wylde
Sandra Bullock, Girlboss Extraordinaire
By Matt Harkins & Viviana Olen
5 Crystals To Lower Your Anxiety
By Megan McCarty
Get Even More From Bustle — Sign Up For The Newsletter