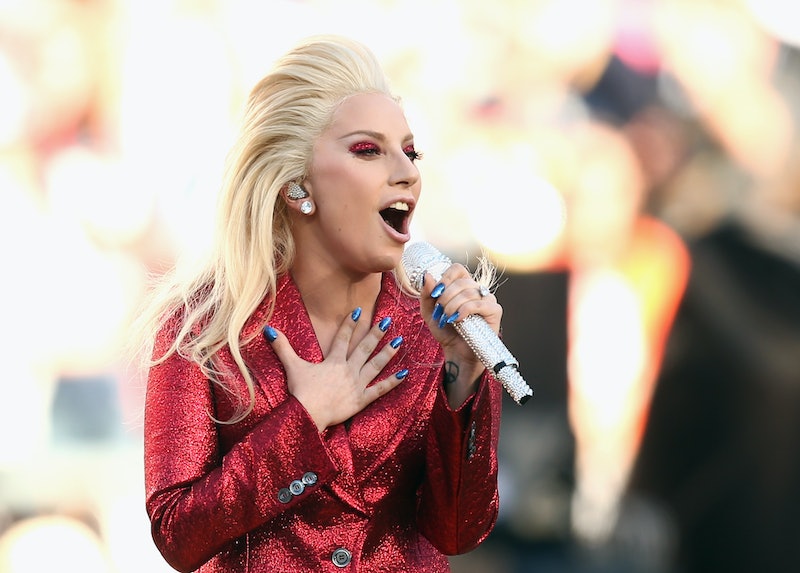 Lady Gaga has always been outspoken on the topic of sexual assault. Since the pop singer isn't afraid to speak out against injustice, it's unsurprising that a song she co-wrote on the subject of college campus rape is nominated for Best Original Song at the 2016 Oscars. Co-written with Diane Warren, who has previously had seven songs nominated in the Best Original Song category, "Til It Happens To You" is from the documentary The Hunting Ground. As well as being an aesthetically beautiful song to listen to, the "Til It Happens To You" lyrics are heartbreaking and hard-hitting on an issue that is close to Lady Gaga's heart.

Never one to shy away from controversy, the singer stands up for people everywhere who have suffered college campus sexual assaults, and helps to highlight what a devastating problem it is. In 2014, Lady Gaga revealed that she was raped as a teen, and, since then, she has continued to raise awareness of the topic. As such, the lyrics of "Til It Happens To You" are a political statement, as well as a personal and emotional message of support to victims everywhere. Enlisting Lady Gaga to co-write and perform the song was such a good move on Diane Warren's part, because no one else could bring the level of honesty, vulnerability, and power to the music that the singer does. And the lyrics of "Til It Happens To You" are inspirational.

The song is filled with emotional statements from start to finish, and never backs down. Victims of sexual assault and rape are often not believed, or struggle to get a conviction against their attacker, and the lyrics tackle this major injustice in the most subtle of ways.

By repeating the sorts of platitudes people may hear following an attack or assault, Lady Gaga highlights how difficult it is to understand what an act of such violence feels like. By asking, "Tell me how the hell could you know? How could you know?," Lady Gaga poses an important question. If a person hasn't experienced something, how do they know how it might impact somebody's life?

The chorus reinforces this thought:

In simple and clear lyrics, Lady Gaga gives a voice to those who have experienced sexual assault, to all those people who have been dismissed, or had their claims or cases ignored. She also examines the devastation that is left in the wake of an attack or sexual assault.

"Til It Happens To You" is a powerful song, with an important message. It encourages listeners to not judge somebody, or dismiss their experiences, without first trying to understand what they may have been through — even though that understanding won't be perfect or complete. Lady Gaga's message in "Til It Happens To You" is clear and strong, and offers support to people everywhere who may have had to deal with sexual assault. So it's absolutely no wonder it's been nominated for Best Song at the Oscars.

More like this
Tom Cruise Gives His Honest Review Of Lady Gaga’s New Song For 'Top Gun: Maverick'
By Hugh McIntyre
Remember When Benedict Cumberbatch Announced His Engagement In A Newspaper Ad?
By Hugh McIntyre
Spice Girls’ Net Worth: The Richest Member Is Wealthier Than The Rest Combined
By Hugh McIntyre
Harry Styles Called For "Backlash" In Powerful Statement On Abortion Rights
By El Hunt
Get Even More From Bustle — Sign Up For The Newsletter