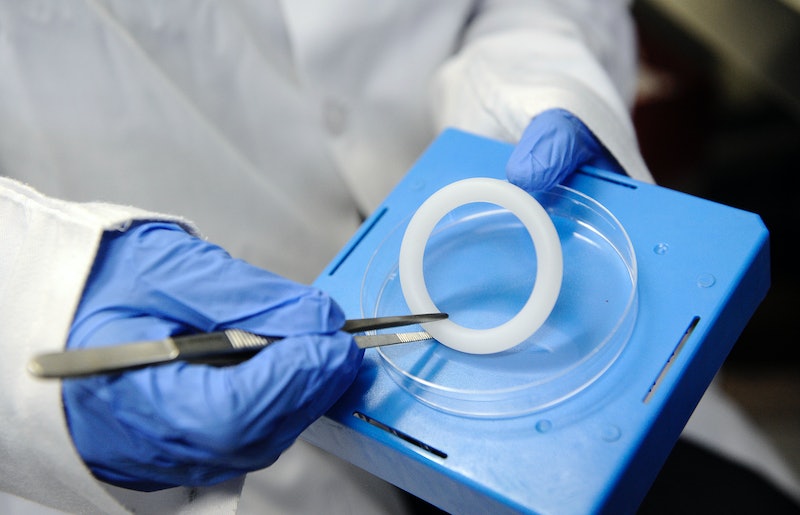 Two medical research groups have presented findings that a vaginal ring may successfully prevent HIV transmission after the ring reduced "HIV cases [in ring users] by about 30 percent." Both research studies were presented at the Conference on Retroviruses and Opportunistic Infections in Boston on Monday, and one of them was published in the New England Journal of Medicine today. Though scientists have been developing the ring for over 10 years, these are the first studies to actually show its potential to prevent HIV transmission through vaginal intercourse. The ring will only cost $5.

The study published in the New England Journal of Medicine took place over a time span of almost two years in Zimbabwe, South Africa, Uganda, and Malawi. Throughout the study, 2,600 women volunteers living in these countries tested the vaginal ring, and by the end of the research, 27 percent of the women using the medicinal ring had "fewer HIV infections than a control group who had a placebo ring." Inside of the vaginal ring is dapivirine, an antiretroviral drug that works by stopping the virus's ability to "[make] copies of itself" within a person's body. Dapivirine is a form of PrEp (pre-exposure prophylaxis), and the ring releases dapivrine into the vagina at a slow rate so that surrounding cells cannot be infected by HIV-positive fluids. The currently unpublished research by the International Partnership for Microbicides, which was also presented at Monday's conference, focused on women in Uganda and South Africa, and found a 37 percent reduction in the rates of new HIV transmissions in women who were older than 21.

Women's Ages And Consistent Use Impact The Ring's Effectiveness

Both studies emphasize that the ring is much more effective at HIV prevention when used consistently, meaning worn daily and replaced monthly (like the NuvaRing). The studies also discovered increased effectiveness in users over the age of 21. In the New England Journal of Medicine study, HIV cases were reduced by over half (65 percent) in women older than 21, while it didn't really appear to work well for younger women. In the other study, the ring similarly "had no visible effect in women younger than 21," while older women's rates of HIV had, again, dropped by 37 percent. The scientists believe that this link between age and effectiveness likely exists because older women may use the vaginal ring more responsibly, keeping up with monthly replacements, etc., though more research will have to be done to eliminate the possibility of a biological cause.

An HIV prevention device specifically made for women is extremely exciting. 35 million women around the world are diagnosed with HIV and most live in sub-Saharan Africa, leading many HIV/AIDS experts to comment on the ring's potential to especially help African women, as reported by BuzzFeed News. Dr. Jared Baeten, who teaches global health, medicine, and epidemiology at the University of Washington and was the lead author on the New England Journal of Medicine study, told BuzzFeed News, “A prevention tool like a ring could be used discreetly, a woman would have control over it, and it could allow her to keep herself safe from HIV without having to ask a male partner to take on prevention strategies... That individual control of prevention is so powerful.”

Dr. Baeten also told The New York Times, "I remember really vividly talking with some of the participants... and they would say, ‘This ring is mine,' ...There was ownership of the ring because she could control it.” Women's sexual partners also cannot feel the 2.5 inches wide ring, so they don't even have to discuss it should they choose not to. They can take control of their sexual health in a world where HIV/AIDS is stigmatized and people are shamed into not disclosing their status openly.

What Other Forms Of PrEP Are Available?

Truvada, a daily pill, is the only other form of PrEP on the market and was FDA-approved in 2012. With consistent and correct use, it has been found to reduce HIV transmission by 92 percent. Experts stress that we should not depend on only one kind of HIV protection device, and researchers should work to develop multiple options. Dr. Baeten compares the need for diversity in PrEP to the diversity of birth control, as he told BuzzFeed News that a daily pill may not be realistic for all women.

More Research Must Be Done, But It's Still Great News

While this is clearly an amazing development in HIV/AIDS research, scientists caution that it is just the beginning. Mitchell Warren, executive director of HIV-prevention group, AVAC, told BuzzFeed News, “There is absolute reason to celebrate. But 27 percent is a lower number than any of us would like to see... But 1 in 3 infections were prevented overall — and that’s huge.” We don't yet know the worldwide impact that this vaginal ring will have on HIV/AIDS, but as Dr. Baeten told the New York Times, “It gives me tremendous optimism.”