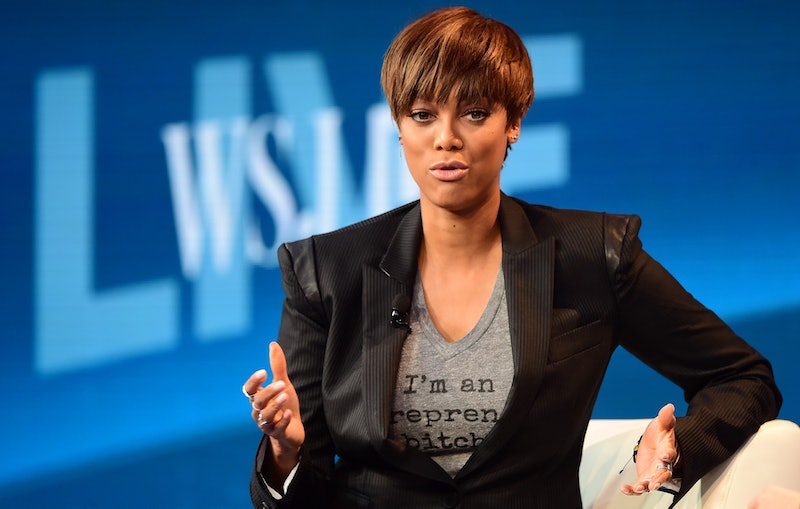 Get that smize ready, because the hit modeling competition show, America's Next Top Model, is coming back for it's 23rd season. Except, instead of being on the CW, the 12 year long show will be continuing on its latest channel, VH1, and, according to CBS' chief licensing officer, Scott Koondel, this new platform is the "perfect partner" to help "breathe new life into one of the greatest unscripted franchises on television." However, it's not just a new network that the previously cancelled competition show is getting. Sadly, America's Next Top Model won't be hosted by Tyra Banks, as the model is going to stick to executive producing this time around.

I know. It's heart-breaking. Honestly, what even is America's Next Top Model without Tyra Banks at it's forefront? However, with a brand-new baby boy in her life and her new-found focus on her beauty products, there's only so much she can fit into her schedule. And it seems as if executive producing is just more feasible at this time. "I will continue as Executive Producer, but must turn my attention to new business endeavors, so I want to find a new host," Tyra Banks said on the news, "I’m pumped to identify that person and bring back the show. Top Model fans, you demanded that the show come back, and VH1 answered the call. Get ready for a fierce-a-fied rebirth!”

But, as excited as Tyra is about the new change, fans must still ask a pretty tricky question: Who is going to host ANTM in it's new season? Here are some of the possible contenders that might be able to keep the show just as fierce as Tyra did. And, yes, those are some stylish shoes to fill.

Despite having her own baby on the way and a hosting position alongside LL Cool J on the popular show, Lip Sync Battle, Teigen would be the perfect match for show. With her modeling background and hosting experience on Banks' recently cancelled talk show, FABLife , she has the perfect amount of experience behind her in both the fields of modeling and hosting. Plus, being a close friend of Banks certainly has to help.

If anyone knows fashion and style, it's Joe Zee. As one of the main hosts for the show FABLife, Zee proved that he knew a thing or two about looking good. And now the stylist, journalist, and creative director has an opening in his schedule.

Miss J was a staple on America's Next Top Model for its entire 22 season run. He knew how to bring the glam, give some spot-on advice, and not hold back. And, honestly, with ANTM reportedly "ending," he was probably one of the people you were going to miss seeing on television most. As the only judge on the show just as long as Banks, this time he's meant to be more than just a judge — he's ready to be the show's host.

Another frequent judge on America's Next Top Model was none other than make-up artist and creative director, Jay Manuel. The former judge and producer (including a brief executive producing stint for Canada's Next Top Model) is not only more than qualified, but he also continuously appears on shows to talk all things fashion.

If anyone knows about all things modeling, it's a fashion photographer. Sometimes being behind the camera itself is all it takes for someone to develop a keen sense of what smize works and what smize doesn't. Which is exactly why America's Next Top Model alum, Nigel Barker, is yet another one of the shows frequent judges who should be on the hosting list. In fact, just this past year, Nigel appeared on Australia's Next Top Model to provide some more feedback after leaving the Banks-helmed show in 2012.

Out of all the America's Next Top Model winners, one of the clear success stories has to be Eva Marcille. The model, actress, and host won the show's third cycle and used her win to expand her career in all areas of the business. Recently, she starred on TV One show, Born Again Virgin, and she will be sharing her own entrepreneurial story on BET's docu-series, About The Business. Hosting ANTM would be a great way to give back.

One of Banks' close friends in the modeling business is none other than Heidi Klum. The model and former Victoria's Secret Angel has held close ties with the ANTM host over the years and, if anyone can compare to Banks' stature in this business, it has to be Heidi. She was supposedly in the running for taking over Banks' FABLife job before the show reached its end, which could only mean one thing: She could be on the look-out for her own fashion-themed hosting position.

So, who will be America's Next Top Host? It looks like we're just going to have to wait and see.