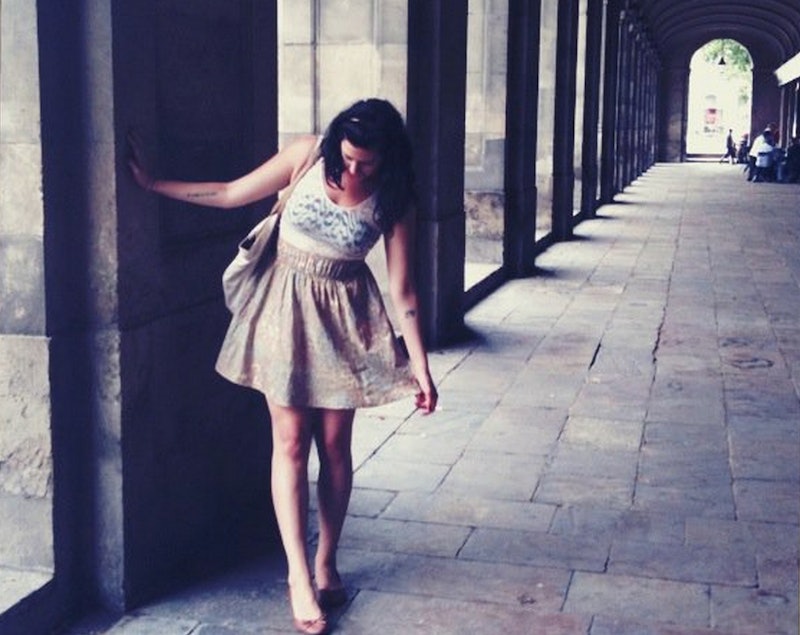 It's been a few days since Kesha tried to break her contract with Dr. Luke, her producer, after claiming that he drugged and raped her a decade ago. The Supreme Court Justice Shirley Kornreich judge ruled in favor of Dr. Luke, whose real name is Lukasz Gottwalk, and who maintained his innocence during the trial. This verdict prompted a bunch of celebrities to speak out about the matter, including, most recently, Lena Dunham.

The whole ordeal has me thinking a lot about the ways in which women support and advocate for one another. When Taylor Swift generously donated $250,000 to Kesha (but failed to tweet her support as did several other celebs), Demi said what I often find myself thinking: “At least I speak up about sh*t that’s uncomfortable to talk about rather than trying to be politically correct 24/7.”

Even though Lovato has since backtracked and said she wanted to keep the convo about Kesha's alleged assailant and her lawsuit — not about rivalry or her views on female empowerment — I don't know if Lovato needed to apologize. She was a tad abrasive, but she was onto something.

Sexual harassment and the way we deal with it is personal to me. When I landed one exciting new job, I remember at the time feeling elated and dizzied and self-sufficient. My naivety, however, clearly trumped my self-preservation. I suppose the downfall started when I accepted their stupid-low salary offer. Too young to understand the concept of negotiation, I said yes, and signed on the dotted line. And it was that same rookie foolishness that caused me to turn a blind eye to being sexually harassed at work.

I noticed John*, the head of another department, staring when I walked down the corridor; sometimes, he’d eye me up and down and smirk. Other times, he’d walk towards me, right in my path, and watch as I fumbled awkwardly out of his way. That bastard cupped the small of my back at a holiday party, running his sweaty fingers along my spine until I moved. Then he did it again. When he stared right down my shirt during a meeting, I’d had enough. We were both department heads, but he made me feel like a child.

“Did you see him staring at me?” I asked my co-worker, enraged. She responded with – get this ­ – a chuckle, as if he were just another dude and he couldn’t help it. As if I wasn't in on the joke yet.

“Yeah, he does that to everyone,” she said. When I told her I wanted to report it and asked if she’d be a witness (because we all know women need to prove their claims or else they're liars), she said, “Honestly, I can’t really start an issue with HR.” She reminded me that she was vying for a raise.

But that guy happened to be friends with my boss and several other bigwigs at the company. That guy was bringing in at least enough money to justify him keeping his job. How would I, a fairly new employee, ever get anyone to hear me out? Especially in a male-dominated workplace. I imagine Kesha wondered the same thing.

Lovato was right about this: there’s support, and then there’s support. Swift’s donation speaks to her incredible sense of generosity and good-naturedness. She’s always seemed supportive and sincere. But what happens when we’re too popular, too comfortable, and too well-liked to step out of line and say, “this is wrong”?

What if my coworker noticed how uncomfortable I was — on the brink of tears, red-faced — and decided to speak up because it was the right thing to do? What if — and this speaks way more to rape culture and the male-dominated workplace than her motivations — she didn’t feel her ethics would prevent her from getting a raise?

While there’s no tangible blame to spread here — not for my co-worker, and not to Swift for choosing money as her method of support — there’s this tiny, nagging, quiet but that swims in my mind. But why not? Why not speak up? Why not say something if you saw something? Or, at the very least, sit down and say to your girlfriend or female coworker, "That wasn’t OK, and I have your back”? The premise of loss is what keeps people silent. I get that. We can’t afford to lose our jobs. And we can’t afford to lose our reputations, especially when women are shamed for speaking up or speaking loudly about almost anything. But what do we gain when we do? I think, a lot.

As chance had it, I ended up reporting it myself after mentioning it to another, older female coworker. She was on her way out, leaving the company, when she came up to me and said, “You need to make a formal complaint. I already talked to HR for you. Now go get it on the books. Don’t ever sit on that.”

According to a 2013 poll by Huffington Post, 70 percent of people keep harassment to themselves. They do sit on it. And, more than half of the people who witness others being sexually harassed keep their mouths shut.

70 percent of people keep harassment to themselves.

So when I finally did report the issue, John’s behavior magically changed. Someone had taken him in a room, closed the door, and said no. Kesha didn’t have that experience, and that’s what’s so jarring. That’s why she needs support — loud and clear and visible — especially from a influential global persona like Swift, who has the power to, say, change the financial model of a giant like Apple by being vocal through email.

Unlike my coworker who felt the need to accept his behavior, Swift doesn’t have anything to lose. She’s got her 71+ million Twitter followers, her Grammy awards, and her payout. Most importantly, she’s got influence. So while shelling out $250,000 was fantastic (and she certainly shouldn’t be punished for this), this sparked a necessary conversation: what is the perceived price of saying NO out loud? What can women do to actively support one another?

Staying quiet hurts everyone. Kesha spoke up, and even though she didn’t win, this is going to cause a ripple effect within the industry in time. And Lovato may have taken away from the focus (it’s about an alleged sexual assault, not Swift), but she illuminated this: women need to be there for women. Not in the "I invite all my friends to be in a music video way," (which is cute yet ineffective) but in a real, tangible, socially accountable way.

Because we’re kind of in this together. In Hollywood, in the workplace, and on the street.