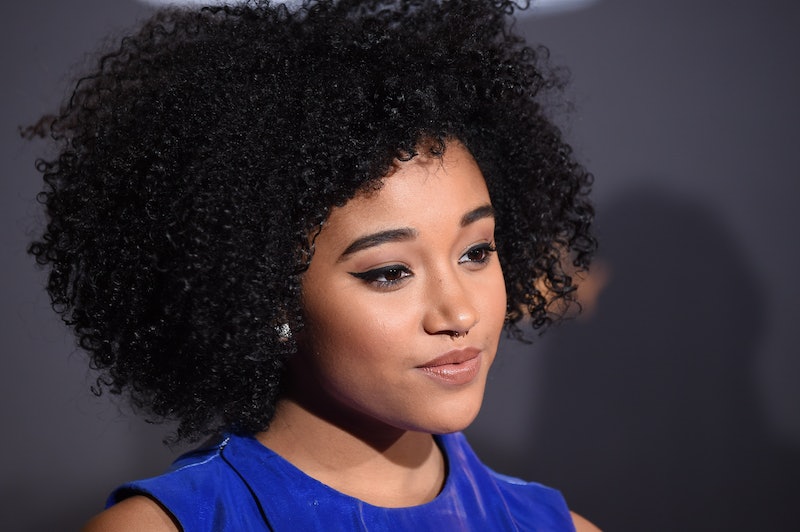 The best news you'll see today if you're a lover of old-school female-helmed young adult sci-fi (which, I mea, everyone should be), is that Ava DuVernay will officially be directing a film version of A Wrinkle In Time. That's right: Madeleine L'Engle's 1962 Newberry Award-winning and beloved classic about a young girl named Meg who becomes a hesitant hero as she travels through time to find her father and defeat evil is becoming a movie, and it'll be directed by one of the best directors of our generation — a female director, no less. Duvernay, L'Engel... sounds pretty perfect. In fact, I think to reach optimum perfection, all this project needs is Amandla Stenberg starring as Meg Murry.

Why? Because Stenberg already IS Meg Murry, and Ava DuVernay is also Meg Murry. I'll get to Stenberg — but first, DuVernay. According to Deadline, DuVernay was chosen by Disney Pictures to take on the project, and it was the perfect choice — the Selma director can fully realize her vision. The writer of the picture is also a powerful Disney woman: Jennifer Lee, who wrote Frozen. As Bustle's Courtney Lindley noted, there's no one better to helm this project than DuVernay, and she's quite similar to Meg herself:

DuVernay isn't confined by what's expected of her, which is why this pairing might be incredibly influential for what's to come regarding women in Hollywood. In fact, it could change the game forever.

At only age 17, Stenberg is also making things possible. After playing Rue in The Hunger Games film at the age of 11, Stenberg has matured and blossomed into one of the voices of her generation, along with her legion of fellow cool and wise-beyond-their years teens. She's been so vocal and eloquent about such nuanced topics, you'd think she was already a tenured professor. In fact, Ms. Magazine eve named her Feminist Of The Year.

Even better: Not only does Stenberg channel Meg Murry's strength and courage on the daily, but she also finds DuVernay to be a personal inspiration. In an interview with Teen Vogue in January in which she came out as bisexual, Stenberg named the director as someone who helps her be courageous in her day to day life:

As someone who identifies as a black, bisexual woman I’ve been through it, and it hurts, and it’s awkward and it’s uncomfortable…but then I realized because of Solange and Ava DuVernay and Willow and all the black girls watching this right now, that there’s absolutely nothing to change.

DuVernay and Stenberg would be a powerful dream team to bring Meg Murry back to life, and to give a whole new generation of young adults a triumphant story full of strange and wonderful science, and so much love.

More like this
This 'Hunger Games' Alum Will Star In A New Medical Drama Titled 'A Mistake'
By Alyssa Lapid
One Powerful Quote In 'Doctor Strange 2' Is Going Viral On Twitter
By Alyssa Lapid
16 Novels That Paint A Realistic Portrait Of Abortion
By K.W. Colyard
Sandra Bullock, Girlboss Extraordinaire
By Matt Harkins & Viviana Olen
Get Even More From Bustle — Sign Up For The Newsletter