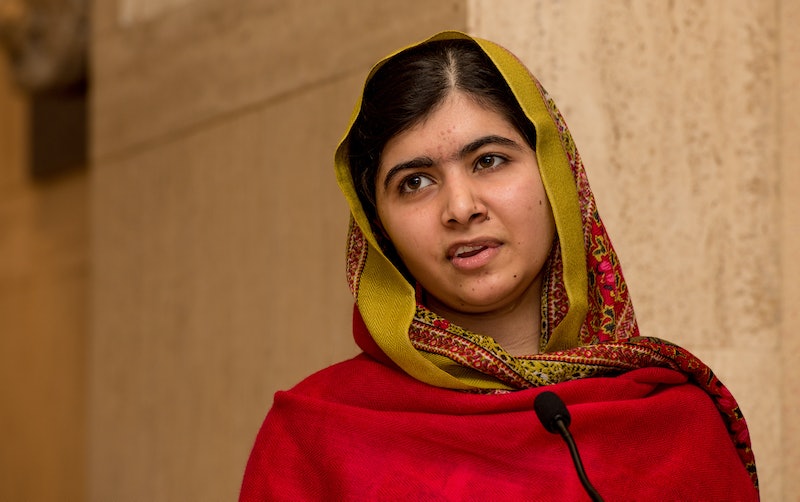 When I first started following feminism online, most of the women whose perspectives I heard were in their 20s and 30s. But over the past few years, I've noticed a shift: I'm seeing more and more notable teenage feminists in the public eye. Whether it's due to celebrities spreading awareness of feminism or an increasing amount of accessible information about the movement online, younger Millennials are showing a grasp of feminism that I didn't have as a teenager.

It's especially heartening to see teens embrace feminism given that the teen years are a time when sexist ideas are strongly ingrained in women and could negatively impact the rest of their lives. Many high schools and middle schools objectify women with sexist dress codes and sex-ed lessons. And by the time they enter college, most women have received warnings not to provoke sexual assault through their drinking habits or manner of dress — victim-blaming starts early in our culture.

Thankfully, many teens are standing up against oppressive norms, and they now have role models among their peers to validate their fight for gender equality. Here are some teen feminists who can teach you some important lessons and give you hope for the future.

Blanchard was only 12 when Girl Meets World , the Disney Channel sitcom she stars in, premiered, and she has been a spokesperson for feminism ever since. At We Day 2015, she explained why we shouldn't be afraid to call ourselves feminists. She has also written about the pressure women feel to apologize for their existence and spoken about the need for women to include and support one another. She understands the more complicated ideas feminism has brought forth, but communicates them in ways the people of all ages can understand. I'm excited for a feminist future that she's a part of.

Best known for her portrayal of the endearing Rue in The Hunger Games, Stenberg has spoken out not only about feminism but also about cultural appropriation and LGBT identity as a black, bisexual woman. Along with Blanchard, she was named Ms. Magazine's feminist of the year in 2015. She understands not just what feminism means but also the other movements it overlaps with and how we can incorporate all identities into feminism.

This California high school student's essay "Why I'm a Teenage Feminist" sums up exactly what teenage feminism is all about. The whole thing is published in The Los Angeles Times 's High School Insider , and it's worth reading every word, but here's a snippet:

I am a feminist because, as a teenage girl, I am constantly told I should watch more news, and get more involved, but the minute I open my mouth and speak, I am told I am just a teenage girl, and do not understand, but I do understand... I am a feminist because when I told the man that I was going to call the police, he seemed offended, and even told me to "calm down" because it was a compliment and I shouldn't be so mad or serious.

The essay also discusses the double standards to which we hold white women and women of color and other important issues. If you can't get enough of her writing, Sambrano writes about feminism and other social justice issues on her blog as well.

After a speech given to the student body of her school on how girls (but not boys) should dress, Cat Just spoke up and was asked to leave the assembly. Afterward, she used Facebook to organize a "crop top movement," in which boys and girls came to school in crop-tops, spaghetti straps, and short shorts. Only the girls were disciplined. Just penned an op-ed in the Bangor Daily News explaining that dress codes are not improving students' education — they're just objectifying women. And she's absolutely right.

Yousafzai's advocacy for girls' education made her the youngest Nobel Peace Prize laureate ever. As a preteen in Pakistan, she blogged about life under the control of the Taliban and often gave TV and radio interviews on this topic, leading to an assassination attempt by the Taliban which she barely survived. Now 18, she continues advocating for girls' education as a worldwide speaker and the founder of the Malala Fund, which sponsors school for girls who wouldn't have been able to attend.

While older feminists' first instinct may be to teach teenagers about feminism, these teens demonstrate that we'd be better off listening to them. As Sambrano so powerfully wrote, they already get it.