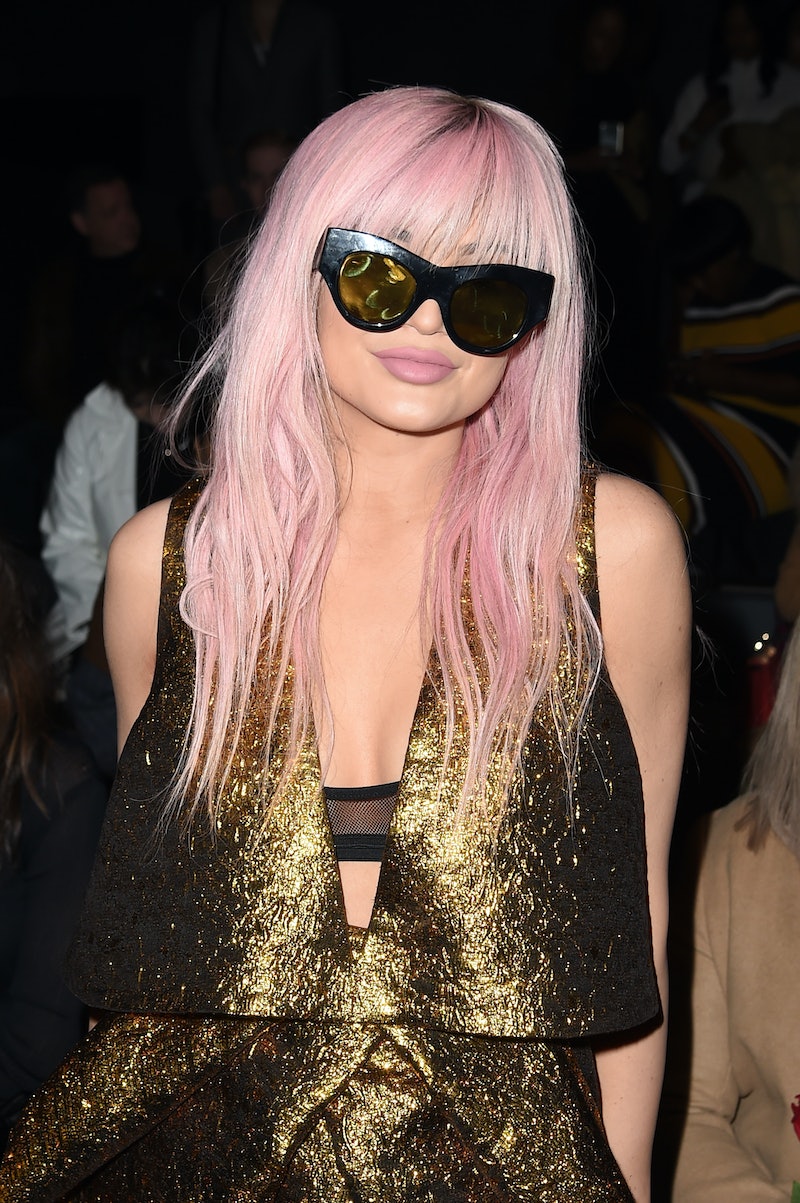 Kylie Jenner's makeup game is so strong. Even the most staunch critic of Jenner and her family can agree that each lady in the Kardashian-Jenner family has beauty game that's practically unrivaled, and everyone seems to want to copy it. There's one body part Kylie Jenner contours, however, that you probably skip (and are totally OK with ignoring): her ears. That's right, Kylie Jenner contours her ears. Many already lob criticism at the youngest Jenner about the amount of makeup she wears, so this is sure to get people's hair spinning, but before people judge, they should hear Jenner's reason for the technique.

Jenner may now seem to be the queen of makeup, but she was definitely preceded by eldest sister Kim. The OG of Kardashian fame basically put contouring on the map when she burst onto the beauty scene. Now, Kylie seems to have not only taken on that mantle but ran with it. Not only is her ever-changing hair color the talk of the hair scene, but her foray into the cosmetics world has been an uber-success. The Kylie Lip Kit sold out in mere minutes, and even based on the internet buzz alone, her new shades are equally as popular. Basically, she's taken over the beauty world, so it's not a surprise that her latest makeup tutorial on her site is blowing up the internet. While the look is gorgeous, the fact that Kylie Jenner contours her ears is what caught everyone's attention.

In the video, Kylie is getting her makeup done by her staple artist, Hrush Achemyan. Hrush is clearly a pro as she flawless blends Jenner's look into perfection. (Oh, and fun story: Kylie Jenner found Hrush on Instagram.) In the video, while Hrush begins to contour Jenner's nose, the youngest Jenner says, "I like when you contour my ears." Not exactly what you'd expect to hear, right? While you may be thinking, "WTF, why is she contouring her ears?" you should hear out Jenner and her ultra-talented makeup artists.

The pair explains that while many consider the neck to be part of the face, many forget the ear. Hrush explains, "Actually it's a really big tip a lot of people don't do. It's not cute when you're on the red carpet or you get snapped and your face is one color and your ears are different. It shows like the tone is not really your skin tone and you have on a lot of foundation. Just like your neck, your ears are a part of your face." Too true, right? It definitely makes sense that it's a key component of Kylie's makeup. After all, she is the queen of blending.

That's the thing about Kylie's makeup game. One look at her tutorials on her app, and you know that she's got a lot going on in terms of her face. However, seeing her on the red carpet, you'd think she was blessed with flawless, even skin. Instead, the typically matte look is the result of blending until fingers bleed and making sure that everything — neck, chest, and ears — flow seamlessly into one another.

It's easy to get swept up into dramatic eyes, on fleek brows, and tons of highlight, but Jenner's real talent is understanding that the basics are really what make a flawless face.