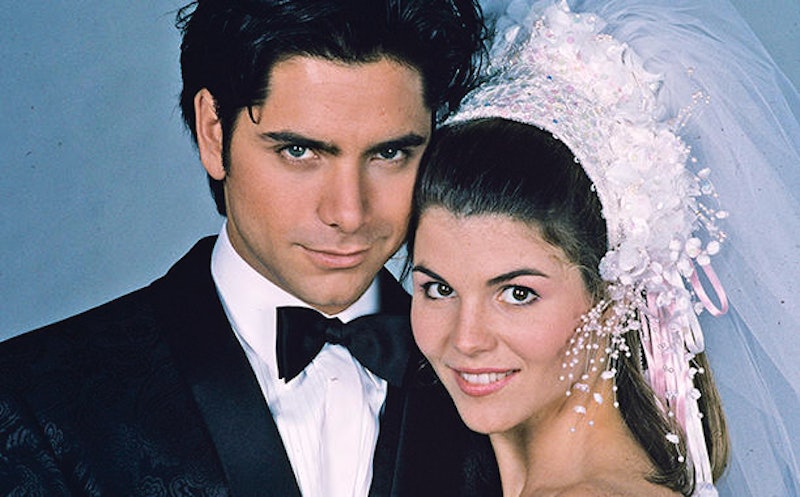 There's absolutely no denying that Full House delivered many memorable musical moments throughout its eight season run. From Elvis tributes to Beach Boys cameos, this gang jumped at every opportunity to burst out into song and dance. Not to mention that Uncle Jesse was the lead singer of Jesse and the Rippers, so rehearsals and performances were commonplace under the Tanner roof. However, if you had to narrow it down to one music scene that stood out among the rest, it would have to be the Full House "Forever" song that Jesse sang to Becky on their wedding day. And now that the Netflix revival series, Fuller House, is making its debut, there might be some fans out there curious to know how to listen to the "Forever" Full House song for nostalgia's sake.

Plus, it's not like listening to this romantic melody ever gets old. Heck, I wouldn't be surprised if Uncle Jesse performed a rendition of the song at some point on Fuller House. (After all, classics never go out of style.) So just in case you feel like taking a walk down memory lane — or need another excuse to swoon over John Stamos' sexy vocals — here are the best ways you can go about hearing this now iconic and catchy tune.

To Own The Original, Head To iTunes

If you're like me, then you don't just want to occasionally hear this song — you want it with you, to be played at any time 24/7. But in order to do that, you need to buy the song outright on iTunes. There's a catch, though — John Stamos' version isn't available to purchase, however, the original song (sang by the Beach Boys) is for $1.29. So if you just want to hear the song, regardless of who's singing, this is your best bet.

To Own Stamos' Rendition, Head To Amazon

Apart from singing it on the show, the actor also covered lead vocals for the song in the Beach Boys 1992 album Summer in Paradise , which can be purchased on Amazon. So if it's Stamos' voice you're after, this CD is one of your best options. The only thing is that you'd have to buy the entire Beach Boys CD rather than just that one specific song. But this is the Beach Boys we're talking about, so can we really call that a downside?

Not only will you see Jesse in all his sexy glory, but the moments between him and his newborn sons, Nicky and Alex, will take your squealing game to a whole new level. Seriously, get ready for cuteness overload, my friends.

Then again, nothing can beat watching Jesse sing these beautiful lyrics directly to Becky during their wedding ceremony. Forget everything you thought you knew about romance because this right here is the epitome of true love. Even now, after all this time, it never fails to give me chills.

To See The Reunion Edition On Fallon, Remain On YouTube

Back in 2013 — long before the idea of a revival had ever crossed our minds — Jesse and the Rippers reunited on The Tonight Show Starring Jimmy Fallon to perform a mix of their greatest hits, from "Forever" to the Full House theme song. You'll laugh. You'll cry. You'll feel like you've been transported back into the '90s.