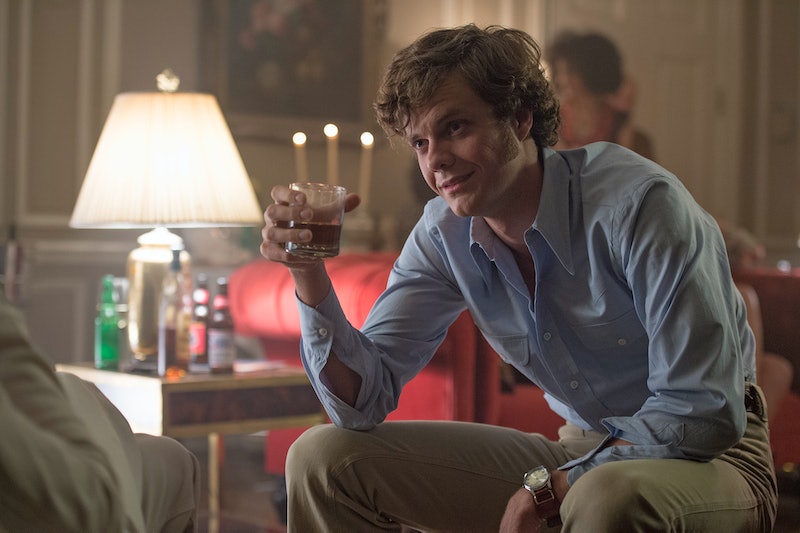 Even if you're one of the few people who hasn't watched HBO's Vinyl yet, surely you've at least seen the poster. It boasts an aviator-clad Bobby Cannavale leering at a troupe of sleeveless rockers and sums up what the HBO Series is about: the coolest industry, in the coolest period of American history. Any series that centers on the era that ushered in plunging necklines, platform shoes, and some of the greatest music of all time is going to be revered, and when you factor in the likes of Martin Scorsese and Mick Jagger, the awe factor is undeniable. So, what happens when you're a character from Vinyl who is decidedly not

“Clark is the least cool person in the office by far,” actor Jack Quaid says of his character. Indeed, the junior A&R representative lacks the bravado of Cannavale's Richie, the appeal of Kip Stevens (James Jagger), or even the tenacity of Jamie Vine (Juno Temple). But Quaid explains that playing someone so unhip has its own benefits. “I think it’s really fun … to navigate a guy who’s kind of a square through the world of sex, drugs, and rock ’n’ roll.”

Vinyl shows the allure of the '70s with ostentatious costuming and nonstop party scenes, akin to other cinematic depictions of the decade. A less glamorous part of this world, Clark is reminiscent of boy reporter William Miller from Almost Famous, but by Quaid's admission, Clark is more of a "weasel," which would relate him more accurately to Mad Men's Pete Campbell. Like those characters, Quaid says that Clark is "just kind of a dork who is not cool enough to be at a historically cool job."

However, Clark is not standing on the sidelines, he's a cog in the record industry machine, and his role in Vinyl will grow as the season progresses. "Clark has a lot of growing up to do," Quaid says. "He's involved in a very cutthroat business, and he experiences the highs and lows of that throughout the first season."

Though other cast members may have been able to draw inspiration for their characters from real players in the music industry, Quaid found a different source for his role. "Clark is largely who I would be if I had that job, so it wasn't too much of a stretch," he says. The actor, who also produces and stars in videos for sketch group Sasquatch Comedy, also uses his own comedic talents to bring levity to Vinyl when needed. "Any good story has a good mix of light and dark, and Clark has both of those," he says. "I like playing people who have multiple sides to them, so for the comedic parts it was nice to have some experience in that realm."

Though Vinyl, which airs Sunday nights at 9 p.m., isn't Quaid's first notable role (he previously appeared in The Hunger Games), he says that starring in the HBO series was "nerve-wracking, because the show was just so huge and amazing and I had to really step up my game, and hopefully I did." Anyone who's seen his portrayal of Clark so far can attest that he certainly did.