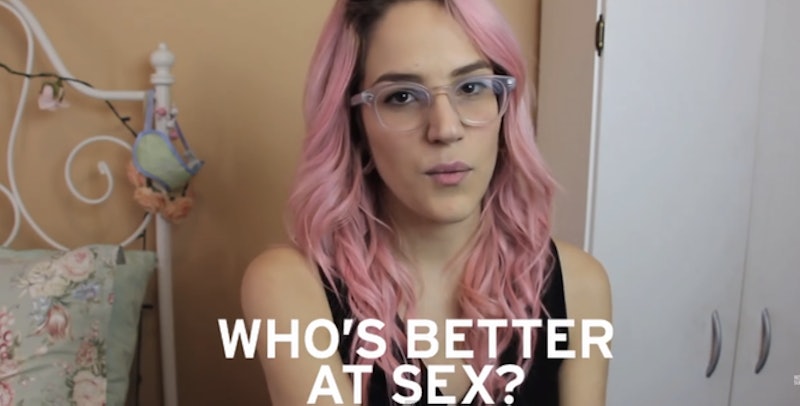 Are men or women better in bed? I don't think there's a definite answer, but as a bisexual, people ask me it all the time. And Arielle Scarcella has put together a really informative video asking bisexuals the difference between sex with men versus sex with women — and there are a whole lot of differences. Trust me.

I think it's fascinating. Because it's a question I've been asked a lot and while I'm tempted to say "it's like apples and oranges", that's a massive oversimplification. I would say that they can feel like very separate things, but there's obviously loads of overlap between them. For me at least, sex has always varied more on the person I'm doing it with then the gender of the person, although in a general way I find lesbian sex is usually more intimate. But in reality, I've had very personal, romantic sex, I've had rough and experimental sex and everything in between— and it's always been more about my dynamic with that person, rather than the gender of the person I'm having it with.

So it's really interesting to hear other bisexuals explain their own experiences. But also, even if you're not bisexual and just curious about how the compare, it's definitely worth watching.

You can find the whole video here:

Here were my favorite parts:

How Do You Idenitfy?

The first question was how you identify, whether it was queer, pansexual, bi, but all of the participants were interested in men and women.

...And Don't Assume You Know

Although she emphasized the annoyance of having people assuming they know how you identify just based off of how you look— saying people have just assumed she's a lesbian. You can't tell, people, so don't jump to conclusions.

Who Have You Been With?

It's a nice reminder that to be bisexual you don't have to have been with equal men versus women. In fact, you don't need to have been with both genders at all. You know who you're attracted to, and haven't acted on that doesn't change anything. Or, like this woman, you may have had romantic relationships with men and sexual relationships with women, or vice versa. It doesn't matter. We love you anyway.

Who Sounds Sexier In Bed?

"Women hands down," according to her.

She explained that "Guys make this deep throaty 'UGHHGHHGHEHGHGH'." Most of them made a sort of dying pig sound when trying to imitate male sexual noises.

Choose Your Own Adventure

She likes that "you can pick the perfect size when you're playing with toys with a woman," although another woman complained about all of the equipment involved in lesbian sex. Although it's only some lesbians that use equipment, to be fair.

Do You Approach Men And Women Differently?

She explained that "guys are kind of intimated by woman who are really overt and confident." She said that this meant her take more of a backseat while dating guys. I think that's totally true, although I've never so much taken a back seat as had to find the guys that are OK with it. But I've found generally men are also really intimated by women who have sex with women. She also added the she approached women a bit more like:

"RAAAAWRRR" — not an exact quote, but I love the photo.

She says that when she likes anyone, guy or girl, she will "ignore the fuck out of them." This woman is all of us.

The big question She gave a very definite answer: "for oral, women," but also said it varies based off of the person.

While she said that both genders are "very good in very different ways," she explained how with women, it's more about topping for her and less about her pleasure. So there does seem to be definite gender difference in her case, so everyone's different. But she also added— with a lot of enthusiasm that "girls know how to finger f*ck way better." WAY better. So there it is.

More like this
7 Women Share Their Best Orgasm Stories
By Lexi Inks
The Best Time To Date After A Breakup, According To Experts
By Bustle Editors
Expert Tips For Being On Top When You're Plus-Size
By Lexi Inks
How Do I Deal With Both ED & Premature Ejaculation?
By Sophia Benoit
Get Even More From Bustle — Sign Up For The Newsletter