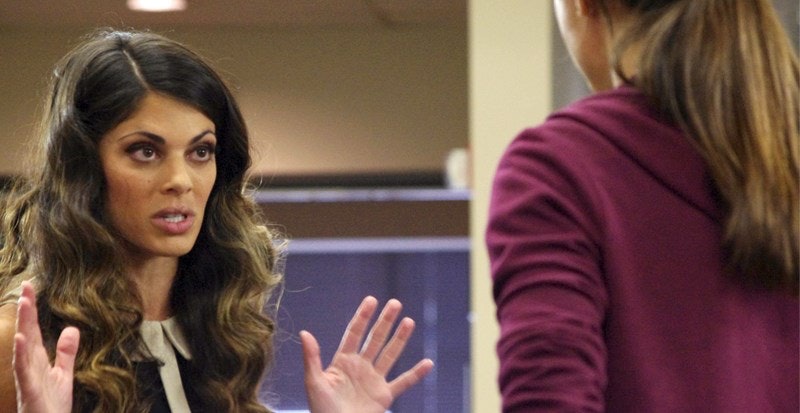 While many of Lifetime's original movies consist of true stories turned thrillers, this week's Nightmare Nurse seems like it may be taking a different direction. Though some of the network's titles are focused on dramatic, but possible, scenarios that have happened before and could possibly happen again, Nightmare Nurse seems to be just on the other side of the "Wait, did that really happen? Is that a real thing?" divide that separates its movies. It may seem outlandish, but is Nightmare Nurse based on a true story?

Unlike many of Lifetime's best known original movies, Nightmare Nurse is a total work of fiction, and not at all based on a true story. So fear not, those whose partners are going through physical therapy — there is currently no real life precedent for an attractive nurse visiting a house under the guise of medicine and destroying the relationships of the inhabitants. Here's how MarVista Entertainment describes the plot:

After Brooke and her boyfriend Lance have a car accident, Lance’s leg injury requires him to be bedridden with at-home care. When an attractive nurse, Chloe, is recommended to them, she seems perfect for the task. However, when her troubled past comes to light, it becomes apparent to the happy couple that someone is out to destroy their lives.

A troubled past? A happy couple with someone trying to destroy their lives? Someone who seems perfect but has ulterior motives? If those aren't the perfect ingredients for a Lifetime movie, then nothing is. The trailer really ramps up drama as well.

Brooke and Lance may be plagued by the appearance of a Nightmare Nurse, but they're far from the first fictional characters who have encountered a nefarious nurse. Chloe's malicious tendencies add another entry into a long line of evil nurses in film and television. If you want to meet more fictional nurses like Chloe, here are the films to watch.

Nurse Ratched, One Flew Over The Cuckoo's Nest

Nurse Ratched isn't just an evil Nurse, she's the evil nurse. Louise Fletcher won an Academy Award for her portrayal of the bureaucratic Nurse Ratched, who works to keep the patients of a psychiatric hospital in line. In 2003, AFI declared that Nurse Ratched was the fifth-best movie villain of all time. Nurses don't get more nightmarish than this.

Charlotte Diesel, played by Cloris Leachman, was played for laughs in the Mel Brooks comedy High Anxiety, and is appropriately the most cartoonishly evil nurse ever. Diesel has a penchant for sadism and witchcraft that makes her a living, breathing nightmare — she just happens to also be an entertaining one.

Annie Wilkes trained as a nurse, but she's never seen in a hospital over the course of Misery. Instead, she creates a make-shift hospital bed for her favorite author when she finds him after a car crash. However, Annie's kindness turns out to just be a kind mask covering a violent fanatic who wants the author to resurrect her favorite character from the dead and is willing to harm him to get what she wants. Kathy Bates delivers an amazing performance and won an Academy Award for the unforgettable role.

While it's not clear yet whether Chloe's status as a Nightmare Nurse can compare to some of the great evil nurses of film history, she's certainly going to do a lot of damage to an otherwise happy marriage, and on the path of evi,l that's as good a start as any. Chloe's reign of terror begins (and possibly ends) on Lifetime this Saturday at 8 p.m.

More like this
A 'Bridgerton' Star Just Dropped A Major Hint About Joining The Live-Action Barbie Cast
By Bustle UK
'Doctor Who’s New Star Is Already Huge On TikTok
By Maxine Harrison
What’s New On Netflix: A Victoria Justice Rom-Com & The Return Of David Letterman
By Arya Roshanian
How Ncuti Gatwa's 'Doctor Who' Casting Impacts His 'Sex Education' Future
By Nola Ojomu
Get Even More From Bustle — Sign Up For The Newsletter