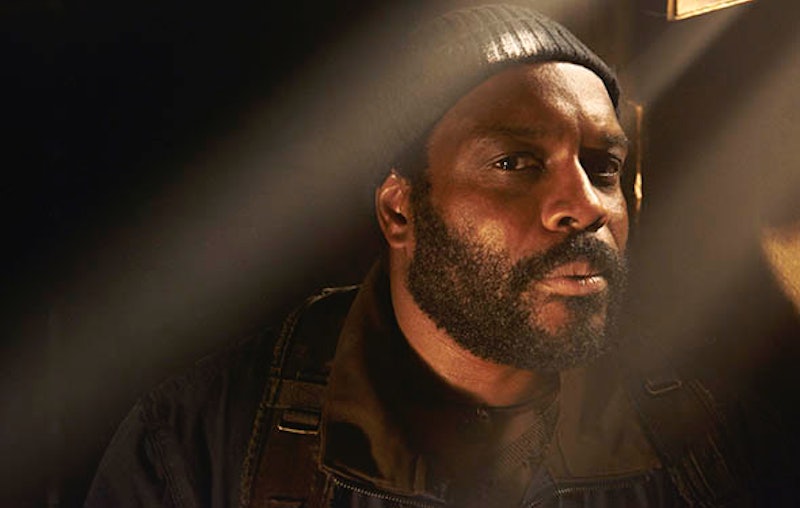 Well, Walking Dead fans, the shocking midseason opener for the show's fifth season has come and gone, and with it the life of fan favorite Tyreese Williams. Yes, Tyreese really died on The Walking Dead . While the episode, “What Happened and What’s Going On,” was tragically gorgeous from start to finish (all those trippy visuals and eerie audio? Come on! Amazing), Tyreese's untimely death was definitely one of the sadder ones that loyal fans of TWD have seen go down.

From the moment Tyreese entered the zombie series, it was clear he wasn't your average tough guy. The big, hulking hero — played perfectly by Chad L. Coleman — added depth to his muscle, showing a softer side that was always welcome in the sometimes (usually) dire landscape of the show's zombie apocalypse. Whether he was facing down The Governor or his dedication to doing what he deemed morally right, Tyreese was always an important presence on the series. His death is definitely going to leave a sizable hole in The Walking Dead's cast of characters.

Now that he's officially gone (insert 1,000 crying face emojis here), I think the least we can do is take a look at some of Tyreese's top moments on TWD. From changing dirty diapers to showing a truly epic amount of forgiveness towards Carol, he'll be truly missed.

Few things make surviving a zombie plague harder than carrying around an infant who might cry at any minute. Tyreese, big, manly Tyreese, took it all in stride, becoming baby Judith's fiercest protector/nanny. Once T-Dog died (still not over that one), the show needed a new testosterone-fueled dude to take his place, and while Tyreese was definitely a force to be reckoned with, his gentle way of taking care of Judith made for some of the most genuine, heartfelt scenes throughout the show.

2. Forgiving Carol for Lighting His Girlfriend on Fire (Ouch)

It goes without saying that according to Friendship 101, you probably shouldn't light your friend's girlfriend on fire. If said girlfriend is infected with a terrifying disease that could possibly kill everyone, eh. That's kind of a gray area, I guess. Thankfully, when perpetual badass Carol made the ultimate decision to off Tyreese's girlfriend, Karen, he eventually accepted her apology and they were able to move on as friends. Saint Tyreese for the win, everybody.

3. When He Made This Joke In a Terrifying Situation

Think back allllll the way to Season 3's episode "The Suicide King," when Tyreese was first encountering the jail they'd all eventually come to call home for a little while. Despite the pretty bleak situation, Tyreese was all, "I must be the first brother in history to break into prison," which made everyone smirk and giggle and for one brief second forget there were flesh-eating zombies roaming around. PRAISE YOU, TYREESE.