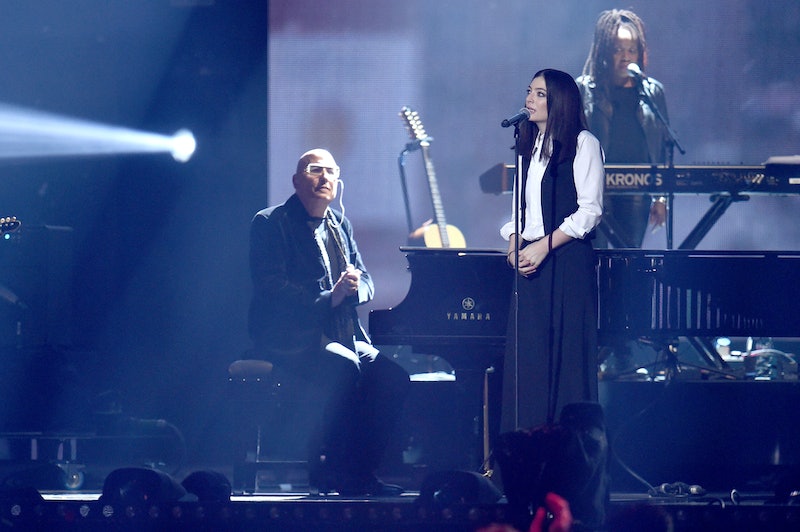 Somehow, no matter how much time passes, the tributes that have followed David Bowie’s tragic death at the age of 69 from cancer never get easier to watch. Though great, they're bittersweet to watch — especially as a diehard fan. Still, when Lorde performed a stunning rendition of David Bowie’s “Life on Mars” at the 2016 Brit Awards, it was an emotional tribute to the innovative and incredible star. The performance followed Bowie being awarded a posthumous award for his life’s work. Introduced by Annie Lenox — another legend in her own right — the entire segment was devoted to Bowie, and Lorde’s performance made for an incredibly emotional moment in the evening’s ceremony.

Maybe it’s because Lorde has spoken at length about Bowie’s influence on her career that made her performance so emotional. After all, it comes in the wake of her post on Facebook in January 2016 detailing her feelings about the death of the man she called “a hero of mine.” Speaking poetically of the role he played in so many people’s lives, Lorde said, “He was a piece of bright pleated silk we could stretch out or fold up small inside ourselves when we needed to.”

Considering how eloquently the "Royals" singer spoke about Bowie's influence on her life, it was even more emotional watching her tribute to him. Lorde took to the stage during the award ceremony on Wednesday night backed by Bowie’s former tour band. The tour band last performed together on the A Reality Tour in 2004, but they came together on Wednesday night to perform a medley of Bowie songs in honor of the late musician — but it was definitely Lorde’s performance that capped the whole thing off.

Bathed in red lights with a simple collared shirt and black vest on, there were no huge theatrics, no choreographed elements to her performance. It was stripped down and raw in a way that seemed to both celebrate Bowie’s music and make the statement that he always did it best. There’s no use copying his moves or his hairstyles. He was an artist all his own, and Lorde’s tribute seemed to be saying just that.

It was a touching performance, one bookended by stirring speeches celebrating the late artist, and it was also one that was definitely what Bowie deserved. Considering Bowie had tapped Lorde as “the future” when they met in 2014, I’m sure he would have been beyond proud of her performance and the way she honored him on Wednesday night.

You can watch Lorde's performance here.