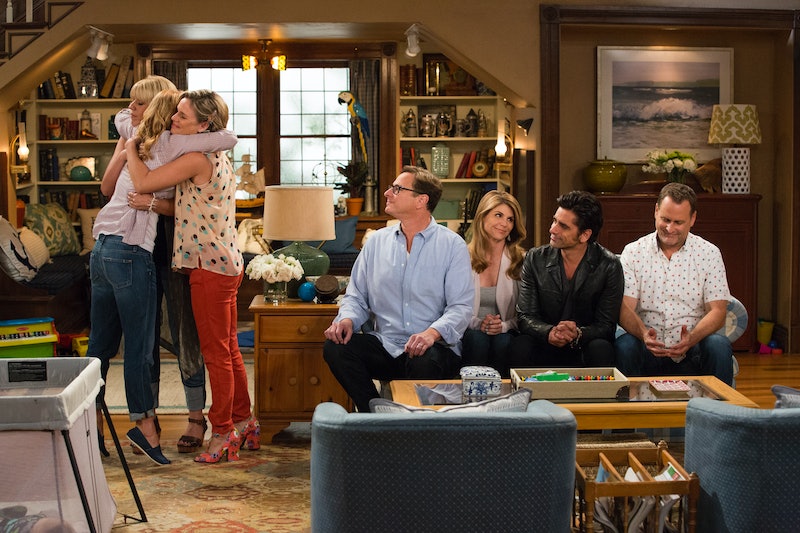 Full House became a cultural touchstone as part of a spate of family-oriented comedies that took over network TV with their bright-eyed optimism and formulaic problem/resolution structure. The Tanner brood have hung on to their rung in pop culture so tightly that the revival series Fuller House is coming to Netflix on Feb. 26. The catchphrases ("Have mercy!" "You got it, dude!") and characters linger, but no small part of Full House's lasting appeal is that the show is about the family you're born with and the family you make for yourself. The cast became that adoptive family over the years; the revival was quickly mounted because the main ensemble have stayed such good friends, attending each other's weddings and meeting up for holidays. The men of the series in particular grew close when tragedy coincidentally struck at the same time in all of their lives. The first episode of Fuller House is dedicated to Arlen Coulier, Carole Franklin, Dolly Saget, and Loretta Stamos, four mothers who passed during the original run.

Catch up on the original series: Full House: The Complete Series Collection, $109.99, Amazon

Arlen, Dolly, and Loretta are the mothers of Dave Coulier (Joey), Bob Saget (Danny), and John Stamos (Jesse), respectively. Carole is the mother of the show's creator, Jeff Franklin. The four colleagues lost their mothers within the same year, according to Zap2It. The comfort and strength that they offered one another during that time solidified a lifelong bond. Dave told People, "There was just an instant support system. I consider those guys my family. We're just always there for each other. We really made some extraordinary friendships that will last forever."

Life strangely imitates art in this case. It's the death of Danny's wife — D.J., Stephanie, and Michelle's mom — that brings together Full House 's blended household in the first place. Coping with loss and resetting after a major life derailment are themes that just about anyone can identify with. Just like their TV counterparts, the show's cast and crew marked personal milestones together. "It's been beautiful because we've all had ups and downs. We've had divorces and deaths, and we've all been there for each other like a real family," John said in the interview with People.

The dedication to Arlen Coulier, Carole Franklin, Dolly Saget and Loretta Stamos will appear in a frame at the end of the first episode, dedicating the show to them "in loving memory." The sincere tribute isn't the only way their sons remember them. Dave told Broadway World about the group text he and the other actors, whom Dave calls his "real brothers," started about the in memoriam. "It's so convoluted the way our texts go," Dave said. "Stupid jokes get woven in as well as dirty humor and off color remarks. It would be impossible to decipher the code if [anyone] read it."

According to Jeff, the crew's beloved mothers wouldn't mind being the subject of a little comedy. The showrunner told People that attaching their names to the new Netflix sitcom is fitting, "because this is something they would have loved." And, now, thanks to the memoriam, their memories can live on forever in Fuller House's pilot episode.