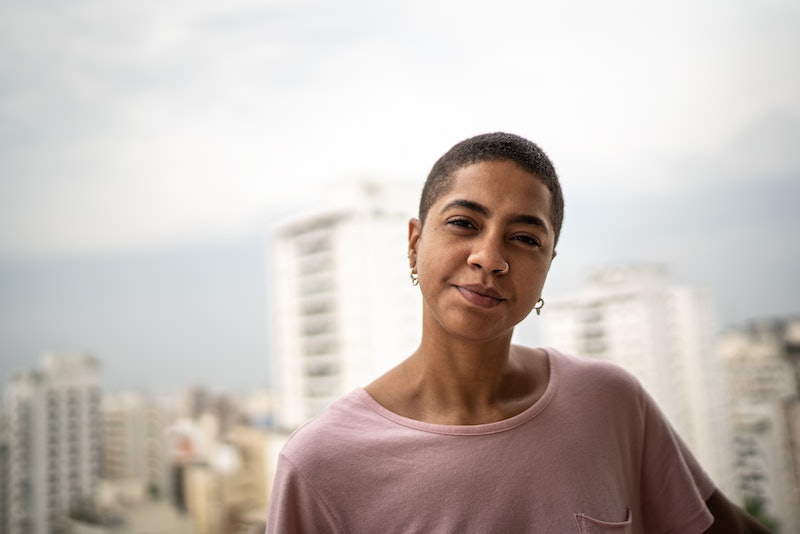 It's one of (the many) long-held misconceptions about bisexuality that you aren't "really bi" unless you have been with an split between men and women. People also think that if you identify as gay or straight then that means that you would never, ever hook up with the other gender. And for some people, I'm sure that's the case, but for a lot of people, identity, labeling, and orientation are a whole lot more complicated than that.

Bisexual people, and others, have been saying for years that sexual orientation can be different from practice, but it looks like some research is starting to catch up. A study in The Journal of Adolescent Health looked at around 3,000 adolescent girls and found that about one in five girls who identified as lesbian and four in five girls had a recent male sex partner.

This is absolutely no surprise to me— especially looking at teenagers, where sexuality is still being discovered or, even if you know you're into girls, there may not be as many potential female partners around. That was certainly the case when I was in high school. The author of the study, Michele Ybarra, said the "findings highlight that sexual orientation labels and sexual behavior don't always align — especially during the teen years". But again, you can be bisexual and never had sex with one gender — or have had sex at all. Just like you can be straight and be a virgin. This probably isn't really news to any of us.

The study looked at other aspects of sexual behavior and health and had some interesting finds:

1. Bisexual & Straight Girls Started Having Sex At Around The Same Age

This fits right on track for me. While most straight girls started having sex at 15.5 years old, most bi girls were only a bit younger at 15.1— so not a very significant difference.

2. But Lesbians Started Much Younger

With lesbians, however, the difference was much more pronounced. The average lesbian girl started having sex at 13.8, so over a year before bisexuals and over a year and half before straight girls. That's a long time— especially when you're in that age range.

3. Lesbians Were Much Less Likely To Discuss Contraceptives

This is where the authors became worried — 32 percent of lesbians discussed contraceptives compared to 62 percent of bisexuals and 73 percent of straight girls. The worry is that if lesbians are also having sex with men, will they be less likely to use contraceptive with them as well? Ybarra says "this means that lesbian and bisexual girls may be having unprotected sex with boys — and with girls" and co-author Elizabeth Saewyc said:

Programs need to teach all youth about safe sexual practices for the kinds of sex they're having, and that means teaching pregnancy prevention and condom negotiation skills to lesbian and bisexual girls too.

It's a solid point. Everyone should be a aware of all safe sexual practices they might possibly need to use, because experimentation is great and natural and you never know what you'll be interested in down the line. And knowing how to practice safe sex is a crucial skill.

Want more of Bustle's Sex and Relationships coverage? Check out our new podcast, I Want It That Way, which delves into the difficult and downright dirty parts of a relationship, and find more on our Soundcloud page: