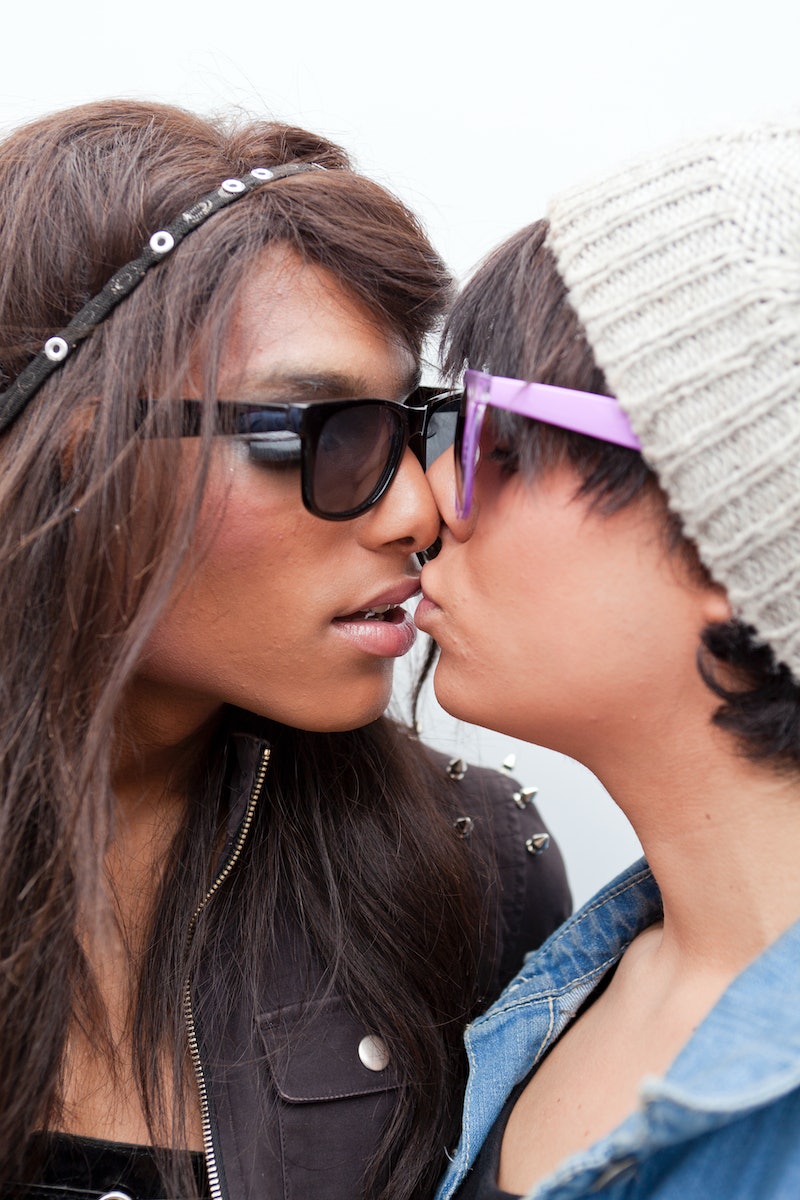 A few days ago, news outlets everywhere began covering the news of an adorable lesbian couple who took turns getting pregnant and had babies one year within one another. Melanie and Vanessa Iris Roy from Charlotte, NC decided to take photos at each stage of each of their pregnancies for their personal Instagram, but after they had their son Jax and their daughter Ero, the photos went unexpectedly viral and were met with a ton of support and excitement surrounding the messages related to family and body positivity. It did, however, also bring up some interesting points about how those who don't identify as lesbians percieve those who do — as is the case with most misconceptions, untrue myths about lesbians tend to be pretty persistent.

Take this, for example: When I was looking through these photos with one of my friends, she made the comment that she was surprised that Melanie, the slightly more masculine/androgynous presenting of the two, would have a baby. When I asked her why, she shrugged and just said, "I don't know. Wouldn't the more feminine one want to carry a child?"

This is one super common misconception about lesbians. People usually apply a very heteronormative gaze to a female couple and assume that since, in straight relationships, the woman has the children, in lesbian ones, the most feminine one of the couple has them. But this isn't the case, because gender identity and sexuality don't inherently have anything to do with wanting to carry a child. Just because a person who is able to carry a baby doesn't want to appear or identify in an overtly female or feminine way, that doesn't mean they can't or shouldn't be able to start a family.

But this isn't the only myth associated with lesbians, as you can imagine. Check out nine more that ladies who fancy ladies have to hear all the time, but want you to know aren't necessarily true:

1. All lesbians know all other lesbians.

I mean, I wish. But chances are that I don't happen to know your second cousin who lives all the way over in Florida and happens to be a lesbian. In fact, I'll probably never know her. Heck, I don't even know most of the lesbians who live in my own city.

2. All lesbians hate all men.

Just because women are perfect and boobs are awesome and girls have soft lips and more interesting minds and twinking laughs and better style and amazing hair doesn't mean... wait, what was I saying? Oh, right. No, all lesbians do not hate all men. We just don't particularly want to sleep with them.

Some lesbians, like some people in general do tick all of the above boxes; however, others do not. Take me, for example: Cats have too much attitude for me to deal with, steak dinners are my favorite dinners, and I work for a corporation and am happy with my job. Just by existing I can disprove this myth.

4. All lesbians are either butch or femme.

NO NO NO NO NO. Like I mentioned earlier, this is a very heteronormative understanding of gender and sexuality, and not all lesbians have to identify as aggressively feminine or agressively masculine. They can be variations of the two, combinations of the two, in the center of the two, or none of the two and something completely different entirely. Also, sidenote for straight people: y'all aren't usually expected to define your gender identity or presentation, so please stop expecting us to do it.

5. When two lesbians date, there's a "man" in the relationship. You know, someone who pays the bills and opens the doors.

A lot of these myths keep coming back to the same idea, so let me just say one last time: In a girl on girl relationship, there are no not-girls. The expectations placed on men to be chivalrous and in-charge need not apply to lesbian couples — and in my opinion, they shouldn't apply to any type of romantic relationship, no matter what orientation it is. Harmful gendered cultural expectations suck. Period.

This one is important, because it has to do with the right of self-identification. A woman can identify as a lesbian and be primarily into women, but just because she A) sometimes sleeps with or dates men or people who identify with a different gender, B) has done so in the past, or C) has done both A and B, that doesn't mean she has to identify as bisexual, pansexual, etc. Lesbians can be fluid in their sexuality just like straight people can, and yet still identify in a specific way that feels right to them. Just because a straight girl kisses another girl and enjoys it doesn't mean she's suddenly a lesbian or bisexual if she doesn't have interest in pursing that part of her identity.

7. All lesbians have a great gaydar.

Unfortunately, this isn't true. There used to be a time where it was so much more simple, where anyone with Doc Martens and a flannel shirt was instantly, obviously gay. But times have changed and the straight woman has taken our Docs, our alternative lifestyle haircuts, and our plaid, so telling who's who is much harder.

I'm being facetious, of course; Docs are for everyone, right? But to answer your question, no, we don't all have some built-in sort of beacon that allows us to identify each other on sight.

8. Lesbians are more emotional than they are sexual and therefore cuddle more than they have sex.

9. Lesbians relationships are just all rainbows and butterflies.

More like this
The 19 Best Tweets & Memes About Bisexual Awareness Week
By Lexi Inks
An Honest Review of MeUndies Boxers, According To A Non-Binary Person
By Megan Lasher
Pro Footballer Zander Murray Is "Blown Away" By Support After Coming Out
By Sam Ramsden
How To Politely Reject Someone Who Keeps Asking You Out
By Laken Howard and Lexi Inks
Get Even More From Bustle — Sign Up For The Newsletter