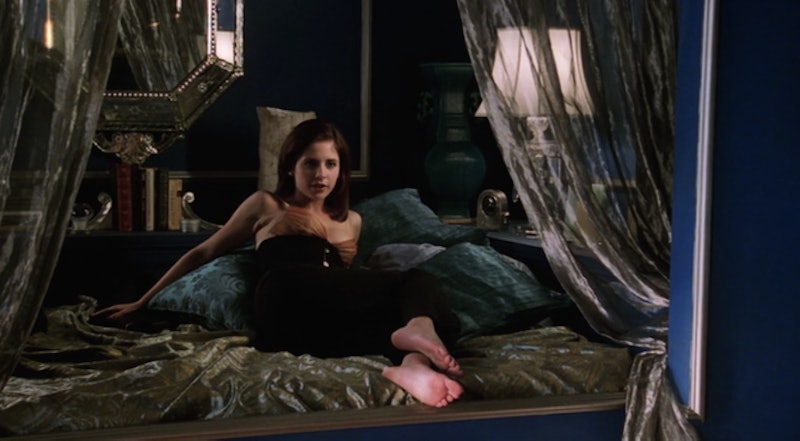 Last night, as I was stalking Sarah Michelle Gellar's Instagram — as one does, of course — I came upon a particularly early and intriguing #TBT post from the former Buffy actress. As it would turn out, the post was actually Gellar announcing she's joining the upcoming Cruel Intentions pilot to reprise her role as Kathryn Merteuil from the 1999 film. The caption stated: "That's right 'everybody loves me, and I intend to keep it that way' #kathrynmerteuil is back!!!" Now kids, Kathryn is the most important teen movie villainess of the '90s, and I'm always thrilled to welcome Buffy Summer, vampire slayer, back to television. But, I do wonder... what does Gellar's return mean for the Cruel Intentions show?

Well, we know thus far, thanks tor reports, that the show will be centered on the next generation of Manchester Prep kids — particularly Sebastian (Ryan Phillippe) and Annette's (Reese Witherspoon) child Bash Casey (Taylor John Smith). Bash comes into contact with Sebastian's infamous diary from the original movie, and gets sucked into his family's dark history — a torrid chain of pain and manipulation that apparently ended with Annette pregnant and Sebastian dead. Also involved is Kathryn's stepdaughter Cassidy (played by Samantha Logan), who I'm sure is an absolute gem being co-parented by the Upper East Side's HBIC and what-not.

But, what is Kathryn's direct involvement in this whole situation? Because she certainly isn't school-aged anymore.

According to Deadline, Kathryn is up to her old tricks and vying "for control of Valmont International as well as the soul of Bash Casey." But how? Well, I think it's fair to assume that Kathryn and Sebastian's already-absent parents have probably kicked the bucket, and that would've left Sebastian in control of Valmont International. But the whole being-dead thing means the company would likely go next to the Valmont line... aka, Bash. Except, Bash must be a minor just shy 18 (the timing makes sense, considering he would had to have been born nine months after Sebastian and Annette's 1999 tryst) — so perhaps Kathryn is managing it for the time being, fuming that the new Valmont might get in the way of her newfound fortune.

See, initially I thought that Kathryn would try to usurp the Valmont fortune the way she always does: by means of seduction and devastation. Honestly, it wouldn't be at all out of character, and it seems almost... poetic in a way. If we wanted to take things to the next level, it wouldn't be crazy if Kathryn enlisted her more-appropriately aged stepdaughter as a pawn, a means to seduce Bash and get her hands on Valmont International.

Except... uh, again, Bash is probably a minor, so nobody's about to marry him. So what else could be happening?

There are endless possibilities here. Perhaps Annette has recently passed, and Kathryn — being Bash's next closest "relative" — adopts him, ushering him into the scandalous world of Manchester Prep. Or, maybe Annette hasn't been in the picture at all and originally gave up Bash for adoption. Kathryn's all set to take on Valmont International when it's revealed that — surprise! — there's another heir to the company, and Kathryn quickly adopts him to make sure she gets her hands on the fortune. Until the show airs, it's difficult to be sure of anything when it comes to this messed up family.

One thing is for sure: I think we can still assume there'll be seducing going on, because you know how the Valmont-Merteuil clan likes to keep things all in the family.

I guess we can speculate all we want, but it'll be a little while before we truly know what Kathryn's intentions are. Although, believe it or not, I do have a sneaking suspicion that they'll still be very, very cruel.