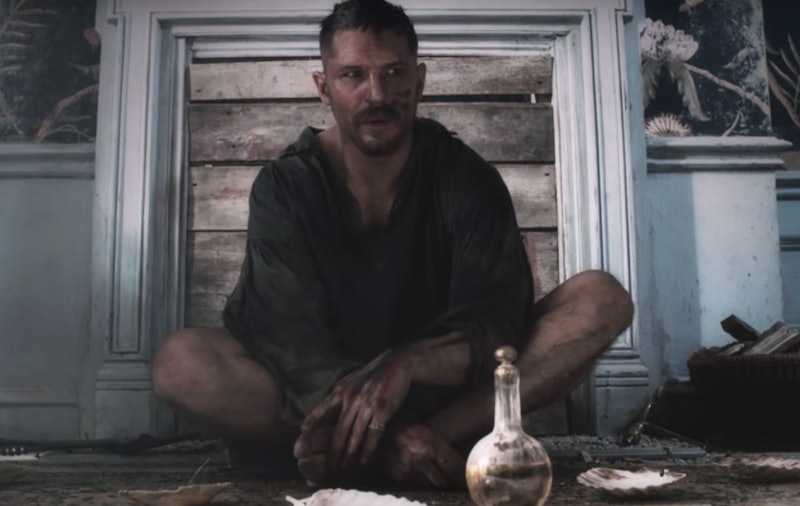 Everyone needs a little Tom Hardy news to keep them going, right? So Thursday became awesome when the trailer dropped for Hardy's new FX show Taboo, which is based on a short story the actor wrote with his Dad. I'm sorry, but how cute is that? The miniseries stars Hardy in the role of James Delaney, an adventurer who returns to England after a decade in Africa to avenge the death of his father. Delaney also apparently goes to war with a mysterious-sounding East India Company. (It's worth pointing out that, according to The Telegraphthe East India Company was real — however, unlike in the show where it's being modeled as a CIA-like organization, it was actually a British joint-stock company that was formed in the 1600s to promote trade between England as the East Indies. The more you know!)

While I'm sure the plot is great, there's only one thing I was able to really focus on when it comes to the Taboo trailer — and that is the fact that the beautiful Tom Hardy is in it. While there are probably a whole host of other reasons people should watch the show, one of the most important things as far as I'm concerned is that Hardy will be terrifying, brooding, creepy, and topless, all in equal measure. Need more proof? Here's are a few amazing Tom Hardy GIFs from the Taboo trailer!

An important thing to know about Taboo — Tom Hardy wears a rather impressive top hat in it.

2. The Hat Looks Good From All Angles

Seriously, check this out.

3. There Are Creepy Moments

4. Tom Hardy Sits At A Table

5. Then Creeps Around A Ship

Tom Hardy is not naked in the trailer, but his glorious tattoos are on display as he carries a spear round a forest. Hello!

7. Tom Hardy Has A Great Beard

With just the right amount of stubble, I could watch Hardy's face all day long.

8. He Chills Out By The Window

9. Hardy Gets Covered In Dirt

I know that Taboo is set in the olden days, but I just want to get him in the shower and hose him down. I can't be alone in feeling this way.

Don't worry, Tom Hardy. Your hat is the best!

Maybe Hardy is cooking a pizza?

I don't even want to know what this is about.

14. And Maybe Even Terrifying

The short trailer is a heady mix of disturbing images. Plus, Hardy. Did I mention that he's in it?

Talk Bane to me, would you?

It's the smallest details that are the most important.

17. And Raises His Eyebrows!

The Taboo trailer features Hardy using his face expressively, and I'm totally down with that.

Basically, Taboo looks kinda creepy, dark, and awesome. But it has Tom Hardy in it, so it's a must-watch. Watch the full trailer for yourself now!