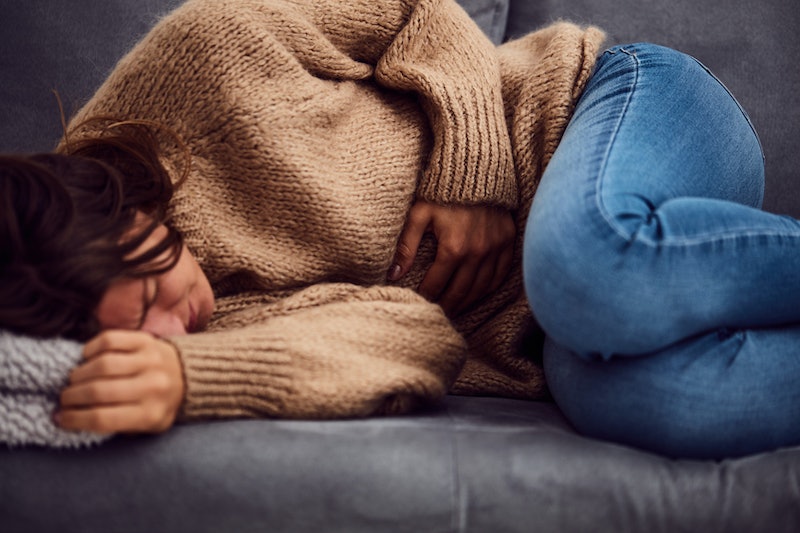 When you think of intrauterine devices — contraceptives which are also known as IUDs — the first things that probably come to mind are questions about how painful the IUD insertion process might be. We often read stories about how IUDs are inserted because, yeah, the procedure is a big deal (and, yes, it hurts like hell). But what about after it's inserted? What is life with an IUD like? Do you really know how the IUD works to prevent pregnancy, and how those changes affect your body?

Though the IUD comes in both hormonal and non-hormonal options, this piece covers how the non-hormonal copper IUD works. Though hormone-based IUDs function by emitting hormones similar to those contained in other hormone-based contraceptives, the copper IUD has its own hormone-free way of preventing pregnancy. And the copper IUD offers unique benefits that have many women lining up at the door to get it inserted: It's cheap, it lasts the longest (10 years!), and, of course, it's highly effective. Every year, less than 1 out of 100 women get pregnant while using the copper IUD.

So how exactly does an IUD with no hormones work? And how will it change your body? You should discuss your specific health situation with your doctor before you commit to any form of contraception, including the copper IUD. But if you're intrigued, or have been interested in learning more for a while, read on to find out six things that happen to your body when you get the copper IUD.

1. Your Uterus Will Produce A Fluid That Is Toxic To Sperm

How does the copper IUD keep sperm from implanting if it doesn't have hormones? Instead of thinning out your uterine lining the way hormonal contraceptives do, the copper acts as a natural spermicide in your uterus and fallopian tubes by making your body produce a new fluid that prevents pregnancy.

When the copper is placed inside the uterus, it creates a concoction of white blood cells, copper ions, enzymes, and prostaglandins, all of which band together to create a fluid that kills sperm. This fluid also creates an inflammatory response in your uterus, which prevents fertilization from taking place.

2. Your Period Flow Will Probably Gets Heavier

If there's one thing that you already know about copper IUDs, it is probably that they make your bleed more during your periods, as opposed to hormonal contraceptives, which often lighten or eliminate your period. You get lighter periods on hormonal birth control because the hormones make your uterine lining thinner — which is not the case with a copper IUD. It's not uncommon for women using the copper IUD to report that they have to change their tampon or menstrual cup much more often than they did pre-IUD, and their periods often last longer than they did pre-IUD, too. So if you already have a hard time with a super heavy flow, this might not be the best choice for you.

3. Your Menstrual Cramps May Get Worse

Along with the longer, heavier periods, copper IUDs are also known for inducing very strong menstrual cramps. Though there is not a lot of medical literature out there on the relationship between cramps and copper IUDs, I can personally report that I have heard from a lot of women with copper IUDs that they have had to lie down and completely take a day off when they start bleeding. Some experts say that the increased cramp pain is supposed to go away after the first few months, but as someone who once had the Paragard IUD for over eighteen months, I can tell you that's not always the case. There are just some of us who battle excruciating cramps regardless of how long we've had the IUD.

The cramp situation differs from person to person, but keep in mind that your periods shouldn't make you feel like the apocalypse has come every month. If that's happening, talk to your OBGYN and see what can be done.

If you're wondering why someone would put up with bad cramps and heavy flows, here's the trade-off: The lack of hormones in your copper IUD will keep you from having to deal with side effects of extra progesterone or estrogen in your body. That means you won't have to deal with extra acne or mood swings, both of which sometimes result from hormonal IUD use. Other side effects from hormonal contraceptive use — like changes to weight or sex drive — also don't result from using the copper IUD.

Unlike hormonal contraceptives, the copper IUD doesn't cause your body to stop ovulating, a fact that sometimes gets lost in all the IUD talk. This means that there's no window of temporary infertility after you stop using it, which there can sometimes be with some forms of hormonal birth control. As soon as you get your copper IUD removed, you should be as fertile as you were before.

6. You Might Be More Likely To Develop Yeast Infections

Whether it's hormonal or non-hormonal, having an IUD inserted puts you at a higher risk for contracting a yeast infection at some point. A 1988 study of over 200 women showed that 20 percent of the women with IUDs had a significant accumulation of yeast, while only 6 percent of those who didn't have IUDs had a major yeast accumulation. None of the participating individuals had any predisposition to contracting yeast infections in the past.

Of course, this doesn't guarantee you'll develop a yeast infection if you choose to get a copper IUD. Just keep in mind that it's common for Candida to accumulate on the tails of IUDs, so your likelihood for getting an infection increases, even if only slightly. But don't get too nervous.

Actually, that holds true for all the other side effects of the copper IUD, as well — though all of these side effects are common among copper IUD users, none of them are 100 percent guaranteed to occur. Talk to your OBGYN if you want to know more about how this form of birth control will work for you, and whether your vag will be happy with the commitment.