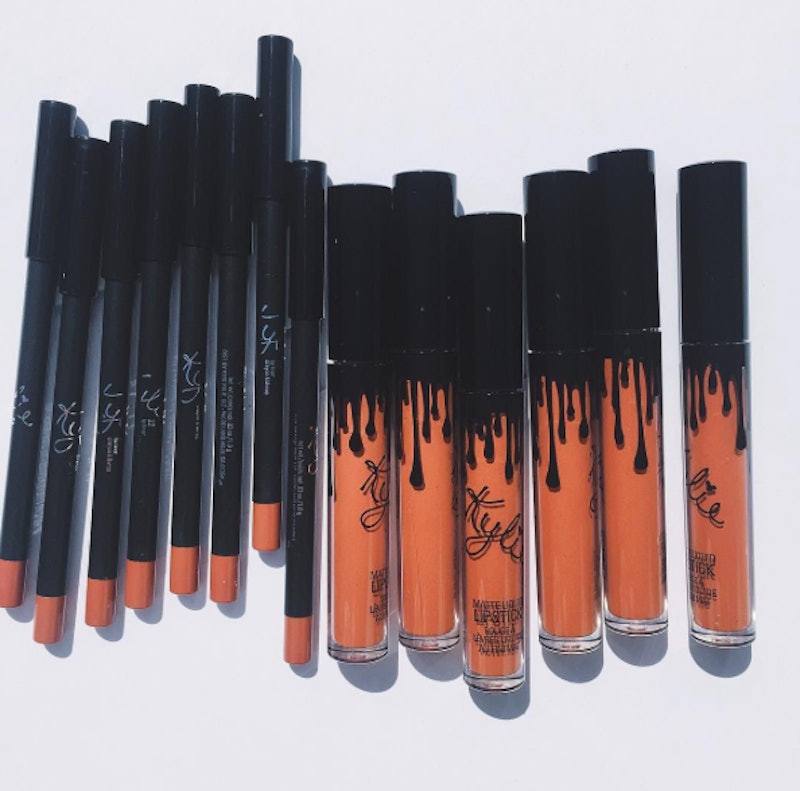 It's finally here, guys. Yet another restocked line of Kylie Jenner's Lip Kits, and best of all: a new color. If you are wondering how people are receiving the new lip hue, there's only one place to look — social media. The Twitter reactions to Kylie's orange lip kit, 22, prove her fans are loving her products, despite the fact that most of them haven't been able to get their hands on one at all.

Jenner first teased the new shade in her Lip Kit by Kylie line-up on her personal Instagram account earlier this month. At the Vera Wang fashion show, Jenner sat with best friend and model, Jordyn Woods, and snapped a pic which she captioned "I'm wearing candy and koko and Jordyn may be wearing a new @kyliecosmetics color ;)" Woods was rocking a warm, spicy orange-red matte lip, which we now know is the new Lip Kit shade.

The Internet went wild, naturally, and soon after, we all learned that the new shade was named "22" and would be available for purchase today, Feb. 29, along with the rest of the restocked line.

So far, the reactions have been positive. Fans are crying real, actual tears at the idea of getting their hands on the new shade. Others are a bit confused. Why is the new shade named 22, while all the others are names or words followed by the signature "K?" Meanwhile, makeup fanatics are talking about how the shade looks similar to OFRA's recent liquid lipstick collaboration with YouTube beauty vlogger KathleenLights, called Miami Fever. It turns out, the warm red hue is a trend people want to wear, as opposed to the cool, blue reds we are used to seeing.

My guess as to why the lip kit name is K-less? Perhaps Jenner is looking to establish her own strong brand identity, so maybe from here on out, we'll see less and less of the K signature.

But back to what everyone else is thinking. Here's how Twitter is reacting to Kylie Jenner's new lip kit, 22.

In classic Kylie Jenner Lip Kit frenzy fashion, the whole line sold out in just under 20 minutes. The site crashed after around four minutes, and finally sold out with 143,490 active users still online. True Brown K and Mary Jo K were the first to go, and Koko K was the last color standing. Behold our collective surprise, triumph, and defeat. Despite this event, we will live to shop another day, friends.