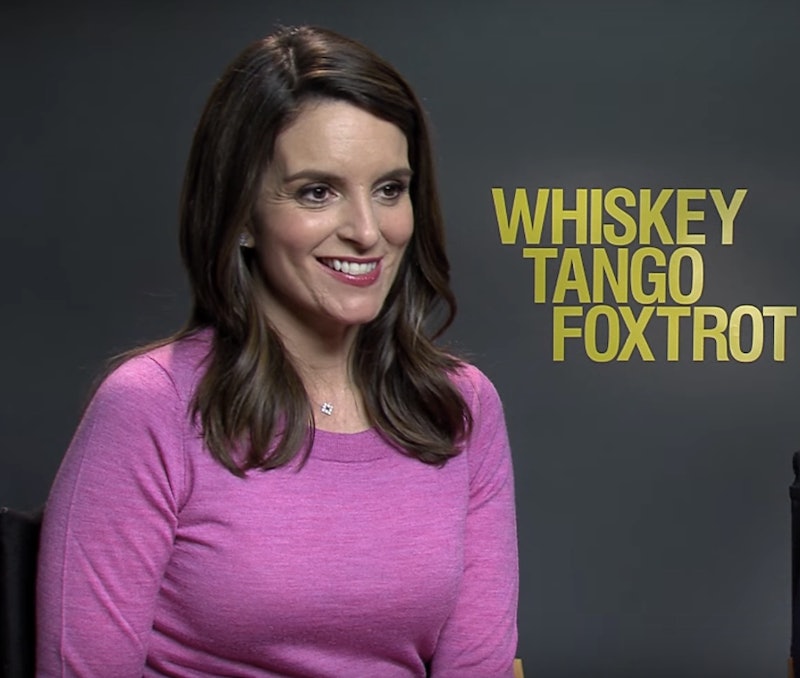 When I spoke with Tina Fey and Margot Robbie recently about the feminism of their new film, the war-set dramedy Whiskey Tango Foxtrot featuring both actors as journalists reporting in Afghanistan, I thought it'd be interesting to hear their take on some of the other things happening in the world these days affecting women, from the rise of Kylie lip kits to the trend of asking celebs if they're feminists. Unsurprisingly, both actors had a lot to say on the subject, especially on the last example; as Fey explains in the clip below, asking celebrities — especially women — if they're feminists is a good way to get them to speak up, except when their answer happens to be, like it has been for stars like Susan Sarandon, Sarah Jessica Parker, or Meryl Streep, "I'm a humanist."

Because while these stars may have the best of intentions and believe in the same values as those who proudly identify as feminists, their apprehension towards the term can be frustrating and misleading; as many have explained, feminism and humanism mean two very different things. By calling yourself a humanist rather than a feminist, you're referring to a movement that has nothing to do with the advancement of women's rights, specifically, and it implies an intention of distancing yourself from those who do promote feminism. That very well may be unintentional — there's no doubt that many of the celebs who call themselves humanists fully believe in gender equality — but it's frustrating nonetheless, as Fey expresses in the video below.

Still, she raises a fair point, that female celebrities who are asked directly if they're feminists — and then go on to say the "wrong" thing — are often put on the spot, without time to formulate what perhaps might be stronger answers. We, as a whole, then pounce on their flawed responses, all too happy to call out A-list stars for not standing up for their fellow women. We did it to Streep, and Sarandon, and Woodley, but also to Kelly Clarkson, Joni Mitchell, even, most recently, Gloria Steinem; when it comes to not being a "good enough" feminist, no one in Hollywood is immune.

And it's not that we shouldn't call out these women for their misunderstanding of the word feminism or factually incorrect statements; considering how fraught feminism is and how eager some critics are to attack women, it's important to correct a celebrity with a large following who, even unintentionally, says something false and potentially harmful about her female peers. But when we take it to the extreme, tearing a female star down for one well-meaning but frustrating comment, it does more harm than good. Just think about the uproar surrounding the recent comments by Steinem, a woman who practically created the term "feminist," which implied that women who support Bernie Sanders just want to please men; it wasn't Steinem's quote, but her entire person and worth, that were analyzed, criticized, and cast aside by many, as if her several decades of activism for women's rights were suddenly worthless.

Still, it's a tough call; as Fey points out, it's important to get more women, especially those in positions of power, like celebrities, speaking out about feminism in a public matter, even if their answers occasionally cause chaos. Thankfully, stars like Fey and Robbie have seemingly no qualms about sharing their views on the subject, and are calling on other women to do the same.