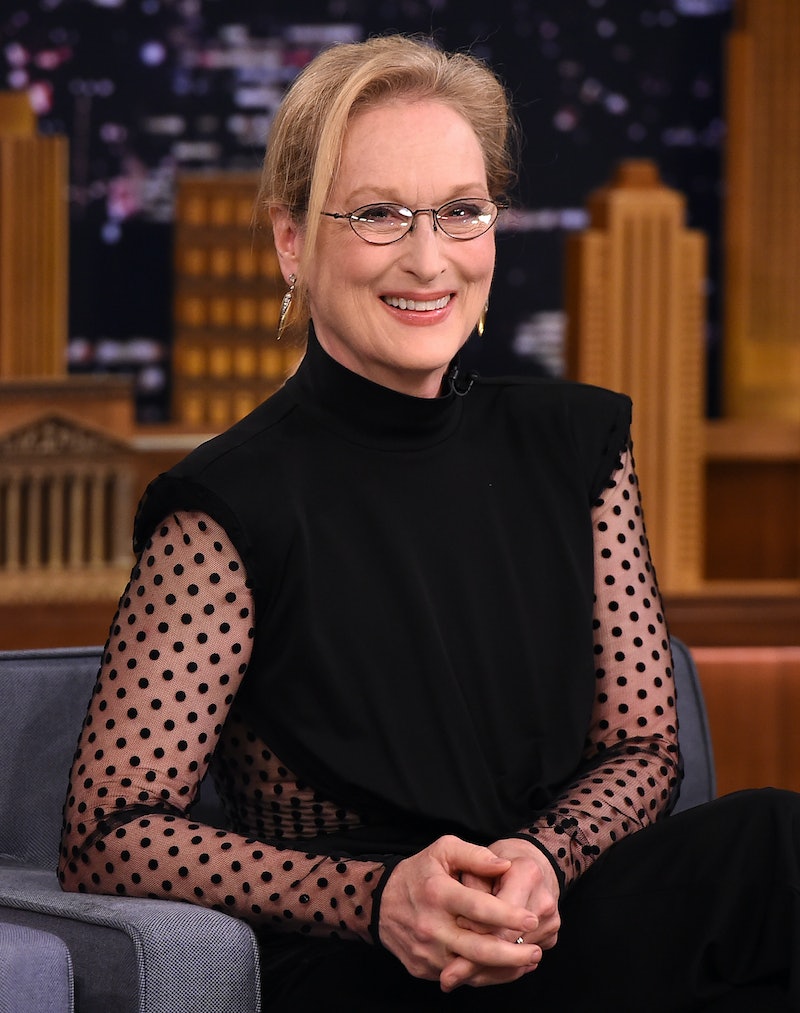 Well, this is somewhat disappointing. While chatting with Time Out London, Meryl Streep said she isn't a feminist. Huh? That can't be accurate, right? After being asked if she is a feminist, the Oscar-winning actress said, "I am a humanist, I am for nice easy balance." Her answer might surprise some, especially based on Streep's actions and activism for women. How can she not consider herself a feminist?

I am one who usually backs the Suffragette actress in most everything she says and does, but I'm having a difficult time digesting this. To be clear, you don't have to identify as a feminist to fight for women's rights or advocate for women on all fronts, but when someone, especially a woman, says she isn't a feminist, I feel like it reflects badly on the word, the movement, and others who consider themselves feminists.

Maybe Streep just isn't into labels and would rather not use the term feminist. If you believe in gender equality, which I'm pretty sure the 66-year-old does, then by definition you are a feminist, so why not shout it from the rooftop? If some women are seemingly afraid of the word, it just feeds into the unfortunate controversy and stigmas that come with feminism.

As for the word "humanist," this isn't the first time I've heard someone use that term. For example, Sarah Jessica Parker is a humanist, as she once told Cosmopolitan. She said, "We would be so enormously powerful if it were a humanist movement." You know who might not agree with Parker and Streep? Hillary Clinton. While being interviewed by Lena Dunham, Clinton said the following about feminism:

I'm always a little bit puzzled when any woman, of whatever age but particularly a young woman, says something like, "Well, I believe in equal rights, but I'm not a feminist." Well, a feminist is by definition someone who believes in equal rights! I'm hoping that people will not be afraid to say — that doesn't mean you hate men. It doesn't mean that you want to separate out the world so that you're not part of ordinary life.

Me too. Me too. Even though the Into the Woods actress says she isn't a feminist, Streep sure has acted like one on more than one occasion, which is a great thing and something I am most definitely not angry about. Check it out.

When She Did This At The Oscars

Remember Patricia Arquette's 2015 Oscars speech? It was all about gender equality and equal pay. As you can see above, Meryl and J. Lo couldn't get enough of it.

When She Wrote Congress A Letter

In June 2015, Streep wrote Congress a letter asking them to reintroduce the Equal Rights Amendment of 1972 into the U.S. Constitution. Part of her letter read as follows: "I am writing to ask you to stand up for equality — for your mother, your daughter, your sister, your wife or yourself — by actively supporting the equal rights amendment."

When She Talked About A Gender Equality Exposé

According to Streep, an exposé about gender equality is coming to Hollywood. The film would focus on sexism in the entertainment business, which is something she is very outspoken about.

When She Played Feminist Characters

When hasn't Streep played a feminist character, including her upcoming role in Suffragette?

When She Talked About Ageism

Streep's experienced ageism, like most women over 40 in Hollywood. As she told Vogue in 2011, "I remember turning to my husband and saying, 'Well, what should we do? Because it’s over.'"

In 2014, Streep didn't hold back when it came to criticizing Walt Disney. She said, "It must have killed him to encounter a woman, an equally disdainful and superior creature, a person dismissive of his own considerable gifts and prodigious output and imagination."

She sure acts and talks like a feminist, right? Whether she says she is or isn't one, I still respect Streep for her amazing work in making this a better world for all women.

More like this
Sandra Bullock, Girlboss Extraordinaire
By Matt Harkins & Viviana Olen
Spice Girls’ Net Worth: The Richest Member Is Wealthier Than The Rest Combined
By Hugh McIntyre
Lydia Leonard Is Setting The Record Straight
By Olivia-Anne Cleary
The 'Selling Sunset' Cast Isn't Buying Christine's Excuse For Ditching The Reunion
By Brad Witter
Get Even More From Bustle — Sign Up For The Newsletter