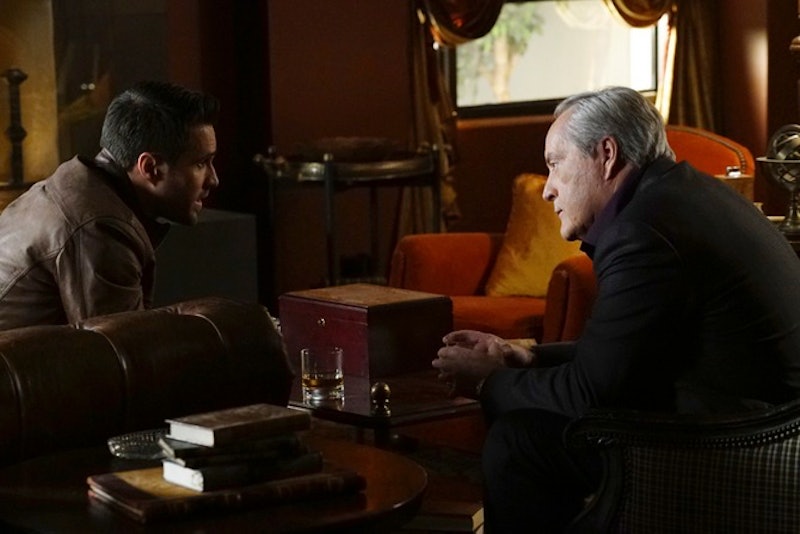 Marvel's Agents of S.H.I.E.L.D. is returning to ABC on March 8, and there's exciting news for fans: on Monday, Nerdist News revealed that S.H.I.E.L.D's Agent Grant Ward will come back as Hive in the mid-season premiere. He's one of the horrifying villains in the "Secret Warrior" comic book. Brett Dalton, formerly Ward, is now back as Hive, and he looks terrifying and definitely zombified in the sneak peek photo.

In the mid-season finale, Agent Ward was killed by Coulson on the planet of Marveth. But producers Joss Whedon and Marissa Tancharoen revealed to Nerdist:

As we saw in the midseason finale episode, Ward is back on Earth, but he’s definitely not the same Ward who went through the portal to the alien world.

Wouldn't anyone be changed after getting murdered on a different planet?

In the comic books, the evil Hive is from the planet Marveth in the Secret Warriors series. Though the first photo of Dalton as Hive is humanlike, he probably won't be much longer if, as International Business Times points out, the show follows the comic books in which Hive is covered in creepy tentacles.

But Whedon said that the show's interpretation of Hive will definitely stand apart from the comics:

[He's] going to have its own unique twist and be very different from what fans have seen so far. We will see similarities that pay homage to the original character, but fans will see that Hive is taking an exciting new direction in the world of Marvel’s Agents of S.H.IE.L.D.

The series returns on March 8, and fans are hoping that Dalton won't stay much longer in human form. As different as he might be in his evil form, there's just something about a tentacle-face that makes me squirm.

Another formidable foe for the agents in Season 3 will be Gideon Malick, whose enemies also include (you guessed it) Grant Ward. In the finale, he offered Ward a way out, which he rejected. And it didn't end well for him, so Malick is one to watch for when Ward returns to Earth as Hive.