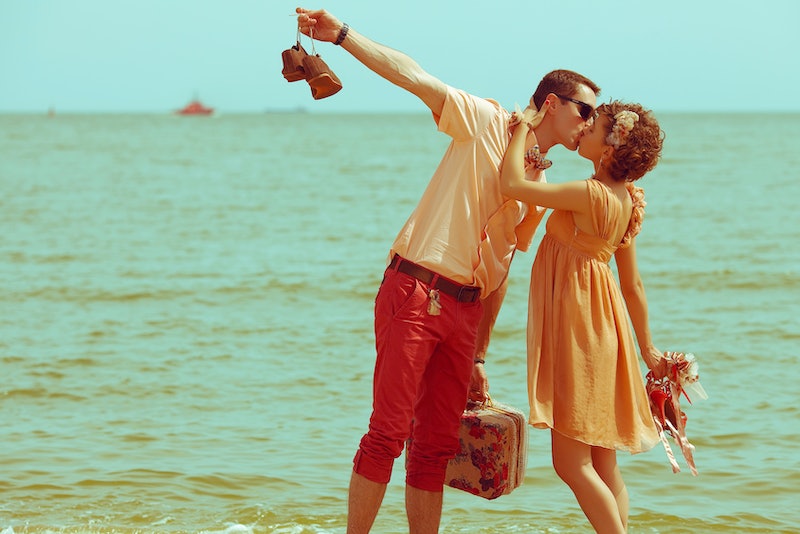 Swapping spit is sort of a strange hobby when you really stop and think about it, right? Lucky for us curious kissers out here, there is an entire discipline devoted to the scientific research behind kissing; it is called philematology. Rafael Wlodarski, an evolutionary behavioralist whose research at the University of Oxford focuses on human sexuality, spoke to Quartz about his philematological findings.

Many of the specific studies that Wlodarski discusses in the article deal with gender differences, such as his 2013 study that found women prioritize kissing more than men do, "at least in a heterosexual context." Perhaps most interesting from Wlodarski's research is that the same study argues that there is “very little evidence to support the hypothesis that the primary function of kissing is to elevate levels of arousal.” So why do we kiss, if it's not just because it feels good?

Among many other things, philematology looks at from what kissing could have evolved. Have you ever seen a mother bird feed its baby bird by chewing up food before spitting it into the child's mouth? Well, that's called "kiss feeding," and some researchers actually think making out may have developed from that maternal activity. 3,500 years old Sanskrit scripture, called the Vedas, contains the first documentation of kissing that we know of, and we have proof of the celebration of romantic kissing in other ancient cultures, like Rome, too. All of these different historical perspectives on lip locking are considered by philematologists in their research.

Here's what else scientific research tells us about smooching.

1. We Swap 80 Million Bacteria With Our Partners

Kissing, like sex, comes with an exchange of bodily fluids. According to the American Journal of Medicine, when we kiss someone, our mouths trade 0.45 milligrams of sodium chloride, 0.7 milligrams of protein, 0.71 milligrams of various fats, 0.18 milligrams of organic compounds, and 9 milliliters of water. How romantic! Additionally, we swap approximately 80 million bacteria with our kissing partners, but don't get weird about it! The majority of this bacteria is completely harmless, and in comparison, a handshake transfers about 124 million bacteria between two people.

2. We Remember Our First Kisses

But now let's step away from these germ-centric stats and focus on some cuter numerical facts. Did you know that psychological studies show that a person typically remembers 90 percent of the details of their first kiss? Awwww...

4. There's One Animal Who Kisses As Humans Do

Yes, many animals exhibit behavior similar to kissing. When dogs lick each other and elephants stick their trunks into each others mouths, it can be interpreted as a kiss. However, studies of primates have shown that there is only one other animal who kisses as humans do and for the same reasons that humans do: the bonobo. The behavior of bonobos in these studies demonstrated their use of kissing to comfort each other, bond with each other, and resolve conflicts. Essentially, bonobos kiss and make up after arguments, just as we do. It is fascinating that we have this unique similarity since humans and bonobos have 98.7 percent shared DNA; this fact makes scientists wonder, then, if something about kissing is genetic or in our DNA.

5. Why We Kiss Romantically

Kissing in and of itself is pretty weird when you think about it, so what makes it so sexually attractive to us? Why do we kiss romantically? There is no single answer, but as one of Wlodarski's aforementioned studies suggests, there must be more than sexual arousal driving us to engage in lip-locking. In the case of heterosexual women, at least, it is thought that the swapping of chemicals allows them to subconsciously judge a mate's immune compatibility. For everyone of any gender and sexuality, kissing is considered to be a method of "[sampliing] each other's pheromones."

Also though, let's not forget that our lips have hella nerve endings and kissing just feels really good, too.

6. Your Brain On Kissing

When we kiss, our brains release a lovey-dovey mixture of the chemicals and hormones dopamine, oxytocin, and serotonin. Oxytocin is also known as the love hormone because it creates that physical "warm and fuzzy" feeling. This is also why kissing reduces stress. The rush of dopamine in the brain has also been proven to activate the same neurological regions as cocaine — explaining why love is, indeed, a drug.

First, we have to specify whether we are discussing romantic or non-romantic kissing. For example, in 90 percent of cultures, parents and children kiss each other. But what about romantic kissing? Despite the assumed universality of kissing assumed by Western culture, a study of 168 cultures, published in Sapiens, revealed that only 46 percent of the world's population romantically kisses on the lips. As the researchers have surmised from the data so far, "Societies with distinct social classes are usually kissers; societies with fewer or no social classes, like hunter-gatherer communities, are usually not."