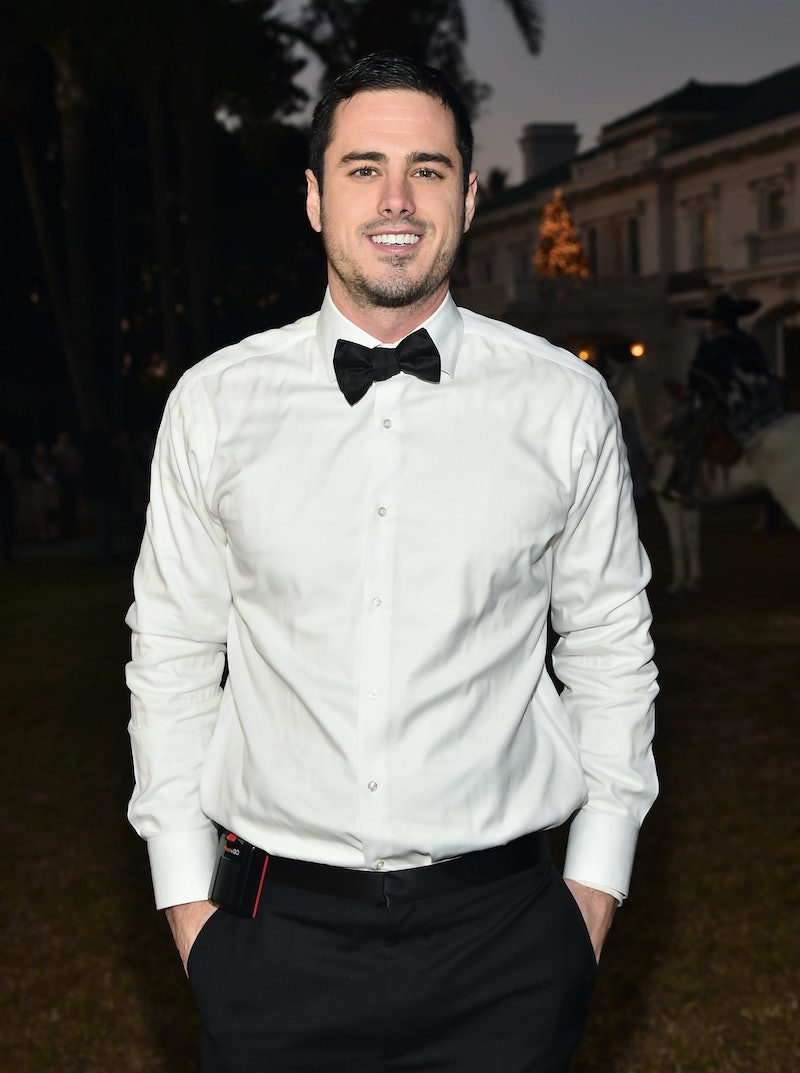 Usually, the stars of The Bachelor are sworn to secrecy about the outcome of the season until after the finale airs, but this time, there's been a major exception. While appearing on Good Morning America Tuesday morning, Ben Higgins announced he's engaged, despite the fact that it goes against basically everything that has ever happened in the history of this show. And he must be pretty happy about his decision, because it looks like it didn't get much coaxing to get what would normally be pretty confidential information out of him. Of course, The Bachelor is always intended to end in ABC's leading man getting down on one knee, but as anyone who's watched the show knows, it doesn't always end that way. And by Ben dropping this kind of news on us, he's not only confirming that he does propose during the finale, but also that he and his new fiancée are still together today.

"I am engaged — I can say that?" Ben said on the show, according to People. "I haven't said that in an interview yet! You don't know how much stress and weight that is, to carry for so long. Good Morning America, I am engaged! Yes, Finally!"

First of all, it's absolutely precious that Higgins is this excited to announce that he got that happy ending he's been looking for, but second of all, I should be way less surprised than I am that he announced it two weeks early. All season long, he hasn't exactly been playing by the rules, and there have been plenty of other times he's gone against Bachelor tradition.

When He Gave Out Gifts

Early on in the season, Ben brought gifts to some of the women who were left out of a group date that made him think of them. It was such a sweet thing to do, and it typically isn't done on The Bachelor. It might go against convention, but it was an awesome way for Ben to show that he was separating each relationship with these women from the rest.

When Olivia was still on the show, Ben spent a lot of his free time with her, and since then, he's been finding time whenever he can to hang out with Lauren B. Most other Bachelors have done a better job at keeping their poker face on, but not this guy!

When He Brought Emily To Meet His Parents

Usually, meeting the parents is reserved for after the fantasy suite dates, but right before hometowns, Ben decided to take Emily to meet his parents because he was unsure of where his relationship with her was going. Unfortunately, after talking to his mom about it, he decided to send her home and it was a totally awkward date, but it was still a nice change of pace.

When He Told Two Women He's In Love With Them

During Monday night's fantasy suite dates, Ben told both JoJo and Lauren he loves them. This puts him in a pretty tough spot, but it's admirable that he's willing to dive in head first and say what he really feels, even though the Bachelor is normally supposed to stay mum until it's time for the proposals to happen on the finale.

Higgins isn't the typical Bachelor, and maybe that's why I (and so many others) love him so much. Keep breaking those rules, man. It's keeping things interesting!