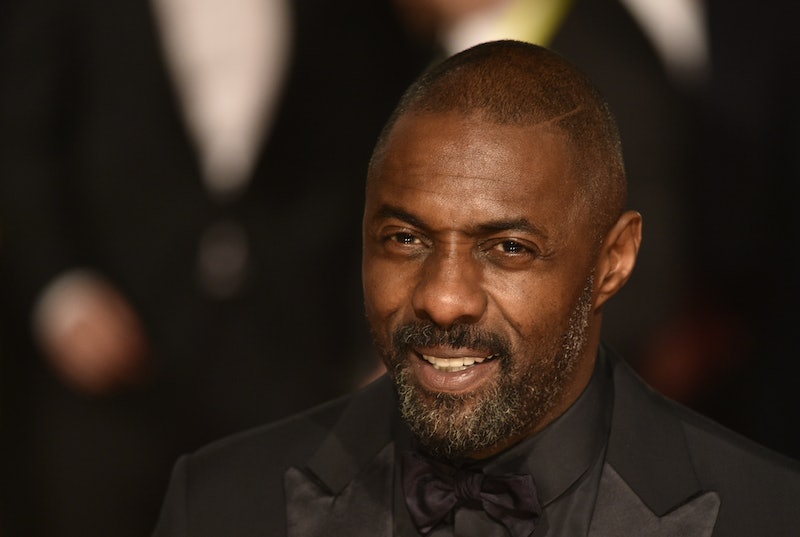 In news that has ignited the Internet on Tuesday, Idris Elba has been cast in The Dark Tower alongside Matthew McConaughey as the main characters in the long-awaited adaptation of one of Stephen King's best-loved series. While there are many details yet to be confirmed (which of the books, for instance, will the movie cover?), this latest casting news has gotten many people hot under the collar for a plethora of reasons. Namely, Idris Elba is super cute, so The Dark Tower has become a way more attractive movie as a result. However, his casting has also been met with some negativity, because the character he'll play Roland Deschain, also known as The Gunslinger, is described as a "grizzled white guy".

It seems completely ridiculous that anyone would take issue with the casting of Idris Elba in The Dark Tower . Not only has he starred in beloved content like The Wire and Luther, he's also been touted as being the perfect candidate for the role of James Bond (I couldn't agree more). If anything, we should be celebrating the fact that everyone involved in The Dark Tower movie has had the foresight to cast a formidable actor who will bring one of Stephen King's best loved stories to life.

Readers can often be a stickler for character descriptions, and this is not the first time that fans have questioned the casting of an actor in a particular role. For instance, when it was announced that a black actress would be playing Hermione in stage play Harry Potter And The Cursed Child, many fans were unhappy with the news. But even author J.K. Rowling supported the decision, and said on Twitter, "Brown eyes, frizzy hair and very clever. White skin was never specified." While readers may have a particular idea in mind of how a character should look and act, the fact that authors are open to colorblind casting is important.

Much like J.K. Rowling, Stephen King is excited about the movie version of his epic series, The Dark Tower, finally being cast. Speaking to Entertainment Weekly, King said of Elba, "I think he’s a terrific actor, one of the best working in the business now... For me, the character is still the character... He can be white or black, it makes no difference to me. I think it opens all kind of exciting possibilities for the backstory.” Fans of the series should take note of this. Stephen King, who is basically a god at this point, thinks that Idris Elba is the perfect fit for his story, and that's all that matters.

Idris Elba's work speaks for itself. His performance in Beasts Of No Nation recently won him an Independent Spirit Award, alongside nominations at the Golden Globes and BAFTAs. Elba is a fantastic actor, and it's exciting to see him break into the mainstream in such a major way. And something to remember — fans were unhappy when Ben Affleck was announced as the new Batman, but now people are flocking to see the film. Similarly, we'll all look back on Elba's casting in The Dark Tower series as one of the best things that ever happened in the world, like ever. I just know it.