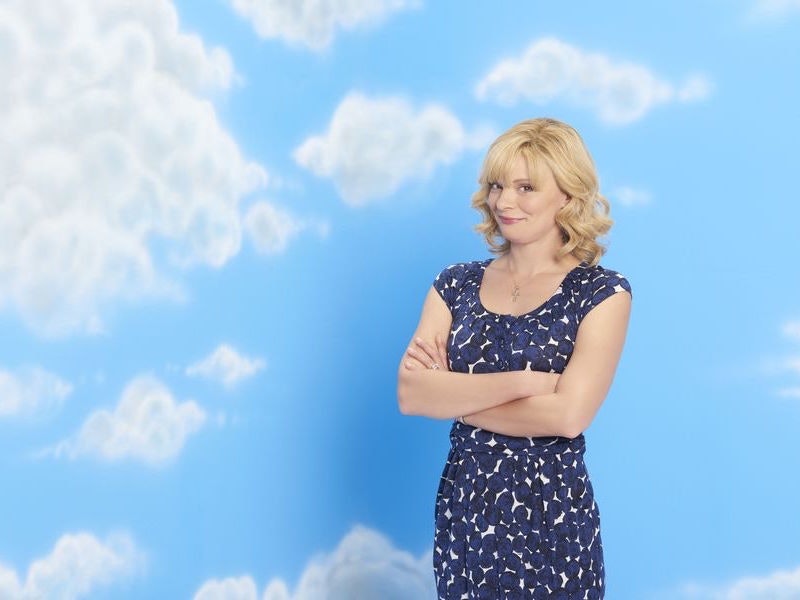 ABC has created some of the most successful family sitcoms to come to primetime TV in a long time, and it seems to be continuing that trend with The Real O'Neals, starring Martha Plimpton. The series has a special two-episode premiere on Wednesday, March 2 and in an interview with Bustle, Plimpton reveals that some of the show's subject matter connects with her own advocacy and causes she cares about. The Real O'Neals is loosely based on creator Dan Savage's own life of coming out to his religious family. Plimpton's Eileen, unlike like her character Virginia on Raising Hope, is a conservative, devout Catholic. When her youngest son, Kenny, comes out to her, she struggles with accepting his sexual orientation. As Plimpton explains, even though she loves her son, Eileen's resistance comes from her belief that homosexuality is a sin, and the actor acknowledges that this is a reality for some religious families.

"Obviously, the reality of many LGBTQ youth who come out is not anywhere near as happy as it's going to be — or could be — on a television show. But the point of the show is to examine the ways in which that resistance is also buffered by the love of your child," Plimpton says. "The fact is, your child is your child and you're never going to stop loving them." Besides exploring Eileen's complicated relationship with Kenny, The Real O'Neals will also cover how the family is dealing with the complicated issues of faith, divorce, and eating disorders. All with humor along the way.

However, multiple religious groups had already spoke of boycotting The Real O'Neals back in April and Plimpton says the intention of the show is not to make fun of anyone, but to use the sitcom's humor to discuss difficult subjects. "I think sometimes we have to make fun of ourselves in order to see ourselves more clearly," she says. "We have to be willing to laugh at our failures and our insecurities and our weaknesses in order to advance the ideas of love and acceptance and family unity."

Both Savage and Plimpton are advocates for human rights and she says that's one reason the pair became friends. While Savage focuses on LGBT rights, Plimpton has turned to another important issue — women's reproductive rights. It's almost karmic that Plimpton's new series premieres on the same date that protestors took to the Supreme Court to rally against the Texas law that has been restricting access to abortion clinics. Plimpton helped create the nonprofit organization A is For that, according to its website, is "dedicated to advancing women’s reproductive rights and ending the stigma against abortion care."

Plimpton started getting so involved in this cause back in 2010, when there was a major party shift in Congress (something Samantha Bee recently scolded Democrats for allowing to happen on her program Full Frontal with Samantha Bee) with the Tea Party gaining power. "There was an extraordinary backlash against women who dared to speak out about the importance of reproductive health care coverage in insurance policies," Plimpton says.

So she met with some of her female friends to find a way to be more active in responding to the "horrific misogyny that was taking over the media." She credited the case of Sandra Fluke with particularly inspiring her to get involved:

The way she was treated in the media was so horrific and so blatantly misogynist and all of it was centered around shaming her for being a female, for being a sexual human being, and for advocating for birth control coverage. And that shame, which has now been revealed to be sort of the core tool in restricting women's access — or anyone's access — to reproductive health care was something we really wanted to fight against.

A is For, which has run social media campaigns like #ShoutYourAbortion, was founded in 2012, and Plimpton says since 2010, "there has been a great deal of momentum surrounding the subject of abortion stigma and we feel really proud to have been a sort of small part of helping that momentum build over the last five years."

However, Plimpton is aware of the fact that the audience of The Real O'Neals may not always agree with her politics, so she doesn't want to alienate anyone with her personal views. "Diversity of thought and experience and perspective is important to me to respect that — not only politically in general, but in our audience," she says. While she still feels a responsibility to speak out as a private citizen (just check out her Twitter), she says she also knows that:

There are people out there who live in conservative families who struggle to accept their gay and lesbian children and their transgender children. And I want them to feel comfortable watching our show and experiencing that kind of family dynamic in a comedic context. That's really important to me ... for people to feel like they can engage with each other lovingly.

She praises the courage of another ABC primetime show, black-ish, for tackling real-life issues through a sitcom format, specifically mentioning the show's Feb. 24 episode, which discussed the Black Lives Matter movement and police brutality. And though Plimpton doesn't make any promises about her new series, she does hope that The Real O'Neals can play a part in "talking about the lives of LGBTQ children."

As Plimpton advocates for women and hopes her new show will help start a dialogue on gay rights, she also recognizes her own privilege of being a white, heterosexual woman — especially in her career as an actor. "I'm the first to acknowledge that as a white, straight woman I've got a few percentage points in my favor here. I think that there are women of color and trans women and lesbian women who are experiencing a far more of a dearth of opportunity."

While Plimpton says the best acting opportunities for women exist on television, she believes there is still "major, major room for improvement" and that it's something everybody needs to be talking about. "More women writers must be hired. More women producers must be afforded the ability to actually produce. More women directors have got to be hired. More women of color must be hired in power positions." Hopefully, more people in Hollywood will catch on to this as actors like Plimpton continue to speak out about the need for equality in the industry and beyond.

More like this
'Heartstopper’s Kit Connor Revealed Why He Doesn't Label His Sexuality
By Nola Ojomu
'Derry Girls’ Dylan Llewellyn Will Star In C4’s New Queer Comedy
By Rachel Mantock
'Gentleman Jack’s Cast & Crew Are Keen On Season 3, Too
By Frances Stewart
'Heartstopper’s Joe Locke Has A Sweet Message For Queer Fans
By Sam Ramsden
Get Even More From Bustle — Sign Up For The Newsletter