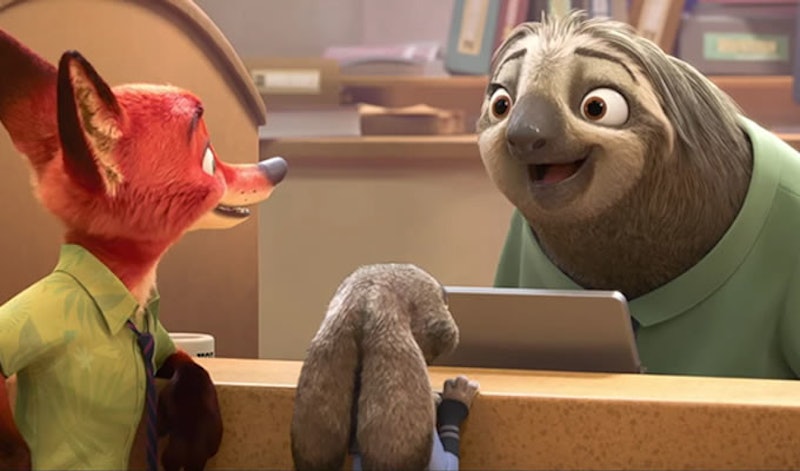 Walt Disney's newest animated film, Zootopia , is really good. As of this writing, the film holds a 100 percent rating on Rotten Tomatoes after 30 reviews. So yeah, it's pretty much perfect. But what makes it so great? Is it the thrilling, noir plot? The important message of tolerance? The adorably huggable characters? Yes, all of these factors undoubtedly contribute to the film's stellar reception, but for me, it's the movie's humor that truly sets it apart. This might be the funniest movie Disney has ever produced, and the funniest part of Zootopia is the sloth scene. But what is it about that segment that is so, so good?

It's not that it's so surprising — as any theatergoer knows, the sloth scene has been overplayed in the film's trailers. The scene in the movie appears almost exactly as the clip that was released online weeks ago, and I've seen it a number of times. But in spite of that, I still found myself laughing — along with the rest of the theater — when I saw the actual scene in the movie. One would think that, since we all knew the jokes already and humor is all about surprise, that we would no longer find it amusing. Yet there we were, a theater full of people, reduced to tears of laughter by animated sloths whom we had all already seen do their schtick probably a half-a-dozen times. But why?

One reason the scene works so well on repeated viewings is that it's essentially a sketch. The scene is just as funny on its own as it is within the context of the movie, and that's due to its brilliant concept. Everyone who's ever been to the DMV knows how painful an experience it is. It takes forever, and to those forced to wait for hours, it seems as if the employees are being slow on purpose. Therefore, in a world populated by animals, the famously slow sloths would of course be the sole employees of the DMV.

OK, so the sketch has a good concept, but then what? Well, any sketch worth its salt takes its concept and then heightens it with more extreme and specific scenarios. Take the famous "More Cowbell" sketch from Saturday Night Live for example. The sketch takes the concept of Blue Oyster Cult's producer ludicrously demanding more cowbell in their song "Don't Fear the Reaper", and they heighten that concept by having Will Ferrell perform the negligible instrument in more ridiculous ways as the sketch progresses.

It's the same strategy seen in the sloth scene. Flash the sloth repeats everything Judy says to him very slowly, and then when the audience thinks he's about to finish his task and relieve the situation, a wrinkle is thrown in where he responds to a joke told by Nick. His slowly spreading smile shows a new facet of his slowness, and gets a bigger laugh than what came before it. Then, in his coup de grâce, he repeats the joke, really hitting home the premise that dealing with this sloth is going to take forever.

The reason the sloth scene works so well is because it's a classically written comedy sketch. The writers obviously know how comedy works, and they use the combination of a clever premise and expert heightening in a way that leaves the audience in stitches every time. This concludes today's lesson in sloth comedy 101.