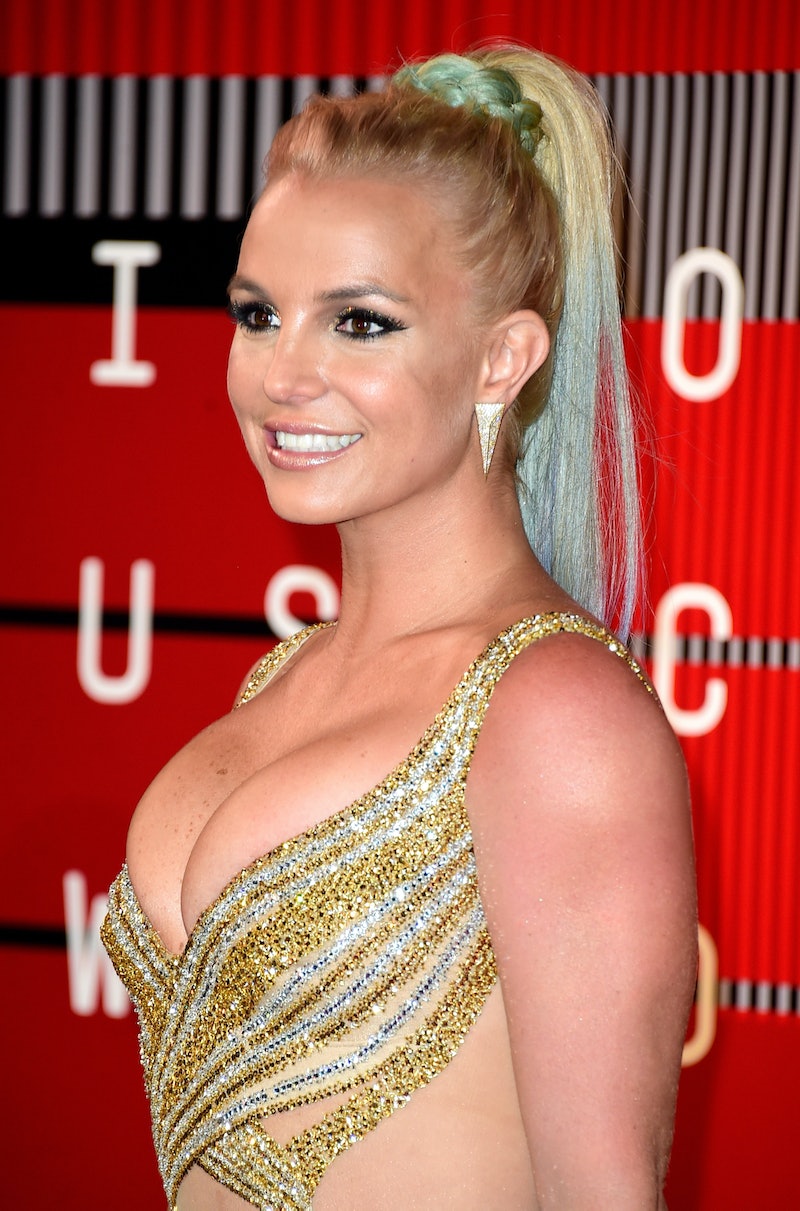 Get ready: The undisputed Princess of Pop (and the newly crowned Queen of Vegas), Britney Spears, is preparing to release new music. The now 34-year-old superstar is featured on the cover of V Magazine's upcoming 100th issue (due out March 8), and in a new interview with the fashion publication, she reportedly called her much-anticipated ninth album (aka "B9") "the best thing" she's "done in a long time." Wow. If that doesn't make you excited to hear new tunes from Spears, I don't know what will!

"Honestly, I'm just particular with this record," she told music journalist John Norris. "It's my baby, and so I really want it done right. I would much rather have it be completely how I want it to be, whether that takes another year for me to do, or two months. I have no idea at this point. But I just know that the direction I'm going in is so good. It's the best thing I've done in a long time."

Spears also described her forthcoming material as "very different": "I'm proud of the work, and it's very different; it's not what you would think at all. But I'm not rushing anything. I just want it to be done right, so that my fans will truly appreciate it." It's wonderful to hear that Spears is taking her time — but, obviously, her fans are anxious to learn the project's release date. Fortunately, Spears' manager, Larry Rudolph, revealed that the LP is "about 80-percent" complete during a February radio interview, which suggests we won't have to wait too much longer for it to arrive.

Below is everything we know about Britney Spears' new album so far:

Admittedly, Spears' recent description of her new songs as "very different" is a bit vague. Luckily, we've heard other tidbits about the album's sound over the past several months that are much more revealing.

For example, Spears told E! she'd recorded both ballads and dance music for B9 at the Teen Choice Awards in August 2015, describing the up-tempo tracks "fun cheeky sexy stuff." Whoa. If there is a more perfect combination of words in the English language, I do not know it.

Additionally, during his aforementioned radio interview in February, Larry Rudolph dubbed B9's style "Britney meets The Weeknd": "The last few albums have been pretty straight-forward pop; this is different," he said. "This is almost, like, if you can almost imagine Britney meets The Weeknd. It's got a really kind of interesting vibe; it's a lot of just, you know, really cool stuff. I think people are going to absolutely love it, and she sounds amazing on it. She has not sounded better in... I don't know when."

Considering Spears' last album, Britney Jean, was the least successful of her career, I'm all for her thinking outside the box and trying something new.

Spears has logged studio time with a number of new collaborators so far, which supports both her and Rudolph's claims that B9 will deliver a fresh sound.

To begin, in July 2015, hip-hop producer DJ Mustard announced that he had worked with Spears, calling their collaboration "harder than hard." In November 2015, he teased that the song was coming "soon" on Twitter, but it has yet to surface. Fingers crossed it makes the cut for Spears' next LP.

Also in July 2015, Spears teamed up with in-demand songwriters Ian Kirkpatrick, Simon Wilcox, and Chantal Kreviazuk. Kirkpatrick is probably best known for his work with Jason Derulo ("Want to Want Me," "Cheyenne"); Wilcox contributed to Nick Jonas' smash hit "Jealous"; and Kreviazuk has co-written songs for Gwen Stefani, Kelly Clarkson, and Jennifer Lopez. There's a whole lot of talent between these three musicians, so I'm really looking forward to hearing what they cooked up with Spears.

In October 2015, Spears hit the studio with British DJ/producer Burns (Ellie Goulding) and songwriter Mischke (Little Mix, Michael Jackson). Little is known about what they recorded, but in a post to his official Instagram page, Burns wrote that he and Spears had "made some fire" together. That certainly sounds promising!

Finally, in November 2015, Spears joined forces with Justin Tranter and Julia Michaels — the ridiculously talented songwriting duo behind recent pop hits like Selena Gomez's "Hands to Myself," Justin Bieber's "Sorry," and Gwen Stefani's "Make Me Like You." Some may say Spears is jumping on the bandwagon here — everybody wants to work with Tranter and Michaels right now — but they're so good at what they do, I can't be mad about it.

Be sure to keep an eye on Spears' social media accounts for more clues about her B9 collaborators — she loves to share pics from the studio.

In the middle of February, a rumor popped up online that Spears would release a new single called "Just Luv Me," which was allegedly co-written by Julia Michaels, in the near future. One of the singer's tweets from October 2015 — in which she only capitalized the words "just," "love," and "me" — made fans very suspicious:

Unfortunately, no other details are known about the mysterious track at this time — but it's definitely a rumor to keep in mind.

When asked about the status of her new album during a February interview with the Las Vegas Sun, Spears replied: "You'll be hearing something new from me soon … very soon." I think I speak for everyone when I say, "We're ready when you are, Brit." Bring it on.