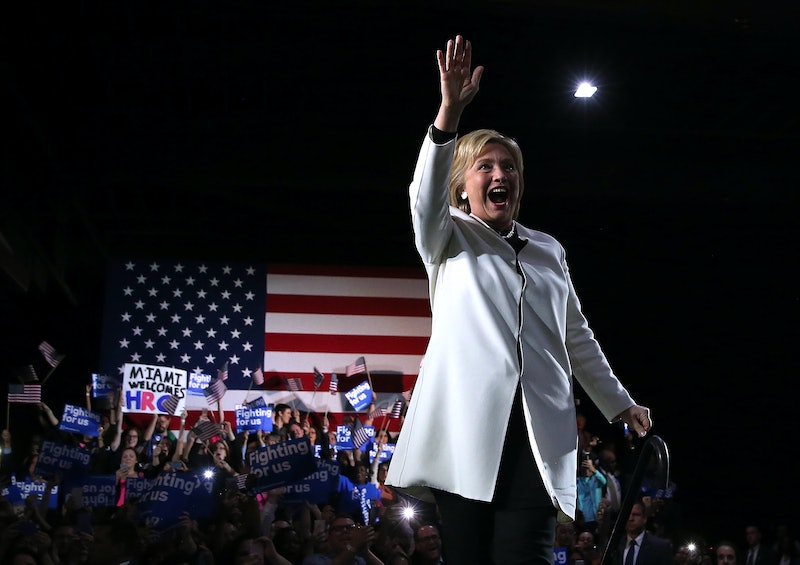 The primaries may not be over yet, but if Hillary Clinton's Super Tuesday speech proves anything, it's that she is already thinking about the national election — and what steps she needs to take to come out victorious against GOP frontrunner Donald Trump. The former secretary of state had already won at least six states when she hit the stage in Miami, Florida, to address a raucous crowd of supporters cheering her on as she inched closer to clinching the Democratic nomination over her opponent Bernie Sanders. But while results were still being counted to see who would snag the most delegates following the Super Tuesday primaries, it was clear from Clinton's speech that while Sanders might be an immediate threat to her campaign, it's Trump she has her sights set on.

"It’s clear that the stakes in this election have never been higher," Clinton said to her audience after winning Texas, Alabama, Virginia, Tennessee, Georgia, and Arkansas. "And the rhetoric we’re hearing on the other side has never been lower... If we resist the forces trying to drive us apart, we can come together to make this country work for everyone."

People were quick to pick up on Clinton's language as she attempted to rally the support of voters who have maintained their loyalty to Sanders, especially now that his nomination looks more and more unlikely. But, her biggest dig was one that clearly pointed to the message Republican Donald Trump has made the center of his entire campaign: make America great again. "We know we’ve got work to do," Clinton said, during her speech. "It's not to make America great again — America never stopped being great. We have to make America whole."

Obviously, Clinton still has some work to do within her own party before she can focus on November's election, but it's a boost of confidence to supporters to see the candidate express her priorities so directly on such an important day. That's not to say the game is over for Sanders, though. The senator, who was victorious in his home state of Vermont and in Oklahoma, is showing no signs of dropping out of the race just yet. Just one day before the Super Tuesday polls, the Vermont senator managed to raise $5.7 million, meaning he has by no means given up on the campaign, or the election.

Still, Clinton's speech indicates she's moved her focus to Trump — and she's got plenty of support on her side. And, it's good that she's showing she won't back down. Following her speech, Trump was quick to fire back with a few choice words of his own. "Making America great again is going to be so much better than making America whole again," he said during his own Super Tuesday speech later in the night. "We [America] are really the source. We have great, great power. The problem is we have politicians that truly, truly, truly don't know what they're doing."

Be on the lookout — no matter what Super Tuesday's final outcome looks like, there's definitely going to be more banter of that nature to come.