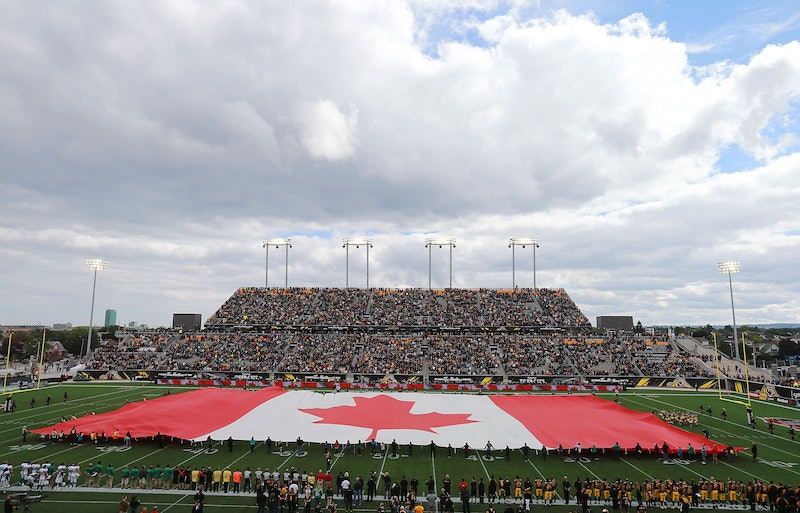 Shortly after Donald Trump declared victory on Super Tuesday, the official Canadian immigration website crashed and displayed an error message to users attempting to visit the site. According to Google Trends, the search term "how can I move to Canada" spiked around midnight ET, just as some final results from the Super Tuesday primaries were leaking in. There's no official evidence of causality yet, but the timing of the website crash seems pretty indicative of a lot of scared Americans jokingly or seriously looking to leave the country in the increasingly likely event of a President Trump.

Trump's Super Tuesday performance is definitely a frightening sign for anti-Trumpers. The business mogul won almost all the Republican contests Tuesday, save Texas, Oklahoma, Minnesota, and Alaska. Trump picked up 237 delegates on Super Tuesday; this gives him 319 total, putting him that much further above second-place Ted Cruz and that much closer to the 1,237 needed to earn the nomination. However, he didn't walk away from Super Tuesday without a couple scars. Texas was a somewhat significant loss for Trump — the Lone Star State was the most delegate-rich up for grabs on Super Tuesday and Cruz ended up with 99 Texas delegates when the precincts finish reporting. The race is far from over, as Trump needs several hundred more delegates to be eligible for the nomination. It might be a little soon to start thinking about a move up north.

Yet, Canada does seem like something of a safe haven for liberal Americans who are balking at the idea of a neo-conservative demagogue holed up in the White House for at least the next four years. Prime Minister Justin Trudeau has already made headway in various social justice issues such as racism and feminism during his short time in office (and he's not bad to look at, either). Also, Canada's mercifully short campaigning season seems a lot less exhausting than America's 18-month slog toward the White House that takes politicians away from their jobs and keeps the country enraptured in a media circus for the better part of two years. Combined with the free healthcare, which definitely wouldn't happen under Trump's potential presidency, Canada seems like a snowy liberal paradise.

Hopefully the Canadian government will release some data soon about the web traffic that caused the site to crash — it would definitely be hilarious to see how much of it came from the United States. In the meantime, if you're an anti-Trumper, there's still plenty of time to canvas for your preferred candidate so that you don't have to deal with emigrating.