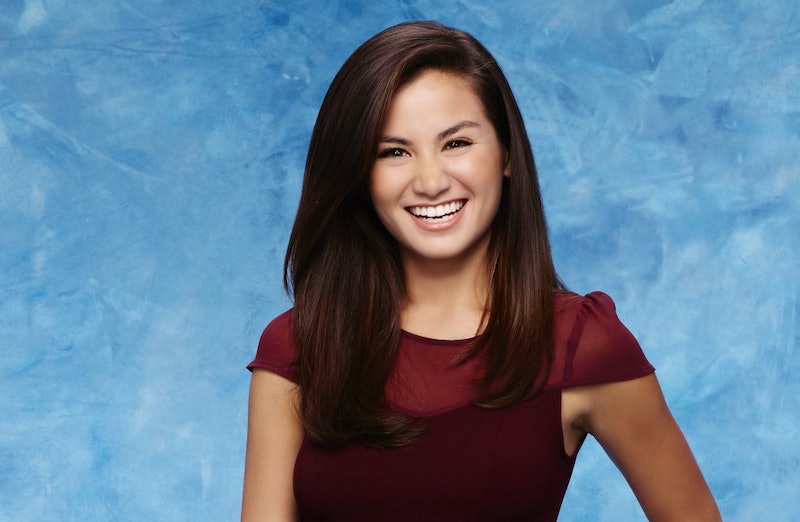 It's getting to be that time of year: the current leading man on The Bachelor has narrowed down his picks to the final two, the women get to tell all, and soon one woman will receive the final rose — along with a Neil Lane engagement ring! Of course, this point in The Bachelor season also marks the time when the debate over who will be named The Bachelorette starts to really heat up. So, will Season 20's recently eliminated contestant Caila be The Bachelorette in 2016? She hasn't been named, but now that her journey on The Bachelor has come to an end, she has officially entered into the running for The Bachelorette.

Caila first caught my attention in the Season 20 premiere when she coined the phrase "50 shades of crazy" to describe the actions of a fellow contestant, and has since won over the hearts of many fans (including me!) by showing she can be funny, strong, vulnerable, and relatable in equal measure. While Caila may not be everyone's favorite for the next season of The Bachelorette, she stands a good chance of being given that title. In fact, I'm so confident Caila will be named The Bachelorette, I've come up with four reasons to back up my claim.

She's Looking For The Real Thing

During her exit interview on The Bachelor, Caila spoke about how she was ready to settle down with Ben. Afterward, she told Good Morning America that she doesn't regret falling in love on the season. "I would have regretted not giving my whole heart to this experience and I really felt like I did that and I fell in love," she said. So we know that she would take The Bachelorette seriously and hopefully find her own happily ever after.

She Has Support From Bachelor Nation

Both former Bachelor Chris Soules as well as Bachelorette and Bachelor in Paradise contestant Michael Garofola think Caila have a serious shot at starring in Season 12 of The Bachelorette. Sure, not everyone is on board with Caila as The Bachelorette, like Kelly Travis from Season 18 of The Bachelor, but I think the supportive Bachelor Nation members outnumber the naysayers.

She Has Stats On Her Side

Five out of the 11 previous Bachelorettes came in third during their respective seasons of The Bachelor, which is more than second or fourth places. If we open it up to include The Bachelor, according to Red Eye Chicago, contestants who come in third place have a 47 percent chance of being named the next Bachelor or Bachelorette. So, statistically, the odds are in her favor — and you can't argue with statistics!

We all know The Bachelor franchise has a diversity problem, but earlier this year it seemed ABC was ready to start seriously addressing the issue when ABC entertainment president at the time, Paul Lee, told EW he'd "be very surprised if The Bachelorette in the summer wasn't diverse." I'm just guessing here, but Caila could be one of the ladies Lee had in mind when he spoke about a "diverse" Bachelorette; we learned more about Caila's family and culture during her hometown date on The Bachelor, including some dishes in a traditional Filipino meal cooked by her mother. Of course, Caila's culture and heritage don't make her a shoo-in, but if ABC wants to address the diversity issue in the franchise by making the next Bachelorette a woman of color then Caila would be able to offer that diversity.

So, The Bachelorette may not have been announced yet, but I have a good feeling Caila has this in the bag. She's sweet, she's funny, she's the statistically ideal candidate, and she deserves her own shot at love after The Bachelor — what more could you need in the next Bachelorette?

More like this
‘The Bachelorette’s Michelle Young & Nayte Olukoya Explained Their Breakup
By Stephanie Topacio Long
Everything We Could Expect In Gabby & Rachel’s Season Of The Bachelorette
By Kadin Burnett
Bachelor Nation's Blake Horstmann Is Dating 'Love Is Blind' Star Giannina Gibelli
By Jake Viswanath and Radhika Menon
Howard Stern's Net Worth: Is He The Richest Man In Radio?
By Hugh McIntyre
Get Even More From Bustle — Sign Up For The Newsletter