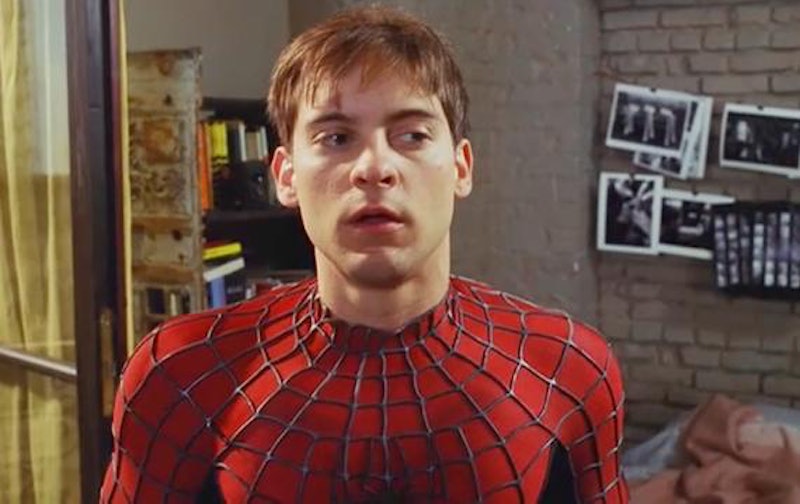 In case you haven't noticed, superhero movies are kind of a big deal. They absolutely dominate at the box office, and this year alone, another six will storm into theaters — all of them likely hits. But it's very possible that Hollywood's current abundance of superpowered films would not exist were it not for the first Spider-Man movie back in 2002. Though it was pre-dated by the fairly succesful X-Men, Spider-Man proved that superhero movies could be box office bonanzas. It became the first movie to gross $100 million in its opening weekend, and was the highest-grossing film domestically the year it was released, which is pretty incredible considering that it was an original film going up against sequels from Star Wars, Harry Potter, and Lord of the Rings. But in spite of the movie's success, Spider-Man was full of plot holes.

Now, Spider-Man isn't exactly regarded as Oscar-worthy cinema, so most people are going to look past the plot holes and focus on the bigger picture: the special effects, the hero's journey, the love story with Mary Jane, yada yada yada. But the time has come to take Spidey to task, so here are 11 of the most glaring plot holes to be found in Spider-Man.

1. Why Doesn't Peter Tell Anyone About The Spider Bite?

Peter Parker receives a nasty spider bite from a missing, scientifically-engineered spider in a lab... so why doesn't he let any of the scientists or his teachers know? Or at least go to a doctor? And why does he hide it from his aunt? It's a pretty nasty bite — he might want to get that looked at.

2. Why Does Peter's Vision Improve?

When Peter gets spider powers, he no longer needs glasses. I'm sorry, was he bitten by a radioactive eagle? Since when do spiders have great eyesight?

3. Why Doesn't Peter Impress MJ With His Powers?

Peter likes Mary Jane, so to impress her, he plans on buying a $3,000 car. Right. Instead of that clunker, don't you think she'd be more impressed by, oh I don't know, the fact that you're a superhero?

4. Why Isn't Norman Osborn Implicated For His Crimes?

As the Green Goblin, Norman uses his company's technology to kill members of a rival company, and then also kill board members of his own company who called for his ouster. How does no one connect these events back to him? Who is on the case, Mr. Magoo?

5. How Does Peter Make His Costume?

I guess I missed the part where Peter got super-seamstress powers. Seriously, that suit is some next level sh*t.

The guy is helping your newspaper make money in the 21st Century. You should love this guy!

Spider-Man talks to Mary Jane in Peter's normal voice; he doesn't go the Batman route and disguise it. So how does the girl who talks to Peter literally all the time not realize they're the same person?

8. Why Does Norman Want To Team Up With Spider-Man?

Isn't Norman all about glory for himself and not sharing the spotlight? What purpose would teaming up with Spider-Man serve?

9. Why Does Green Goblin Lure Spider-Man With A Fire?

Is Spidey known for fighting fires? Of all the crimes probably happening in New York that day, an apartment fire seems like an odd place for Green Goblin to hedge his bets on a Spider-Man arrival.

10. Once Norman Learns Peter Is Spider-Man, Why Doesn't He Just Kill Him?

Instead of luring Spider-Man by going after Aunt May and Mary Jane, why doesn't Norman just kill Peter outright? Peter doesn't know Norman is the Green Goblin, so all he would have to do is get him alone and then shoot him or whatever. Very poor planning for a successful businessman.

11. Why Does Spider-Man Cover For The Green Goblin?

I know that Peter and Harry are friends, but why does Peter cover up the fact that Norman killed a bunch of people? Don't the victims' families deserve closure? Shouldn't police resources no longer be poured into this case? With great power comes great irresponsibility, amirite?

Spider-Man still holds up as a pretty good superhero movie, but clearly, it wasn't perfect. Still light years ahead of Spider-Man 3, though. Never forget.