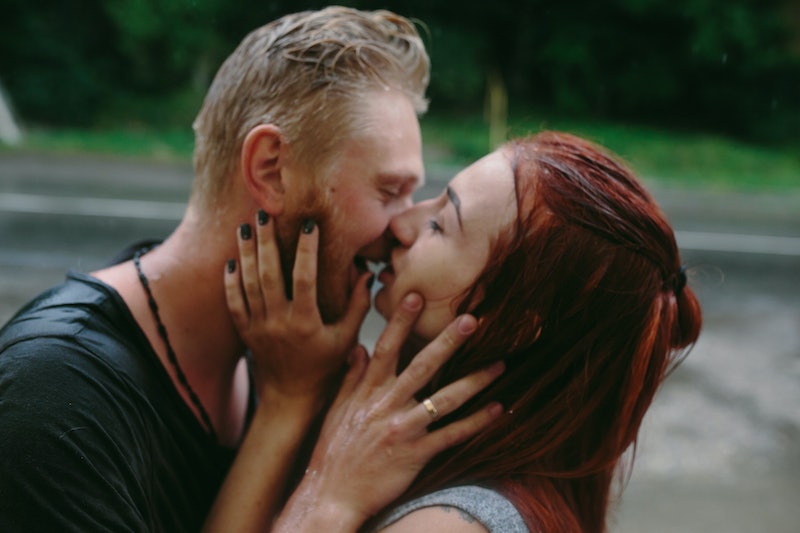 I wouldn't think that impulsivity would top the list of what makes a good couple, but research shows it might be the case. Being impulsive may make your relationship better if both of you are impulsive. While you may think that if one of you is impulsive and the other is not, you'd balance each other out as a couple, new research from University of Buffalo in the Journal Of Research In Personality shows that compatibility is more important when it comes to impulsivity in relationships.

Basically, they looked into how impulsivity in one or both partners had an effect on your overall relationships status. According to New York Magazine, researchers wondered if it could make couples more volatile — that impulsivity could lead to fights and stress— or if compatibility in impulsivity (both partners are impulsive) strengthened a couple and lack of compatibility made it worse.

They found that compatibility was most important, and partners who matched on low or high disinhibition were better off than if they were mismatched in these areas. In fact, they found that it can lead to shared experience if both parts of the couple are impulsive. "Even if impulsive couples fight more or are more likely to overreact to minor slights, their shared impulsivity may also lead them to appreciate things in the same way and to adopt shared goals and values — and, perhaps, to blow a couple thousand bucks on a spur-of-the-moment trip to Disneyland." New York Magazine explains.

But it's not the only personality type that can be related to relationship success. Here are other personality traits that science says make happy couples:

The man who knows happy and unhappy couples —John Gottman— has spent decades studying what makes or breaks relationships. And he says that, statistically, kindness and generosity make you way more likely to stay together. Contempt, on the other hand, can be the kiss of death in a relationship.

An interesting study from University of Illinois looked at over 350 couples and looked not just at the individual personality, but the couple's personality and what type of couples they were. Partner-focused couples fared way better than "dramatic" couples— so it's best to think about your partner rather than Facebook feuds.

My mom always told me "It's a gift to be child-like, and a sin to be childish," and it turns out that the ability to remain playful in a relationship is actually something many are looking for. A study in the American Journal of Play of 320 people— a mix of single and coupled— found that when asked to rank 16 personality traits, playfulness came out on top. And it makes sense, I think an injection of silliness is important in all relationships — it makes the tough times go more smoothly, and being comfortable enough to act like idiots in front of each other helps bring you together for the long haul.

No, not to be married. Engaged with your partner. A study in the Journal of Psychology of nearly 100 couples had them track their fights and found that couples fared much better when they reached out during a fight rather than walking out or becoming unengaged. Showing that you're still invested and trying, rather than abandoning ship, demonstrates how much you care about the relationship as a whole.