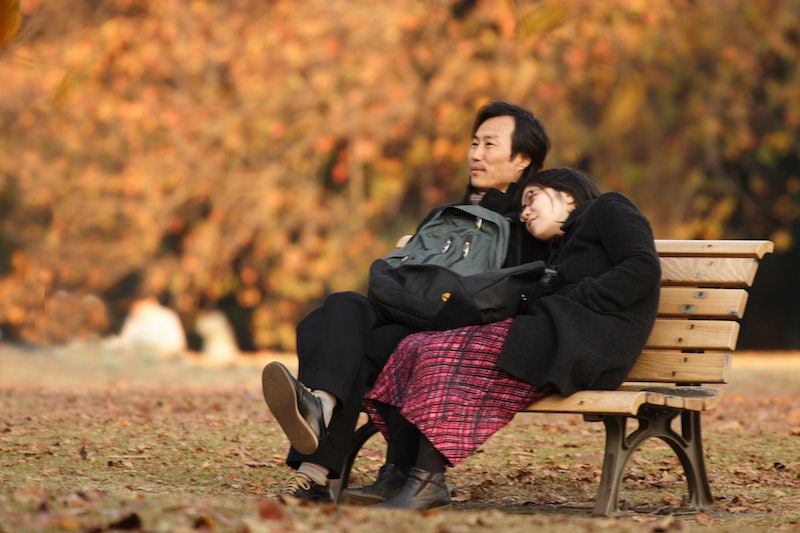 Have you and your partner ever wondered what kind of couple you are? Usually, this line of conversation is answered by a series of increasingly useless Internet quizzes — although it's comforting to have validation that your relationship is clearly a Brangelina — before you move on with your life. After all, as fun as all the millennial navel-gazing may be, real relationships are too complicated and unique to easily categorize... right?

Wrong! As you no doubt gathered from the headline above, researchers have recently classified modern couples into categories. Perhaps more importantly, they've identified which type of relationship is destined to become the Ellen and Portia of their social circle and which ones are likely to go the way of Andrew Garfield and Emma Stone. (#NotOverIt.)

According to the Independent, researchers at the University of Illinois studied more than 350 unmarried couples in their mid-20s for nine months. Here's where it gets interesting: Unlike most current studies regarding romantic love, this particular study didn't focus on individuals within the relationship. Instead, it concentrated on the couple as a unit, including how they presented themselves on social media. Over the course of the study, individuals were asked to note whenever they felt a significant change in their desire to marry their partner — for better or for worse.

Led by University of Illinois professor Scott Ogolsky, researchers used this information as well as monthly interviews to predict whether the relationships would last, which was defined as ending in marriage for the purposes of the study. Unsurprisingly, a couple's chance of "success" was heavily influenced by the amount of conflict in a relationship, but the study noted that it also depended on factors like "satisfaction, love, ambivalence, worries about marriage and leisure."

So what are the four kinds of relationships identified by the study? Let's take a look:

Partner-focused couples are, well, partner-focused. They put significant others above everything else in their lives, although researchers noted that this changed depending on how much time they spent together. This type of couple made up 30 percent of the group in the study, coming in just behind the following type...

Dramatic couples were the most common type, making up 34 percent of the group studied. They're characterized by lots of ups and downs in the relationship, and they don't tend to spend much time together.

Making up just 12 percent of the group, these couples have the most fights — but the underlying relationship is surprisingly strong.

Did you have to suppress an instinctive shudder just now? Socially-involved couples are that couple, aka the type of couple who spends a significant portion of their time interacting on social media (instead of, you know, actually seeing each other.) This group made up 19 percent of the couples in the study.

And now, to answer the question on everyone's minds: Which type of couple stays together? According to the study, partner-focused couples are the most likely to get married, partially due to their high levels of positive interaction. In contrast, dramatic couples are the most likely to break up. If you think you're in a dramatic relationship, don't start freaking out just yet; the results of one research study aren't exactly a prophecy that you and your significant other are doomed to fail. It's a little more legitimate than the aforementioned personality quizzes, of course, but the success of a relationship ultimately comes down to the people in it. Besides, Allie and Noah were the ultimate dramatic couple, and they turned out just fine.

More like this
Are Gemini & Leo Compatible In A Relationship?
By Kristine Fellizar
Melony & Gia Prove That Couples Who Grow Together, Stay Together
By Jessica Morgan
35 Sexy Texts To Send Your Partner
By Griffin Wynne and Carolyn Steber
What Are Swingers? Everything You Need To Know
By Lexi Inks
Get Even More From Bustle — Sign Up For The Newsletter