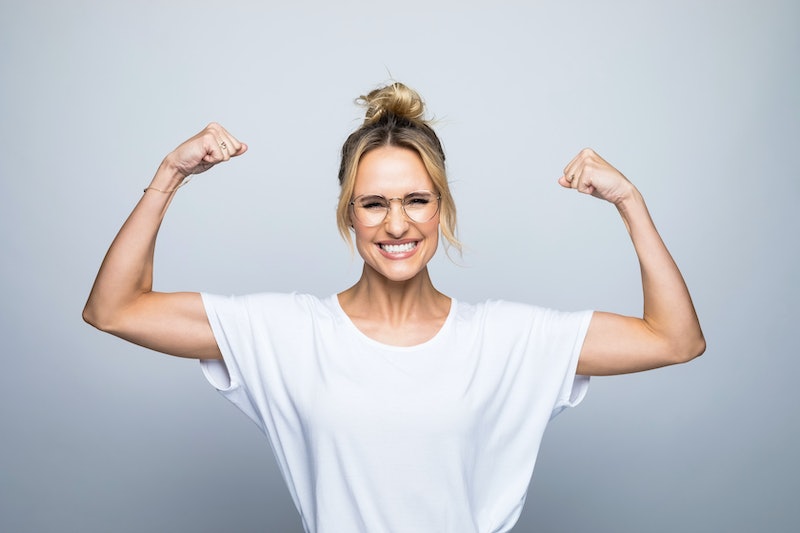 Most of us know Instagram as a purveyor of "woke up like this" selfies, cats with more of an Internet presence than you'll ever hope to have, and carefully-framed pictures of latte art taken with the same meticulousness Michelangelo gave The David — basically, everything that's good in the world. That being said, there are only so many fluffy inspirational quotes a girl can take before it all starts to feel a little stale. Fortunately, there's an easy solution: Iconic feminist Instagrams, which will give any Instagram feed a much-needed dose of gender equality between all the vacation throwback photos and makeup selfies.

Not that selfies aren't an art form unto themselves; after all, there's little that's more empowering than celebrating your body in a society that simultaneously prizes women's appearances and shames them for self-confidence, especially if your body doesn't fit the infinite list of expectations foisted upon it. There's also little that's more subversive than a selfie that unapologetically acknowledges that you look smokin' hot today, no male validation needed. But Instagram has much more than just selfies going for it. Considering the number of young women using the app, it's perhaps no surprise that Instagram features a number of feminist, progressive accounts using the platform to advocate gender equality and other issues facing minorities in the modern day.

In short, if you're looking to add some old-fashioned feminism to your Instagram feed (and who isn't?), you've come to the right place. From well-known celebrities to activists, let's take a look at 11 iconic feminist accounts below.

Flicker could be described using all kinds of labels: Activist, performer, mother, writer, and intersectional feminist all apply. Appropriately, her wildly popular Instagram account is an eclectic mix of politics, gym selfies, inspirational quotes, and general badassery — all with the common theme of empowerment for everyone.

"I've always been political in my creative pursuits, and non-creative pursuits! ...The positive reaction to my account is really heartening. I was told repeatedly that there was no demographic for feminist, intersectional, parenting/motherhood, pro-choice, social justice, voices," she tells Bustle over email. "I suppose my page has proven that thesis incorrect!"

In her own words, Thangiah's art is inspired by "feminism, mental health, and fragments of [her] inner monologue," and her Instagram reflects the wonderfully colorful, empowering results. It can be summed up in two words: Feminist. Unicorn. What's not to love?

Feministastic is exactly what it sounds like: An Instagram dedicated to promoting intersectional feminism, and also punching the kyriarchy in its metaphorical face.

Whether you love her, hate her, or don't get what the big deal is, Dunham is an undeniably influential feminist, and her Instagram reflects that. Her posts often deal with body positivity and her own experiences with sexism in the entertainment industry, including a recent kerfuffle over a potentially Photoshopped magazine cover. (The magazine has denied any Photoshopping.)

"I post not only the finished work, but also some parts of the processes and, sometimes, some personal stuff... It's very important to me to have this closer contact to my public and interact with them," she tells Bustle over email. "I feel it makes my projects more interesting and I also learn a lot from them."

Transgender activist and actress Cox is a hugely important figure in the fight for trans equality and visibility — and let's be real, you're probably already following her.

Founder of the "Stop Rape. Educate" campaign to end sexual assault, Amour's Instagram is pretty much a haven of intersectional feminist ideology, from body positive posts to supporting the work of other feminists.

"I started my account because I wanted to create a safe space for people like me: females, people of color, LGBTQ, and rape survivors. I use my account to send political messages about anything from women's rights to embracing your body hair... I use my account to give a voice to the voiceless and to create a better world by planting seeds in the young minds of today," she writes to Bustle over email.

Transgender activist Janet Mock's memoir, Redefining Realness, is frequently mentioned in discussions of intersectional feminism today. Her Instagram is largely personal and behind-the-scenes photos, which she frequently uses to support other women.

Brooklyn-based artist Ibarreche is known for minimalist designs, which usually feature just a few words. Although the artist told After Ellen that they don't intentionally create queer designs, it's a common interpretation.

"I've always jotted things down on paper since I was a kid. I have to get things out... I write draw and paint in the moment and usually share everything in that moment," Ibarreche writes to Bustle over email.

Whoever said men can't be feminists clearly hasn't seen actor Matt McGorry's Instagram account, where his intersectional feminist ideology is included in the very description. It's hard to decide which is better: The feminist statements or the adorable selfies. (OK, the feminism is obviously better, but his face is a close second.)

More like this
5 Ways To Stand In Solidarity With Women In America From The UK
By Sophie McEvoy
How To Fight For Reproductive Rights, Based On How Much Time You Have
By Courtney Young
American Girl Doll Memes Are Going Viral On Instagram & Tiktok
By Emma Carey
How To Take A .5 Selfie On An iPhone
By Emma Carey
Get Even More From Bustle — Sign Up For The Newsletter