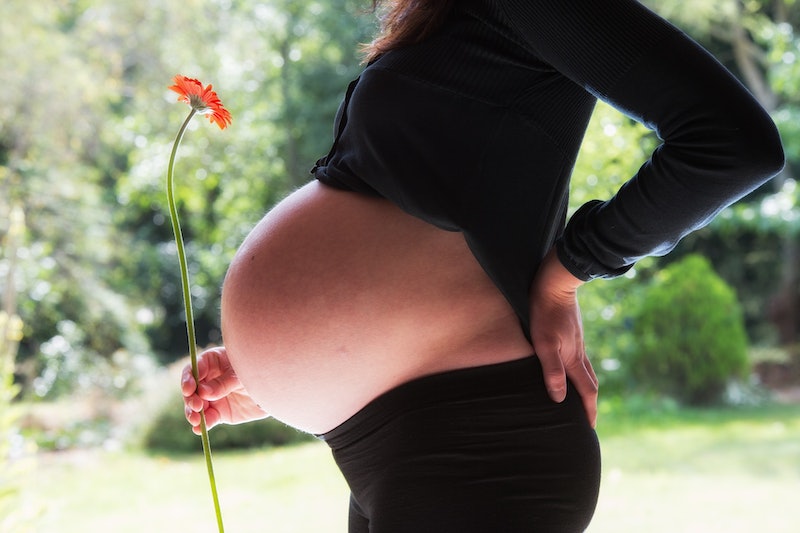 Giovanna Fletcher was body shamed by a stranger 11 days after giving birth to her son. But instead of letting the hurtful interaction slide, the new mom defended her baby bump on Instagram, becoming an inspiration to women everywhere. When Fletcher went out a few days ago, a woman on the street laughed and pointed at her stomach, saying, “Oh look, Mummy’s still got her tummy.” The fact that this stranger thought it was OK to share her candid thoughts openly and call attention to Fletcher’s body and face shocked and confused her. While she laughed and played it off in the moment, the sentiment that she needed to “slim down” affected her deeply, so she took to Instagram.

Fletcher, who is mother to two sons, used this public forum to turn the hurtful comment she experienced into something uplifting and positive. Accompanying a full-length selfie with her stomach proudly on display, she wrote a caption celebrating her bump and the role it played in keeping her newborn safe for nine whole months. “That bump has filled my world with even more love and light than I knew possible. That bump is a miracle worker,” she wrote.

The 31-year-old actress and blogger has been married to the British pop band McFly's frontman Tom Fletcher since 2012. The two share photos and videos of their growing family on their personal Instagram accounts, YouTube channels, and websites. She sees these as forums for positivity, and perfectly expresses that in her caption, “My bump will slowly go over time, but I'll never stop being thankful to it and my body for everything it's given me.”

Her post gained over 61,000 likes in a day as well as numerous comments from women around the world sharing support and their own stories of motherhood. Many women shared similar thoughts, like the Instagram user mrsblueeyes who wrote, "You look great. We should be proud of our mummy tummies. Our bodies have done an amazing job."

Others used the post as a forum to open up about similar uncomfortable stories, like user Kat Donnelly, who commented, "I went to visit my work when my little girl was 2 months old...one lady asked how I could already be so pregnant with another baby then pointed to my tummy 😕 I laughed but inside I was mortified. Looking back I can't believe I didn't tell her where to go!"

Many share feeling too embarrassed to be able to speak openly about their post-baby bodies before, but this post gives them back their voices.

Unrealistic images of celeb moms and impossible transformations splashed over tabloid covers have brought the "mummy tummy debate" to the forefront. There is a false image of how the body “should look” after giving birth, and many feel pressured to exercise to make the bump go away faster. Even when Kate Middleton chose to wear a form-fitting dress that revealed her baby bump in 2013 it caused a stir in the media.

Fletcher's post has helped lift the veil on what it's really like to have a kid, and be proud of one's post-baby body. She is championed by her followers, many of whom echo her positive and thankful attitude. One Instagram follower described her body positive outlook, commenting, "I remember lying in the hospital bed after my c-section thinking wow look how flat my tummy is....then I stood up and it popped out and hit the floor 😂 I still have a tummy now after nearly 4 years and my son loves to rub it as he knows he used to live in there! Haters gonna hate."

More like this
YouTuber Runs Into Margaret Sanger’s Grandson While Filming
By Alexis Morillo
How To Change Your Instagram Bio
By Emma Carey
How To Take A .5 Selfie On An iPhone
By Emma Carey
Side Character Energy Has Arrived — Here’s What That Means
By Sophie McEvoy
Get Even More From Bustle — Sign Up For The Newsletter